Share All sharing options for: Felix Hernandez Reminds New York Yankees That He Exists And Does Not Play For Them

As a fan of the Seattle Mariners, I've learned that high expectations are very, very bad. As of right now, Munenori Kawasaki is hitting .189/.259/.203, good for a .207 wOBA. Before his demotion to Tacoma, Justin Smoak had a wOBA of .254. Since I was expecting Kawasaki to hit like a small stuffed animal, his complete lack of production doesn't bother me at all. Smoak's struggles, on the other hand, are soul crushing, because he was expected to be one of the cornerstone bats for this franchise and he is most emphatically not hitting like one.

So whenever Felix Hernandez takes the mound, I worry. In fact, I'm wracked with dread. My expectations for Felix are so high that I know it'd be virtually impossible for him to match them. He's such a spectacular pitcher that you can expect greatness in every single start he makes. I remember what he's done, and I know that what would be impossible for other, mortal, pitchers is within his grasp. I hold him, in other words, to entirely unreasonable expectations. And I know it.

Felix starts means that I spend half my time angry at him for not being the soul-destroying pitching monster we all know he can be, and the other half angry at myself for being so unfair. When he started at home against the Yankees on July 24th, he threw 117 pitches, giving up two runs over eight innings, and I was disappointed.

I looked at this game on the calendar and knew I'd need to write the game recap for it. I was bracing myself for more disappointment and more self-loathing for silly expectations. I wondered if I'd rather be watching and writing about a pitcher who doesn't surprise me when he gives up runs. I was pretty sure I would be.

I am an idiot.

Felix was on, from first to last. There was exactly one at-bat in which it looked as though he might not be in complete control, and that came in the first inning when Robinson Cano hit the left centre field gap with a line drive double. There was no pressure to throw a no-hitter or a perfect game, which allowed Felix to pretty much do both in a 1-0 win.

Although his raw strikeout and walk numbers weren't phenomenally impressive -- six and two in a nine-inning start is good, but hardly Herculean -- Felix kept the Yankees thoroughly off-balance throughout. This is a team that's scored 515 runs in 105 games so far this year, and we just saw the King blank them on 101 pitches. He wasn't going for strikeouts but rather quick, easy contact. Twenty of New York's thirty plate appearances were over within three pitches, mostly via groundout.

The offence tried their best to help, bless their souls, but ended up stranding eight runners despite hitting Kuroda fairly hard (and having some awful luck). A Mike Carp single in the second inning, bringing home John Jaso from third with two outs, was all that Felix would get, and he made that run hold up, retiring ten straight hitters between the third and the sixth innings.

Before running off that streak, Felix gave up a groundball single to Ichiro that smacked off Carp's glove and trickled into right field. By that point, it was clear that he had more or less his best stuff, and all I could think of when Ichiro was on first was how glad I was that Cano had already gotten his double. If Felix had tossed a one-hitter at Yankee Stadium and it was Ichiro who got said hit, I think many of us would have been prepared to set the world on fire.

Anyway, the future hall of famer was immediately wiped out by an around the horn double play off the bat of Russell Martin, and Felix went cruising. The next baserunner he allowed was Curtis Granderson in the sixth, who walked via the following sequence: 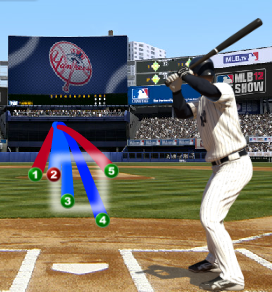 So that was nice. Raul Ibanez managed a much more legitimate walk in the seventh, but that would be it as far as the Yankees were concerned. The game felt over long before it actually concluded -- by the middle of the eighth I was merrily adding a crown to Fangraphs' win probability chart -- and even though the hosts were looking at a one-run deficit with the top of their order in the ninth, there was never any fear that Felix would give it up.

Sure enough, we got two relatively quick flyouts from Curtis Granderson and Derek Jeter before Felix opted to go into an extra gear and wipe Cano out with the last pitch of the game, an 87 mph slider which the second baseman came nowhere near touching. And that was that.

For most pitchers, a 1-0 shutout at Yankee Stadium would probably be the highlight of their careers. Not for Felix. This merely joins the collection of gems that he's spun over the course of his seven-year career. Oakland and Boston in 2007. Kansas City in his third career start. Texas earlier this season. New York again in 2010. Felix Hernandez is a pitcher who is capable of putting in a legendary performance in every start. Perhaps those unreasonable expectations aren't so foolish after all.

But guess what, New York? Felix is ours and you can't have him