Mariners, Twins, And Thoughts On Screenshots

Share All sharing options for: Mariners, Twins, And Thoughts On Screenshots

Hello! Much earlier today, the Seattle Mariners beat the Minnesota Twins 5-4. The Mariners were beating the Twins 5-2, and then they won 5-4. As such, the Mariners clinched the series three games to one, and won the season series eight games to two. The Twins have the third-worst record in baseball so you'd hope that the Mariners would be able to win the season series handily. Had they not been able to, though, it wouldn't really mean that much, since the season series was ten games. If my writing is ever unclear assume that the ultimate point is that none of this is statistically significant, or significant. This is so insignificant. To us. It is very significant to the players, but, are we the players? Gosh I hope not.

I wasn't able to watch any of today's game live, as I was doing other things. Many people would've been busy doing other things since this game began just after ten in the morning out west. This was a game between the Mariners and the Twins, though, and a game between Blake Beavan and Brian Duensing, so it's not like this was a game that would've been unforgivable to miss. If you were wondering whether Beavan looked like the potential new, improved Blake Beavan he's hinted at becoming, he finished with one strikeout and two swinging strikes. If you were wondering how Duensing did for some reason, imagine what you think Brian Duensing would do, and that's basically what he did.

The Mariners scored some runs and then they hung on. They got a few breaks along the way to help them out and without those breaks, who knows? Nobody knows and nobody could know. Without those breaks the Mariners might've lost, or won, or won by more. The M's are now back to within four games of .500 and it's funny how focusing on that number can make it seem important even though it's totally not at all what's important. None of this is important. And now we're back to the first paragraph. 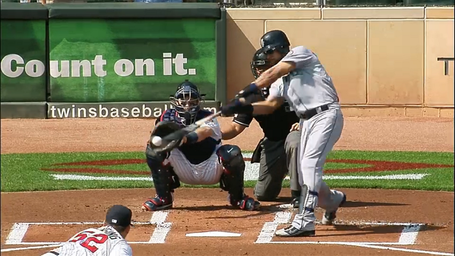 In the top of the first inning, Franklin Gutierrez got that fastball from Brian Duensing and lined it into right field for a double. I can't tell if the screenshot or Gameday makes the pitch seem more outside, but the pitch was several inches outside, in an 0-and-1 count. On the one hand, you generally don't want to see players swinging at obvious balls. On the other hand, Gutierrez hit this ball hard to the opposite field, and he does a great job of covering the plate off either edge. We know that he can punish pitches he can pull, we've seen him destroy balls up the middle, and he's able to go the other way without popping the ball up, like Brendan Ryan does two times a game.

All that is up there is Gutierrez hitting a double against a hittable lefty. But look at his form. Gutierrez isn't a guy like Justin Smoak, where he can't turn his natural talent into productivity. Gutierrez can be pretty consistently productive, just so long as he's pretty consistently able to play. I might recommend that Gutierrez start sleeping inside a pillow fort because you never know when that light fixture on the ceiling might come loose. Of course you never know when you might get suffocated by a pillow in your sleep. Costs and benefits to everything. 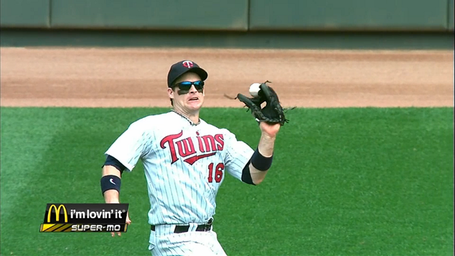 Welcome to how the Mariners scored their third run, and in part how they scored their fourth and fifth runs. There was a time long ago that Josh Willingham was a catcher, but he sure wasn't doing very much "catching" here! I don't even need to write more words, the screenshot is perfect. Note that Jesus Montero made solid contact on this would-be sac fly so it all sort of evened out at Josh Willingham's expense. This was officially scored as a sac fly and an error. It goes into Montero's numbers as a sac fly. What a way to understate the events that transpired. 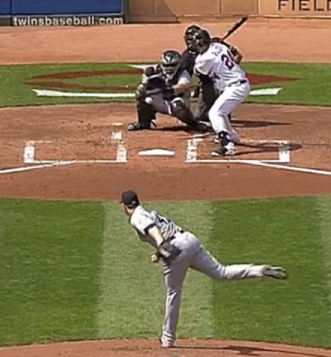 Blake Beavan to Trevor Plouffe leading off the bottom of the second inning. The count was 1-and-1, and Beavan threw this fastball, which was called a ball by Kerwin Danley. Plouffe popped out on the very next pitch so this strike-ball didn't matter for beans. The leverage at this point was extraordinarily low, and matters were appropriately resolved within seconds. But this was one hell of a strike-ball. In Gameday the pitch is hardly even touching the border of the strike zone. This was a Blake Beavan fastball right at the thigh, right over the outer half. Ball? Why does Blake Beavan of all people keep getting embarrassing strike-balls called against him? If Blake Beavan is deceiving the umpires, he might want to set his deception phasers a few more feet forward.

Here's a .gif of the pitch, and Jesus Montero did have to reach over from the intended target. We can't say to what degree Montero's framing or lack thereof influenced the way this pitch was called. What we can say is that Montero made up for it later on in a bigger spot. Or maybe, again, Montero had nothing to do with it at all. It's important to recognize pitch-framing but it's also important to recognize that it isn't always about pitch-framing. Anyhow, a call in the Mariners' favor: 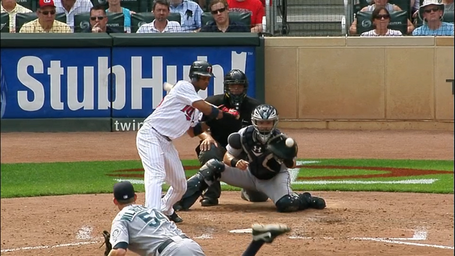 With two on and one out in the bottom of the ninth, Tom Wilhelmsen threw this 1-and-2 curve to Pedro Florimon. Montero caught it, Montero froze it, and Danley called it strike three. The pitch was off the plate away, and because it was a curve, at no point did it actually cross over the plate. This was within the usual lefty strike region, so it's not like the Twins should've played the rest of the game under protest, but this was the most outside called strike of the game to a lefty. This was more outside than two other Mariners pitches around the same height called balls. Wilhelmsen has not had his great command lately and Montero is not the league's greatest pitch-framer, but whether on purpose or on accident, it just so happened that this curve wound up in the perfect place for Florimon to stand still and get rung up. I don't know what would've happened had this pitch been called a ball but I'm glad it wasn't called a ball, because then boy would this paragraph ever not make any sense. 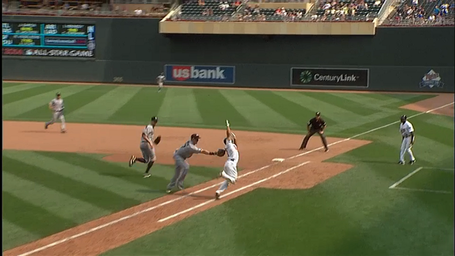 The last play of the game, which started with runners on the corners. Said Justin Smoak:

"He chopped a slow roller to me and all I could do was get to the ball and try to tag him as fast as possible. And he still about got by me. I barely nicked his jersey. I knew I hit him, but I didn't know what the umpire was going to do."

Replays were inconclusive, and of course Smoak was going to say he made contact. Maybe Smoak did make contact. Smoak probably made a little bit of contact. But the umpires were conclusively not in a very great position to see what truly happened, so this very easily could've gone the other way. Revere could've been called safe, and then the tying run could've scored. From there, maybe the Twins win or maybe the Twins lose, but certainly there would've been a lot of people upset at Justin Smoak, even though this was a tricky play involving one of the league's faster runners. Smoak isn't doing anything with the bat and getting a different call on this play might oddly have pushed people over the edge.

Maybe Smoak would've redeemed himself in extra innings with a dinger. I'm going to go out on a limb and say no he probably would not have done that. I can't see any way that the Mariners begin next season with Justin Smoak at first base, and it's going to be very interesting to see where he ends up, and what he ends up doing. The Michael Saunders experience has influenced how we feel about every bust, and it's going to remain that way for some indefinite period of time.