Mariners Play Baseball Game Children Will Be Named After

Share All sharing options for: Mariners Play Baseball Game Children Will Be Named After

However, were it not for this baseball game, those children would've been named Todd. What I'm saying is that their parents are dull and weird and have stupid taste. What I'm saying is that this was not the sort of baseball game you'd name children after, like last year's Game 6 of the World Series. "Hello, I am Game 6 Of The 2011 World Series Jones," children will say in classes. This was just a decent, comfortable baseball game, the sort we've seen on countless occasions from the other side. All those dreadfully dull losses the Mariners suffered over the past few seasons? This is what it felt like to be one of the winning teams. It's all right. I'm not euphoric.

When the Mariners were riding high -- when they were working on that eight-game winning streak -- they really did feel unbeatable. We knew they could be beaten, but we didn't expect them to be beaten, because we'd forgotten what it looked like for them to be beaten. They were getting the important pitches when they needed them. They were getting the important hits when they needed them. Even last Friday, the Mariners entered the top of the ninth trailing 7-2 and emerged from the top of the ninth leading 8-7. That half inning was magical; the Mariners were magical. Nothing could stop the Mariners.

Something stopped the Mariners, that day and the next day and the next day. I kind of cheated because I was out of town and off the grid Saturday and Sunday, but I was still aware of the Mariners getting swept by a good team in Chicago. It was hardly a surprise that it was the White Sox who slapped the Mariners in the face with a dry leather reality check, but it was probably a necessary reality check, since too many people were beginning to get their hopes up about the playoffs. The Mariners refused to lose once, so some people thought they might do it again. The White Sox series reminded us that the Mariners can be beaten, very readily at times, and that the M's had largely been beating up on shit competition.

We all came away from the weekend feeling humbled. More realistic, but humbled. The positive vibes weren't completely dashed outright, but they were reduced as the Mariners had once again drifted a considerable distance from .500. Then the Mariners went to Minnesota, looking to regroup.

With all that said, the Twins are a real team with an all-right offense. They are not an imaginary team, like the Astros. They've played pretty well against the Tigers, Yankees, and A's, and playing the Twins isn't tantamount to an automatic victory. It still means something that the Mariners have been able to just coast right through. It still means something that the Mariners shredded the Indians and the Royals. For the Mariners to beat up on a lower tier is an indication that there's a tier below the Mariners, and in recent years that hasn't really been the case. The Mariners are climbing -- not every single day, but many days, steadily. Games like tonight's are evidence.

We're getting a pretty good idea of where the Mariners stand. They're a good distance away from the American League's bottom-feeders. There was the preseason thought that they could be one of them, but that's not how things have turned out. They're also a good distance away from the American League aristocracy. I guess we didn't need all these words since the Mariners are four under .500 with a +7 run differential. That's what an average team looks like. Fans of average teams shouldn't be too discouraged by losses to good teams, or too encouraged by wins against bad teams. Those are the expectations, and we're in the uncomfortable and novel position of expecting the Mariners to win some games before they start.

By win probability added, tonight's star was Hisashi Iwakuma, who allowed one hit in six innings. The run he allowed was unearned, and if you knew only those things, you'd figure that Iwakuma was outstanding. The reality is that he wasn't; he barely cleared 50-percent strikes, and he had four walks to go with four strikeouts. He also hit a batter, he uncorked a wild pitch, and he didn't look to be the in-control Iwakuma we've seen flashes of before. It should tell you something that Iwakuma was struggling to find his spots and he left having allowed one hit in six innings. A wild pitcher is not necessarily an easy pitcher to hit, since a wild pitcher is an unpredictable pitcher, but the Twins just could not square Iwakuma up and it's the Twins' offense that's supposed to be the respectable part of the team.

The first big offensive blow for the Mariners was a two-run, two-out double by Kyle Seager in the top of the third. After falling behind 0-and-2, Seager worked the count to 2-and-2 and then drove a low fastball to the right-center gap. Darin Mastroianni appeared to take a poor angle toward the ball but he wasn't ever going to be able to catch it and I just wanted to get Darin Mastroianni's name into this recap. Say it out loud. You probably haven't done that before. When would you ever have had reason to? Say it out loud and have fun with it. Darin Mastroianni. He has a name built for highlights. In this highlight, Mastroianni sprinted off in pursuit of someone else's achievement.

The second and final big offensive blow for the Mariners was a three-run dinger by Dustin Ackley in the top of the fifth. Scott Diamond was ahead in the count, and Diamond's whole thing is supposed to be the ability to put the baseball where he wants to. Nothing about Diamond's game is overpowering, so the fact that he's had success tells you that his game is command. Diamond puts pitches in zones and forces the hitter to make the best of a difficult circumstance. Scott Diamond's whole identity is about location and that location ability abandoned him on the 0-and-1 fastball to Ackley. 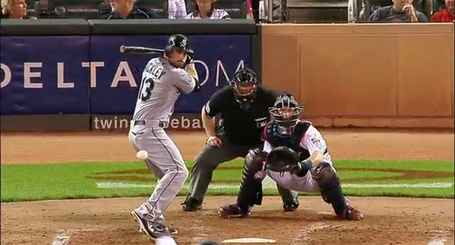 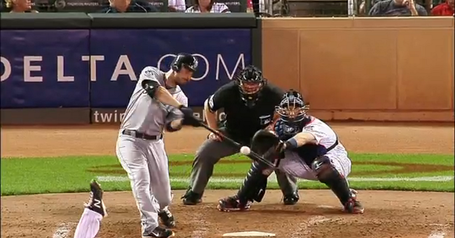 Instead of ending up in that low-away quadrant as intended, Diamond's fastball ended up thigh-high over the very center of the plate. The foot jutting out from the bottom of the second screenshot symbolizes Diamond's sudden and comical death. It's only good to be ahead in the count when you can expand the zone and Diamond gave away his advantage and then some by throwing a terrible pitch that got hit terribly well. Ackley's homer only just barely cleared the fence, but the fence is very tall, and it is very far away from where Ackley was standing. It was a powerful home run. I am not convinced that Justin Smoak could have hit the same home run.

At 5-1 around the halfway point, the game felt well in hand. The Twins weren't threatening to rally, and for an indication of how lifeless they were and how hopeless this was, Ben Revere struck out swinging with one down in the bottom of the eighth. He whiffed at a low curve that got away from Miguel Olivo, and Revere sprinted off toward first. It took Olivo a moment to find the ball on the grass and he picked it up and threw it to first just a split second before Revere arrived safely. The slow-motion replays showed a difference of maybe one or three frames. It was dead even, basically. It was practically a tie, and the call went in the Mariners' favor. The crowd booed a little bit and Ron Gardenhire never emerged from the dugout to complain. Gardenhire could've complained out of frustration, or he could've complained to try to light a fire under his ballclub. Revere's a fast guy -- he would've been good to have on the bases in that situation, along with the extra out. Nothing. Revere was called out and the game quickly continued. Four pitches later, Mastroianni grounded out to short, with Brendan Ryan's throw just barely beating Mastroianni to the bag. Again, no complaint. Managers have demonstrated that they're perfectly willing to argue even when they know they're probably in the wrong. Ron Gardenhire might've just wanted this one to end so the next one can end and then the season can end and then he can drink this shit away, or do whatever he does to forget.

The bottom of the ninth was something of a small adventure, like camping in your backyard when you're six. Jamey Carroll batted with two outs as the tying run, although the implications there are cute. He lined out and the game was over. I could say a little something about Tom Wilhelmsen seeming less dominant than usual, because he's riding a forgettable stretch of four appearances, but over those four appearances he's faced 16 batters so I think patience might be the solution here. If Wilhelmsen keeps it up, we'll say something more. As is, he's earned the right to fight it for a week or two or three. I know it's in our nature to worry whenever there's the slightest reason to worry but that isn't healthy. We should all change our nature. That's a six-word sentence so how hard could it be?

The Mariners are putting last weekend behind them. Tomorrow they throw Jason Vargas against Samuel Deduno and that guy just blows. He's got 37 walks, four hit batters, and 30 strikeouts. Groundballs can get you out of some trouble but getting groundballs alone is like bringing your crampons and forgetting your boots. The last time the Mariners faced Deduno they scored a meager two runs. That might actually be enough, again, just like it was the last time.