Share All sharing options for: Mariners Stifle Twins With Superiority

Hello friends, I have returned to the Internet after a long weekend away, and what better way to return to the Internet than by writing about Felix Hernandez? Monday night, Felix Hernandez beat the Minnesota Twins 1-0. He brought along with him the rest of the Seattle Mariners, which was kind of him, given the misery they just went through in Chicago. In terms of games played and in terms of everything else. I heard about Sunday's weather. I wasn't sad to have missed that baseball.

Felix has been at the center of several memorable games, but among them, of course, was his home debut in 2005. In case you don't remember, Felix made his major-league debut in Detroit, on a Thursday afternoon. The game wasn't on TV and Felix threw just five innings, although over those five innings he allowed 12 grounders, zero fly balls, and zero line drives. On August 9 he showed up in Seattle to face the roughly-.500 Minnesota Twins. I remember there being an unusually vocal crowd, and Felix kept on matching zeroes with Kyle Lohse. Finally, in the bottom of the seventh, Jeremy Reed doubled and Yuniesky Betancourt tripled, driving home the go-ahead run and sending Rick Rizzs into fits of elation. With two innings to go, the last-place Mariners led 1-0.

In the top of the eighth, Felix got two outs and allowed two singles. With his 94th and final pitch, he got Nick Punto to ground back to the mound. Felix left to a standing ovation, and minutes later Eddie Guardado sealed the deal with a 1-2-3 ninth. I haven't written Eddie Guardado's name in some time. Now I've written it twice in this paragraph. Okay.

This was Felix Hernandez and the Mariners against Liam Hendriks and the Twins. This was a mismatch, and a pretty significant one, as major-league mismatches go. The Mariners probably should've won by more than one run. They probably shouldn't have let Hendriks go the distance with a three-hitter. But when Felix is on the mound, the job of the rest of the Mariners is to do enough and then get out of the way. Eventually, the rest of the Mariners did just enough for all of us to come away just thinking about Felix.

Let me talk about Felix some more in the next section. I'm going to break this up into a few little sections because I haven't written for a few days and I feel rusty. Writing is a muscle. You have to keep using it, or else it gets weak, and also it's delicious when marinated and grilled. That doesn't make any sense at all. You see what I mean? Damn this embarrassing muscle.

Some people miss Felix's old ability to keep the ball on the ground. Today, the Twins put 25 balls in play, and six of them came with much in the way of air. Felix generated 19 grounders in this latest complete-game shutout, and while the Twins as a team hit grounders like they're mad at the dirt, this was above and beyond what they might consider to be normal. This was Felix getting grounders with everything.

Felix issued a leadoff walk in the bottom of the second. Against Justin Morneau, he got a double-play ball on a perfect low-away changeup. Felix allowed a leadoff triple in the bottom of the seventh. He jammed Ryan Doumit with a curve, he got Trevor Plouffe to hit an outside slider off the end of the bat, and he got Jamey Carroll to beat the ball into the grass with a first-pitch heater at the knees. Felix allowed a one-out single in the ninth. The last pitch of the game was a low curve to Morneau that he also hit off the end of the bat. Felix was getting himself out of trouble the way the old Felix more often used to get himself out of trouble, on the occasions that he got into trouble.

That Twins lineup that Felix faced is better than you might think it is. You might think what you think about it in part because of what Felix just did to it. Felix just threw his fifth complete-game shutout of the season. His previous season high was one. This was the 11th time this season he's thrown at least eight innings, and in zero of those starts has he allowed multiple runs. In seven of those starts, he's allowed no runs.

Felix's RA -- ERA, but including unearned runs -- is down to 2.56. It was 2.88 when he won the Cy Young. It was 2.77 when he was a rookie. Felix owns his best-ever FIP. This isn't quality writing that you're reading; that's just the numbers that're giving you chills. There are all sorts of adjustments you could try to make and baseball's different now from when Felix was just breaking in, but the long and short of it is that Felix has never pitched better than he's pitching right now, and he only seems to be getting stronger and stronger. It's getting to that point where you want to think Felix gets himself in trouble on purpose, just to see if he can get out. He usually gets out, because he's Felix Hernandez, and Felix can do just about whatever he wants. Even the runs that Felix allows you can feel like only scored in part with Felix's permission.

John Jaso has caught 74 of Felix's innings this season, and over those 74 innings, nine runs have scored. Opponents have slugged .229. Not only has John Jaso turned out all right; he's got the approval of the King.

Facing left-handed hitters, most right-handed pitchers try to live in and around the low-outside quadrant. They'll mix it up from time to time, sometimes on purpose and sometimes by accident, but generally they'll try to go to the same spot over and over and over again. This is one of the things that makes the lefty strike so troubling -- by granting pitchers strikes on pitches off the plate, umpires shift the balance of power. Left-handed hitters don't only have to worry about covering the outer part of the plate. They also have to worry about covering beyond that.

The funny thing is that hitters know exactly what the pitchers are doing. Left-handed hitters know that right-handed pitchers are going to try to get them out on pitches low and away. The location guesswork is all but removed from the equation. But it still works because a quality pitch in that area is really difficult to hit and hit well. You have to get your arms extended, and you have to be able to hit up the middle or the other way. There's no pulling one of those pitches, and hitters love to pull.

In the top of the eighth, Liam Hendriks fell behind Eric Thames 1-and-0. Hendriks came back with a fastball in that low-away quadrant. He might've missed just a little up, but the pitch was still down and the pitch was still away. Pretty much a perfect 1-and-0 pitch to a lefty. 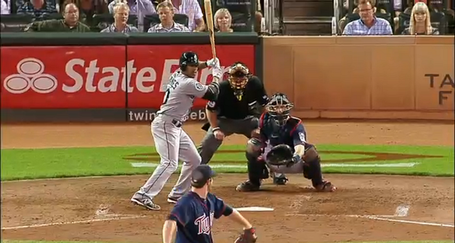 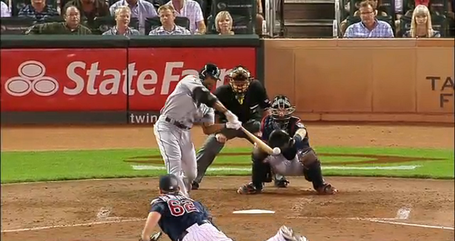 Thames hit that pitch out of the ballpark. Technically, he only hit it out of the playing field, and even then only so barely that the ball immediately returned to the playing field. Thames slugged an opposite-field home run by the narrowest of margins. But a home run's a home run, especially in a scoreless game, and that was a pitcher's pitch. You need to be strong to punish pitchers' pitches and Eric Thames has brawn by the truckload.

What Thames also has are four walks and 22 strikeouts since joining the Mariners. While basically being platooned. The man is all power. But so far he's shown good power, and this hardly seems like the time to be critical of a guy who just gave Felix his run. They all draw straws to see who has to get Felix his run, and today was Thames' turn and thankfully he didn't blow it like some of the rest of those idiots have.

The Mariners have 33 games left. That's not a whole lot of games. Hopefully Gutierrez can get into the majority of them, and hopefully he can perform at a high and familiar level. Right now Gutierrez is the third-most expensive player the Mariners have under contract in 2013, at $7.3 million. It'd be great to be able to look at that and think "yeah, that's not too bad," instead of looking at that and thinking "huh, welp, who knows?" I mean, "who knows?" is always appropriate, because after all, who knows, but I'd like to conclude this season believing that Franklin Gutierrez is a quality regular. Because he should be, God dammit.