Yesterday afternoon, the Mariners were playing the Indians, and in the top of the first inning, Hisashi Iwakuma faced Michael Brantley. With the count 1-and-1, Iwakuma came with a fastball, and this was the location of that fastball: 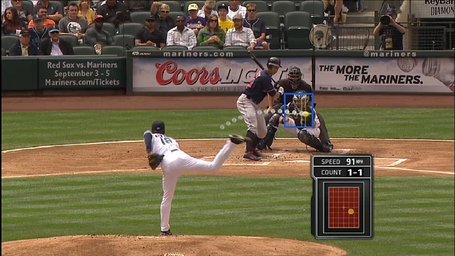 That fastball was called a ball by the home-plate umpire. Matthew immediately tweeted a Gameday screenshot, and for good reason -- the pitch was very clearly a strike. It wasn't even a borderline strike. It was a strike well within the boundaries of the zone. Height-wise, it was at Brantley's thigh. Horizontally, it was about five inches from the middle of the plate, and home plate is 17 inches wide.

Based on my rough calculations, that pitch was located 5.1 inches from the center of the zone. You might wonder, is that the most egregious strike-ball against the Mariners of the season? It is not; it is the fifth-most egregious. Below, the two worst. You should know that .gifs are included after the jump. You would've discovered that anyway but now I have reassured you.

For the second-worst, we've got Blake Beavan and Matt Joyce in Tampa Bay on July 22. Beavan was ahead of Joyce 0-and-2 when he delivered the following fastball: 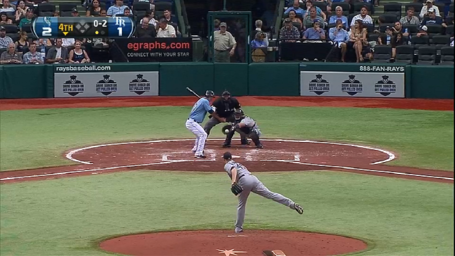 The camera angle really helps us out here. This was a fastball -- a Blake Beavan fastball, so nothing tricky -- and it was above the knees, just to the left side of center, from Beavan's perspective. I've got it at 3.2 inches from the center of the zone. It was called a ball, but Beavan rebounded by getting a strikeout on the very next pitch. Now we move on to the worst.

And we've got Blake Beavan again, against Wilin Rosario in Colorado on May 20. Beavan was ahead in the count 1-and-2 when he came at Rosario with a fastball. Here's a screenshot, and remember that you're looking at things from an angle: 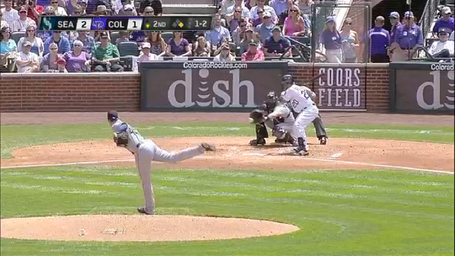 Gameday put this pitch slightly to the left of center, at the thigh. 2.0 inches from the center of the zone. Hold your hand out in front of you. Estimate two inches with your index finger and thumb. It doesn't matter if you accidentally estimate one inch or three inches. The point is that is a very tiny distance! It was by approximately that distance that Blake Beavan's fastball missed the very center of the strike zone in a two-strike count! Ball. Once again though, Beavan picked up a strikeout on the next pitch so it didn't really matter. This post includes mention of two Blake Beavan strikeouts.

Now for the .gifs. And here's the dirty little secret that's no longer a secret: when you see these pitches in motion, you can understand why the Beavan pitches were called the way they were. Maybe not so much the Iwakuma pitch.

You can sense Montero and Iwakuma's frustration. Montero pauses before throwing the ball back to the mound, expecting to hear a strike call and instead hearing the very opposite. Iwakuma also pauses and looks in before basically rolling his eyes. A guy who didn't think twice about the call was Michael Brantley, but then Michael Brantley took the pitch thinking it was a ball so of course Michael Brantley thought the pitch was a ball. It was not, and it also was.

Olivo wanted this pitch low and away and he didn't respond fast enough to the actual location, so he wound up stabbing. The way he stabbed made the pitch look way worse than it was, and you can tell that Olivo knew it, as he jerks his head out of frustration right before throwing the ball back to Beavan. Olivo screwed up, but I think Olivo realized it immediately.

Montero wanted this pitch in and instead it was slightly away. Just as with Olivo, he wound up stabbing, and to make matters worse, the runner on first took off on the play and presumably distracted everybody to some extent. The umpire saw a runner on the move and he saw a catcher reach across his body to catch a fastball. Even though the pitch was practically right down the pipe, conditions were such that it wasn't as obvious as it could've been.

There are people out there who think that catchers don't actually have much influence on whether a close pitch is called a ball or a strike. This post doesn't prove anything, but it does suggest it. So do mountains of other evidence. There is a technique to receiving pitches, and it does make a meaningful difference. Sometimes it can make a difference on pitches that aren't even borderline pitches at all.