Hello! This is one of those posts where I make one post out of a handful of things that might not be deserving of their own individual posts. People who are really concerned with site traffic might recommend that I make these individual posts, meaning the SB Nation network might recommend that I make these individual posts, but I'm not here for the site traffic. I'm here to serve you guys in a way that isn't annoying or overwhelming. I'm a people person. Everything I do, I do for you. Incidentally, there is a "Donations" link along the left-hand sidebar. How did that get there? Huh, weird, I wonder if it works.

Three Mariners notes! We begin with the first Mariners note, and these aren't arranged in any particular order.

(1)
Last night, while the Mariners were putting together a night to remember in Safeco Field, the Rainiers were playing, too, and the rehabbing Franklin Gutierrez slugged a pair of homers. He hit the first off of Zach Kroenke, which is so close yet so far to hitting one off Zack Greinke. He hit the second off of Bryan Henry. Neither of those guys is a top prospect, and combined, they're 55 years old. But those were the only two guys who pitched last night for Reno and Gutierrez couldn't help his opposition identity. The best you can do against whoever you face is to hit dingers, and Gutierrez hit dingers. He showed the power that he showed with Seattle earlier, and that he didn't show with Seattle a year ago.

The Franklin Gutierrez situation is so maddening. It would be one thing if he just kept pulling up with quad or oblique injuries or whatever, and he was clearly just injury-prone. We could come to terms with a player being injury-prone. Gutierrez loses time due to freak accidents, so you feel like one of these days he'll be able to stay healthy, and you also don't feel like that at all. But odds are the next time he's on the Mariners, Gutierrez won't get concussed by an errant pick-off throw. He'll play until something happens. And there are positive indications that he'll play well, if not very well. His defense hasn't slipped very far, if it's slipped at all. His power seems to be most of the way back, and he's young enough.

We still don't know exactly what to make of Michael Saunders, Casper Wells, or Eric Thames. We don't know exactly what to make of Franklin Gutierrez, either. But there are reasons to believe in each, and when you put them together as a group, you increase your likelihood of emerging with at least one or two quality players. I would like to share my September with Franklin Gutierrez, and I would like for him to have a good month once he's returned.

(2)
Last night in Safeco, Jesus Montero hit half as many dingers as Franklin Gutierrez did in Tacoma, but Montero's dinger was annihilated. You talk about a guy covering a slider, and Jesus Montero covered the slider he was thrown. 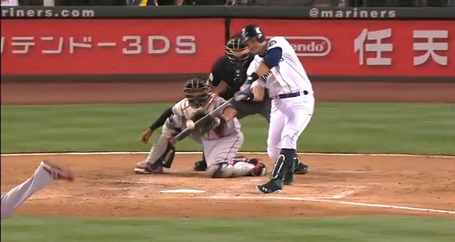 According to the ESPN Home Run Tracker, the ball left Montero's bat at 113 miles per hour, making it the fastest of Montero's 17 big-league home runs. 17 is not much of a sample, but you can see why I'm mentioning this without giving it its own post. It wasn't the longest home run Montero has hit, but speed off bat is the better measure of contact quality, and I'm not going to criticize Montero for hitting a home run with too low of a launch angle to reach the upper 400s in distance. Montero killed a pitch, off a righty, and it was a good moment on the field that was followed by a good moment in the dugout.

We've cautioned you on several occasions against looking at single-season defensive numbers, so I'll just note that Ackley's 2012 numbers are quite good. If you look at Ackley's combined 2011-2012 numbers, he's got a UZR of +9 runs per 150 games, and 23 Defensive Runs Saved. He's been above-average in terms of double plays, range, and errors, which are the only three components. As much as Ackley's bat has underwhelmed, and while he's had the occasional defensive adventure, Ackley's proven himself as a steady, above-average defensive second baseman. Maybe that won't be his long-term position, and maybe that won't be his position as soon as next year, but the Dustin Ackley second base experiment has been an inarguable success. It helps to play next to Brendan Ryan, but Dustin Ackley hasn't been good because of Brendan Ryan.