Usually, when watching a baseball game, you don't think too much about the broadcast itself. You think more about how the game is going, and you get caught up in the drama, and if the broadcast is doing its job well, it's effective without grabbing your attention and making itself the story. In that way, it's like third-base coaches, or umpires. During last Wednesday's Felix Hernandez perfect game, however, I couldn't help but notice how often ROOT Sports switched to the behind-the-plate camera angle when Felix was pitching. This is what I'm talking about: 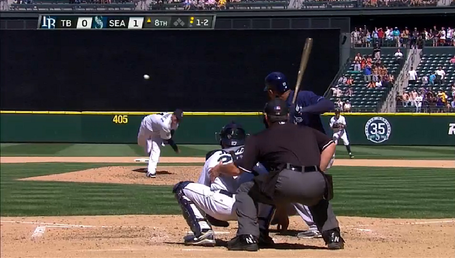 Obviously, whenever a broadcast introduces something unusual like this, it does so because they think it's to the viewers' benefit. From a Drayer article, and from this fanshot:

"We also had the camera behind the plate, which I try to always have for Felix," he continued. "The combination gives you the view of the hitter. Seeing what the hitter is seeing, it's just devastating. Where did the ball go?"

Taken literally, the statement is nonsensical, because what we see are the umpire, the catcher, the hitter, and the pitcher, and the hitter just sees the pitcher, unless we're into some surrealist shit. It does give you a head-on view of the pitch movement, though, whereas the usual view is sort of the reverse, and long story short this seems like the sort of thing that people have opinions of. Probably strong opinions. And I'm curious how the audience feels about this particular camera angle.

Probably 25 percent of the driving force behind this post was having an excuse to make more .gifs from Felix's perfect game. Felix threw a perfect game, less than a week ago! Featured above are parts of it!