Share All sharing options for: Jason Vargas And Pitchers

You might have heard earlier today that Jason Vargas was voted the American League Pitcher of the Month for July. What I didn't know was that these things are up for a vote. I don't know what the alternative would be but I guess not putting them up for a vote? Yes, that's it. Ordinarily we don't pay much attention to these awards, but then ordinarily Mariners players don't win these awards. These awards require that somebody has performed well for an entire month and well you know.

What did Vargas do in July? He started six times, with three starts at home and three starts on the road. He posted a 1.64 ERA, with 13 walks, 26 strikeouts, and four dingers in 44 innings. His record was 5-0 in case you oh god oh god nevermind, nevermind, forget I said anything.

The funny thing about Jason Vargas' July is that it came immediately after Jason Vargas' June, as these things tend to do. What did Vargas do in June? He started five times, posting a 7.34 ERA. He allowed 11 dingers in 30.2 innings, with an oddly better strikeout-to-walk ratio than the one he posted in July. June was when Vargas had that start in Arizona and even Anthony Vasquez was watching that start thinking "I could do better than this pile of crap." Then Vasquez laughed and choked on his own laughter because I assume Anthony Vasquez is as incompetent at everything as he is at pitching.

What did Jason Vargas change between months? The right answer, I'm almost certain, is "nothing". Nothing huge, I mean, although I'm sure he made subtle adjustments. PITCHf/x suggests to me he moved a little closer to first base on the rubber. It also suggests he did a slightly better job of pitching to the edges, which could explain the difference between a lot of dingers and fewer dingers. But for all intents and purposes, Jason Vargas was Jason Vargas, in both months. He looked like himself. In one month, his results were very poor. In the next month, his results were very good.

Pitchers are crazy. Maybe not so much strikeout pitchers, since they minimize the opportunities for crazy shit to take place, but Jason Vargas went right from being a nightmare to being a reliable vet that gets held past the deadline. With a guy like Vargas, the difference between being fine and not being fine is unfathomably small. I guess that's the case with everyone at this level, but Vargas won a Pitcher of the Month award a month after a 7+ ERA. "What?" you might ask. "Pitchers," I'd respond. You would nod and understand and wish I would say more.

I feel like this post hasn't made the point I thought I was going to make. Maybe you understand anyway. And I guess what's most important(?) is that I informed you about the award. The last Mariners pitcher to win the AL Pitcher of the Month award was Cliff Lee in June 2010. Over six starts, Lee threw 51 innings, issuing two walks and allowing 11 runs. haha what?? Here is proof that Cliff Lee was a Mariner once. 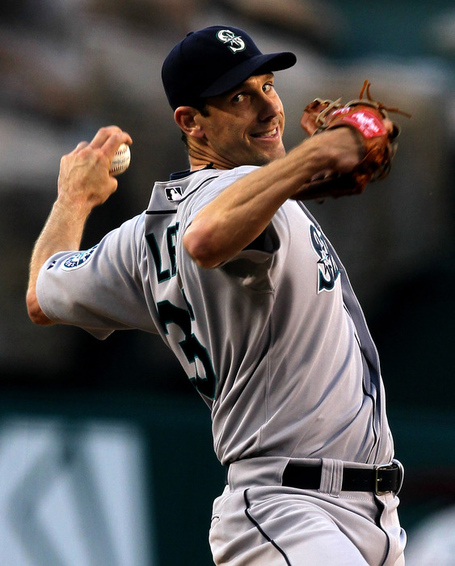