If I had to describe the sensation of an extended winning streak, I would think, "this is a very odd requirement. Why is this something that I have to do?" But if I were then to go on and try to describe the sensation anyway, I'd say that it kind of feels like a baseball vacation. That might not be the best way to put it, but that is the way that I feel like putting it now.

An extended losing streak? That's hell week. You can barely get your head above water, and you end up questioning everything. It all feels like a total waste of time. Tuning in actively bums you out. You lose the ability to feel, or at least to feel about baseball, and losing one's ability to feel is the last line of defense. It's an effective but drastic coping mechanism.

An extended winning streak is a vacation. A vacation without the stress that goes along with preparing for a vacation. Your shed your everyday stress and anxiety and you float along, interested in and excited by everything. You look forward to each day, and to each part of each day. You feel like everything is how you want it to be. You know that it's going to end, but you don't let yourself think about it; that's a negative thought, and this is no time for negative thoughts. This is vacation!

An extended winning streak is a baseball vacation from regular baseball. Of course this isn't real life. This isn't how things usually are; in fact, this isn't how things even infrequently are. One very seldom gets to ride a long hot streak. Everything feels like it's just the absolute sunniest and it's important to understand that things aren't that way. If depression coats everything with a fine layer of negativity, then the opposite of depression coats everything with a fine layer of positivity. Things aren't this good. In the specific Mariners example, the pitching isn't this good, and the hitting isn't this good. The Mariners are a team that should lose; they should lose quite a bit. They're still the Mariners.

But there's a reason why full-time jobs offer paid vacation. Without vacations, people would go insane. Even people with comfortable day-to-day lives. People need breaks, opportunities to unwind, opportunities to interrupt the routine and up and do something different. No matter how much you like your day-to-day life, you can't just always do the things that you want to. On a vacation, you can, and a good vacation leaves you feeling fulfilled, even after it's over.

For as long as this continues, we get to feel like the Mariners are unbeatable, which they aren't, as they've been beaten 57 times, and even several times without Chone Figgins in the lineup. We get to feel the ultimate sports fan confidence, which is so absurd when you look at what the Mariners are but which still feels so natural. You start to see every game as a winnable game. Then you start to see every winnable game as a game that should be won. Winning streaks make people stupid, basically, helplessly and hopelessly stupid, but every sports fan deserves the opportunity to be this kind of stupid. Winning is fun, which is the point. That's the whole point of all of this! Fun! We can have fun sometimes with a bad or mediocre team, but it's so much easier to have fun with a team playing well.

I used to be of the belief that the best, most imaginative writers wrote about bad teams. I still believe that. A bad team basically forces a writer to be creative, if only to find new ways to say "this team is bad." There's a satisfaction that comes from writing about a bad team that I don't think could be matched by writing about a good team. But writing about winning is easier. There's a difference. It's a different sort of writing, and perhaps a worse sort of writing - I don't like what I've written here, for example! - but it's easier because when a team is winning, you feel. Feeling is the foundation of so much of writing. When the Mariners lose to the A's 3-1 on the road, there's not much there. It's next to impossible to feel anything for, which makes the writing a challenge. The Mariners have won seven games in a row now and I just want to express all this enthusiasm I feel in my blood. I don't think it's going well, but look at all of those words! So many words, all of which I've written!

Even the losing is better with a good team, because you feel the losses. There's disappointment in the losses, missed opportunities to gain ground. All we want is to be able to feel, and right now the Mariners are allowing us to do that. I guess you could've just read that sentence and skipped everything before it.

It's interesting that the Blue Jays came into this series with an eye towards the wild card race. They've been crippled by injuries, and right now they're playing without Jose Bautista and J.P. Arencibia on the position-player side. Technically, the Mariners just swept a contender. In reality, the Mariners just swept a team that might right now be worse than the Mariners. Maybe that takes a little bit of the thrill out of it, but I doubt it - seven consecutive wins are seven consecutive wins, and those visiting Blue Jays fans sure were loud. They sure did make their voices heard, before they stopped. It would sure be something if the Mariners ripped off this kind of streak against the Rangers or Angels or Yankees, but we are in no position to be greedy.

This entire streak took place at home, too. I think that's gotten kind of lost in the numbers, but it wasn't long ago that we dreaded Mariners home games, and couldn't wait for them to go on the road so that they could actually score runs. Before this streak, the Mariners were 18-29 in Safeco. They were dreadful, and they were shitty to watch. They'd been outscored at home by 24. Now they're 25-29 in Safeco, and the run differential's coming up on even. They generated excitement at home and then they sustained it over a long period of time. The Mariners scored at least four runs in all seven of these games. They averaged 5.3, without hitting in a single ninth inning. The numbers still show that there are Home Mariners and Road Mariners, but at last the Mariners have given their own fans a reason to be happy they showed up. The idea of going to see the Mariners play in Safeco isn't as repellent as it was not long ago.

Tonight, even though Blake Beavan was pretty good, and even though Dustin Ackley and Michael Saunders each had two hits, and even though John Jaso drove in the winning run, the guy people are going to remember the most is Eric Thames. Thames is the new guy, the major-league bat acquired at the deadline, and in his Mariners debut, he blasted a game-tying dinger. With two outs in the bottom of the fifth, the Mariners were trailing 3-1, with a runner on first. Carlos Villanueva tried to get Thames to swing and miss through a low inside slider, but Thames ripped it out to the right side of center.

This is where the pitch was located: 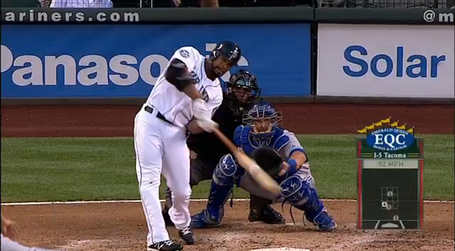 And this is where the pitch wound up: 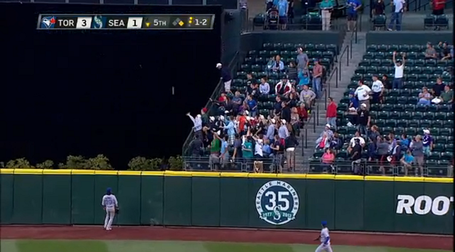 What we learned about Eric Thames was nothing. I guess we learned that Thames has terrific strength and is capable of hitting the ball out to center field in Safeco, but that we could've guessed. Strength is kind of his thing. But there's something to be said for first impressions, and for lifting burdens before they become burdensome.

Not long ago, the Pirates promoted top prospect Starling Marte. Marte is a flawed prospect, but he's a talented prospect, and a hyped prospect. On the very first pitch he saw in the major leagues, he blasted a home run. You think about how often Marte has thought about his debut. You think about what Marte has daydreamed about doing in his debut. First-pitch home run. Immediately, Marte feels like he belongs. Immediately, Pirates fans have a reason to believe in Starling Marte.

Thames wasn't making his major-league debut, and he wasn't making his first at-bat with the Mariners, but this was Thames' first game and he hit a critical dinger. People are going to remember Thames fondly for this, and they'll give him the benefit of the doubt for at least a little while. They'll think of Thames as a guy who can hit a home run. And now Thames already has that first hit and first home run out of the way. That's pressure he just won't have to feel. I guess Thames could have done better by hitting two or three home runs. Realistically, Thames had as good a debut as he could've hoped for.

It's incredible that it worked out that way, and while we'll need to see so, so much more of Thames to form an evaluation, already we have reason to be pleased. Already we have reason to look forward to his at-bats, for reasons beyond his simply being new. I forgot, there is something I learned about Eric Thames tonight: he sounds nothing at all like how I expected him to sound. It's my own fault for not having looked up video clips of interviews, but I was expecting Thames to sound like ... like the physical specimen that he is. I expected his voice to be booming and deep and assertive. Instead he sounds like a guy who might act shy talking to me. I am a baseball blogger and sometimes I go 12 hours between saying words out loud.

Thames had an excellent debut, and the Mariners' bats figured out Villanueva the second time around after doing nothing against him his first time through the order. Dustin Ackley's RBI single was a dead-fish blooper the other way, but considering the Mariners came in with a .253 home BABIP I say the critics can go fuck themselves, the Mariners deserve about 40 more of those. Jesus Montero had a difficult time, but all four of Jesus Montero's at-bats were against right-handed pitchers and apparently the Yankees didn't inform the Mariners during trade negotiations that Montero didn't face a single right-handed pitcher in the minors. This is going to take some work.

Blake Beavan didn't not build on his recent success, and he threw so many strikes to the Blue Jays that Mike Blowers asked Dan Wilson if Beavan should try not throwing all of those strikes. 78 percent of Beavan's pitches were strikes. 78 percent. He's walked one batter since returning from Tacoma over four starts, spanning 28.1 innings, and if you can post a walk and 18 strikeouts over 28.1 innings, you're worthy of praise. Beavan did allow some firm contact and in another ballpark he might've allowed more than just the two homers, but I don't have any complaints about this statistical version of Blake Beavan. If it keeps up, that's something. If it doesn't, at least Blake Beavan had us interested for a time. Beavan generated nine Blue Jays whiffs and he threw just 82 pitches, and remember, this is Blake Beavan.