Share All sharing options for: Mariners Sweep Twins: Some Knowledge To Possess

This afternoon, the Seattle Mariners swept the Minnesota Twins in a three-game series. Did you spot the error in that sentence? Let's try a similar, hypothetical construction: this afternoon, I earned my college degree. Did you spot the error there? Allow me to help. It was not all done in an afternoon! One earns his or her college degree over multiple years. Similarly, it took three days for the Mariners to sweep the Twins. This afternoon, the Mariners completed it. And so concludes a lesson I didn't know I would be including in this post. I swear to you guys these posts are usually a journey for me just like they're a journey for you.

I missed this entire game, but circumstances being what they are, I figured it would be worth a few words. And this isn't the first time I've written about a baseball game I missed entirely. Sometimes I tell you and sometimes I don't because I like to be aware of how easily you can be tricked. How can one be an authority on a game he didn't watch? That's a mighty fine question. A mighty fine question.

(1) The Mariners, at present, are 58-64. They were at one point 37-53. That means that ever since they've gone 21-11, and while it would still be a long shot for them to finish at .500, it's a hell of a lot more realistic than it was just over a month ago. At their low point, the Mariners would've needed to play .611 baseball the rest of the way to finish even. Now they need to play .575 baseball the rest of the way. It's a challenge, but not an impossible one, and of course trying to finish at .500 is completely arbitrary. The Mariners don't get anything for finishing at .500, except for a handful of blog posts and comments about how they finished at .500 after it looked like they would not.

But as long as we're being arbitrary, you know what would be more fun than finishing at .500? Finishing even with or even ahead of the Angels. The Angels lost again today and are now just four games ahead of the Mariners in the standings. Four games is a big hurdle with but a fraction of the season left to play, but on the other hand, the Mariners have gained four games on the Angels over their last four games. The Mariners are playing better, the Angels are in an inexplicable nosedive, and the Mariners still play the Angels another nine times. It's possible that, with the Angels' help, the Mariners could pull off something we couldn't have dreamed of back in March.

Again, it's arbitrary. If you're not making the playoffs, you're not making the playoffs, and the Mariners have distanced themselves from the race for a high draft pick. The 2013 Mariners roster isn't going to look better or worse based on whether the 2012 Mariners passed the Angels in the standings. But this would be so unbelievably satisfying. It would honestly make me feel better about the 2012 season all offseason long. If you can't find satisfaction in making fun of the Angels then it wouldn't matter which way a doctor takes your temperature because you are dead.

(2) Once again today, Blake Beavan was all right. Beavan started a dozen times before getting sent to Tacoma. Since coming back, he's started seven times. Some splits that might or might not be meaningful, in the same vein as the Felix Hernandez splits from a few days ago, after he threw his perfect game, which he did, on Wednesday:

This afternoon, Beavan was all over the strike zone, and he also got the Twins to put the ball on the ground. You see improvements in all the big categories in the table above, and while the improvements are modest and while Beavan still doesn't look like a guy you want towards your rotation's front, he's looking more like a guy you wouldn't mind having towards the back, instead of looking like a sixth or seventh starter. As we say almost every single damn time, this isn't conclusive and we could use some further evidence, but Blake Beavan is still making himself worth talking about. When I used to try to think about Blake Beavan, my brain would be like, nah, I'm not gonna do that. Now my brain is like, okay, I trust you. I don't know what my brain has been talking to, he's the guy in control of everything, and he's so alone up there :(

(3) Today, the Twins issued seven walks, and the Mariners issued five walks. Today, Phil Cuzzi called one hell of a tight strike zone. I guess that doesn't actually matter, but consider that Blake Beavan threw 72 of 97 pitches for strikes despite that being the zone he was working with. And consider that, while Samuel Deduno walked the world, that was the zone he was working with. I did watch some video, though, and it didn't seem like Deduno had any idea. So that certainly didn't work in his favor. Of Deduno's 35 attempted curveballs, just 18 were strikes, and I imagine precious few of those strikes were where he wanted them to be. Case in point: Jesus Montero's double play in the third. Deduno was ahead 0-and-2 and did this: 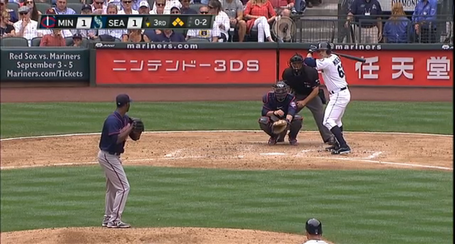 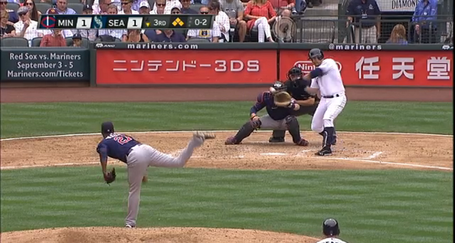 (4) Against Deduno, the Mariners put 18 balls in play, and 14 of them were grounders. Deduno did nothing but generate balls and grounders and now the Cleveland Indians can't wait to make him their own.

(5) For the first time since July 24, Michael Saunders hit a home run. He also singled and got hit by a pitch, but it's the home run that we care about the most. After his previous home run, his OPS was .750. Now it's down at .690, and we're just crossing our fingers for an encouraging final chapter. The pitch he drove out was a low, inside fastball from Jeff Gray in a 1-and-0 count. It was supposed to be a low, outside fastball in a 1-and-0 count, but there's a reason why Jeff Gray went so long without pitching when he was a Mariner, and there's a reason why Jeff Gray is with his third organization in less than two seasons. Relative to other big-league pitchers, Jeff Gray is not a very good pitcher, and now his season ERA is 5.59. He has about as many walks as strikeouts. He is fourth on the Twins in appearances. The Twins haven't had a really good season.

(6) Josh Kinney threw 43 pitches, and 34 of them were breaking balls. Kinney recorded his first-ever big-league save. I think it's safe to say that Josh Kinney put his Josh Kinney stamp on it.