Late in the afternoon today - or early in the evening, we've had this debate before - I decided to go on a drive. I thought it'd be an effective way to clear my head, I felt like seeing the mountains, and perhaps most importantly, it was like a hundred degrees and by that point in the day my apartment walls were melting and I needed to escape. My car is not new, but it does have air conditioning, so I thought I'd put myself in front of some air conditioning for a handful of hours.

I kept on driving, and before long it came time for the start of the Mariners game. I don't often listen to the Mariners on the radio since I'm usually at home so this was a rare experience. Around 7, 7:05, Ken Levine talked about how it was time for the Mariners to turn the page, with the start of a new series upon them after Wednesday's perfect game. As Levine was talking, in the background you could hear the ovation during Felix Hernandez's pre-game ceremony. All the crowd was thinking about was the perfect game. All I was thinking about was the perfect game.

Hisashi Iwakuma retired the first 12 Twins batters he faced, and we were all thinking about the possibility of consecutive perfect games. If not that, then consecutive no-hitters. That, of course, was insane, since this was Hisashi Iwakuma with still more than half of the game to play, but for us, today, it didn't feel insane at all. For the first time in God knows how long, Wednesday showed us that our wildest dreams might actually be realized. We had a wild dream tonight. Retire the first 12 and you only need to retire another 12, and three more.

Justin Morneau led off the fifth with a double. Four of the first five Twins batters in the inning reached base, and they scored a run while leaving the bases loaded. In a flash, it was all over, and we were reminded of how quickly other teams' batters can make productive things happen. But for an idea of how that half-inning felt, I give to you a Mariners.com front-page screenshot: 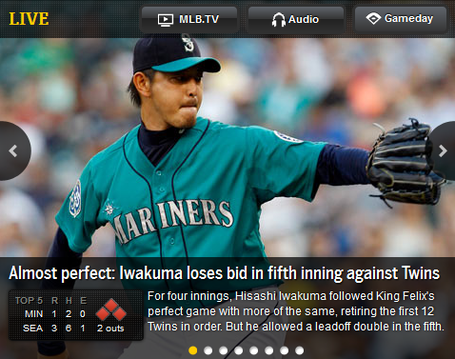 "Almost perfect." Four innings. Mariners.com was right there with us - Iwakuma wasn't close at all, but as he was progressing, we felt like it was doable. We felt like Iwakuma could achieve the near-impossible, because Felix achieved the near-impossible, and now that we've seen a Mariners pitcher throw a perfect game we'll see the possibility of another perfect game everywhere.

Iwakuma would settle for seven innings of simply being very good, even if he was facing a starting lineup a third of which was just hired earlier today from a Radio Shack. The Twins scored just once against Iwakuma, and they struck out six times while drawing one walk. Whatever stock Iwakuma has built up lately as a starting pitcher, he didn't give anything back tonight; he kept on building and building, even with the broadcast still openly complaining about his pace. One gets the sense that Dave Sims wouldn't mind never seeing Iwakuma pitch again, but that's just me speculating and that isn't fair. I can't get into Sims' head, and I don't even necessarily disagree, since slow pitchers are maddening pitchers. But when Iwakuma is slow and effective, I've little reason to complain, because outs are what make the game go and Iwakuma can generate his outs.

I'm writing this very quickly because I have plans and I'm trying to get out the door. So I'm not going to touch on everything, but I will say my enthusiasm for the Mariners having scored five runs in eight innings at home is tempered a little bit by their having faced Nick Blackburn. Blackburn was removed with one out in the sixth having allowed 11 hits and I had to check to make sure his ERA had gone up. It did go up, by 0.06. Blackburn came in a relative pile of shit and he finished with a line that would qualify as a relative pile of shit. The Mariners did nothing against the Twins' bullpen but by that point the game was already in hand. When you lead the Twins 5-1 in the bottom of the sixth, you can probably start thinking about the next game, or about the previous game, if the previous game was a Felix Hernandez perfect game, which in this instance it was.

The neatest thing offensively was John Jaso drilling another home run. He tore a high-and-tight Blackburn fastball out to right on a line, pushing his season total from a career-high seven to a career-high eight. Jaso also walked and singled and has his OPS up to .902. The one out he made required a spectacular diving catch by whoever the Twins' shortstop was. I just wrote more than a thousand words about John Jaso earlier Friday so I don't need to go back into detail but every little demonstration of his power and awesomeness is further evidence that this is the real John Jaso, and that the older John Jaso, the John Jaso the Mariners thought they were trading for, is in the past. This new version is incredible, even if the most he could do today was homer off Nick Blackburn. It's not like he had the option of facing a better starting pitcher.

Miguel Olivo also homered on a first-pitch curveball at the thigh over the center of the plate. For a few minutes, Jaso and Olivo were tied in dingers until Olivo pulled one ahead. After tonight, Olivo is now 12-for-24 against Blackburn in his career with four dingers and seven extra-base hits. That's still not a big enough sample for me to consider meaningful, but maybe this does have the makings of a good matchup, where Blackburn stays around the zone and is among the very most hittable starters on the planet. Olivo's an easy guy to get out when you let him do the work, but Blackburn isn't that sort of pitcher. Blackburn isn't in the business of making guys chase pitches way off the plate, and that might be exactly what Miguel Olivo needs. Or it might not. Maybe it's as simple as Nick Blackburn being not good and Miguel Olivo being capable of hitting not-good pitchers better than good pitchers.

Trayvon Robinson doubled. Eric Thames doubled. Again, Blackburn, so whatever, and maybe this is where I should be complaining about Kyle Seager going 0-for-4. Brendan Ryan went 0-for-3 but I always kind of assume that Brendan Ryan will go 0-for-3 and then anything beyond that is a bonus. I'm going to stop talking about the offense now because it faced Nick Blackburn and because I'm in a hurry.

Tonight they were selling off Mariners players "favorite things" baskets prepared by their significant others. Brendan Ryan's basket was labeled "Brenden Ryan." Blake Beavan's basket was labeled "Blake Beaven." The labels were presumably prepared by some intern, and not by the significant others, but that's just a little bit embarrassing, and almost as embarrassing as taking home a Blake Beavan "favorite things" basket. I didn't get a look at what was inside Beavan's basket but, hunting gear. If it's a white baseball player it's always hunting gear. And hunting books and binoculars. Whenever white baseball players try to have get-togethers they never find each other because they're all wearing camouflage.

So the Mariners honored Felix's perfect game, they won a baseball game, and now we can all go back to thinking about Felix's perfect game again, if anyone stopped. If you don't like the feeling of all this positivity, Stephen Pryor allowed back-to-back home runs in the top of the eighth to Joe Mauer and Josh Willingham. Mauer clobbered a low inside slider, and Willingham clobbered a 2-and-2 fastball after Pryor shook off Olivo calling for a slider. It's helpful to have these reminders that Pryor is hittable in comfortably winnable games because it'll make us appreciate when he's unhittable in games that're more tense. Every cloud really does have a silver lining. There is a positive spin you could put on literally any event. You're dying, you say? Good news, Earth!

Baseball tomorrow night. Until then, did you know that Felix Hernandez threw a perfect game on Wednesday afternoon? Wow!