From Felix's debut, or maybe even from before then, we've been waiting to see an image like this one: 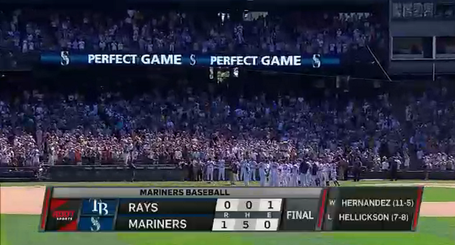 Sure, it was unfair to just expect a guy to eventually throw a perfect game or a no-hitter. Perfect games and no-hitters are hard! Felix had made several bids before, but he'd never gotten this far, he'd never gotten to the end, and in an odd and unjust way, we were disappointed. Felix, too. On the one hand, we were all being greedy and presumptuous; on the other hand, it was a testament to Felix's skill. "That guy, right there? He's going to throw a perfect game. You watch. He's overdue." Felix has been the kind of pitcher where you see a game like this coming. The game came.

This is not the post-game recap. I don't even ... this is not the post-game recap. This is a post to celebrate King Felix Hernandez, and to celebrate the King's final pitch. With two balls and two strikes on Sean Rodriguez, Felix threw a 92 mile-per-hour changeup exactly where John Jaso wanted it in the low-inside corner. Rodriguez didn't offer. Rodriguez didn't complain. Rodriguez turned around and went away, just like the previous 26 Rays hitters had all done. The Mariners surrounded the king - the king of them, the king of all of us.

We always knew that Felix Hernandez was perfect. Now it's official. Every last one of us can now forget that J.D. Drew ever existed, as Felix has thrown his gem. Now we celebrate and reminisce, until the next one.