Maybe that sounds really simple, or really obvious. But the viewing is different when you're watching a non-contending team, as opposed to when you're watching a contending team. As long as the dream of the playoffs is alive, all you want is to win, and it doesn't matter how the wins come. It doesn't matter if the win is assigned to Chris Davis after he pitches in relief. You just want the team to keep winning because you want to see the team in the playoffs because you want to see the team win the World Series. That's always the priority. Winning now, so you can be the last team to win.

It's not quite like that when the dream of the playoffs is dead. Maybe it is for some people, but it isn't for many of them. I don't mean to pick on, say, Miguel Olivo, Chone Figgins, and Kevin Millwood, but if the Mariners won a game because Kevin Millwood was awesome, Miguel Olivo was awesome, Chone Figgins was awesome, and everybody else was shitty, I wouldn't be thrilled. If the game were entertaining, then sure, I would've been entertained, but what if the Mariners won that game 5-1? What if Olivo homered twice and Figgins went 3-for-4 and nothing else out of the ordinary took place? That's not the kind of game that I want to be watching in August, not in a season like this. I either want to be entertained, I want to believe the young players will turn into good players, or both. It's awesome when it's both.

The Mariners didn't have an interesting young starting pitcher on the mound tonight. Jesus Montero went hitless. Justin Smoak's short swing produced a couple of flies short of the track and a double that was just a ground ball into left field. Dustin Ackley had three hits but one was a bloop and one was an infield single so it's not like he was spraying line drives. Trayvon Robinson went hitless. This was not a terrible game for the young players, but it wasn't a great one. It wasn't a game that leaves us convinced that better days are ahead. But the way this game ended made it all worthwhile. The end of this game was most certainly entertaining. In retrospect, I would've been happier doing something else last night, instead of watching the Mariners. Tonight, realistically, I think I would've been happiest watching the Mariners. I'm assuming that this is between watching the Mariners and, I don't know, going to a bar, instead of between watching the Mariners and going on vacation to Greece. Then I'd be happier going on vacation to Greece.

For eight and a half innings this was not much of a baseball game. It was close, sure, and it put the Mariners in position to walk off, but it's not like viewers were on the edges of their seats. Kevin Millwood was very good and very close to not being very good. For Millwood, this was one of those games where he gets himself into too much trouble and then pitches out of it. When that happens announcers like to give Millwood credit, assuming it's a function of his being a veteran, but when Millwood gets himself into too much trouble and then doesn't pitch out of it no one says a peep. Coming into today, Millwood had allowed a .648 OPS with the bases empty, and an .842 OPS with men on. Kevin Millwood doesn't possess some special, veterany ability to pitch out of jams on a consistent basis. He can just pitch out of jams sometimes, and he pitched out of jams often tonight.

Matt Moore, meanwhile, pitched like Matt Moore was supposed to pitch all season long. Moore's a guy with a mid-90s fastball and a 4.6 strikeout-to-walk ratio between double-A and triple-A. Last offseason Baseball America ranked Moore as the second-best prospect in the world, and it was conceivable that he would be a contender for both the Rookie Of The Year and the Cy Young. Maybe not the Cy Young, due to innings limits, but Moore was supposed to be amazing. In that regard he's been somewhat disappointing, which isn't fair but which is what it is, and tonight he looked more like Matt Moore. No - tonight he looked less like Matt Moore, and more like the preseason vision of Matt Moore. Those two might now be coming together.

Moore dominated the Mariners for seven innings and as much as I usually assume that the Mariners getting shut down is the Mariners' fault, Moore's just a special talent and this was probably mostly on him. Then Joel Peralta pitched a 1-2-3 eighth and the Mariners were going to have to beat Fernando Rodney if they wanted to survive through nine. Their offense was Miguel Olivo doubling home Justin Smoak with a rocket after Smoak had doubled on that grounder. I'm not going to say that Smoak didn't hit the grounder hard, but it was a groundball double, and what we want to see are line-drive doubles. And dingers. Good offense, basically.

The Mariners didn't let the Rays do much, but the Rays didn't let the Mariners do much, and for eight and a half innings the Rays' two-run first stood up. Joe Maddon handed the ball to Fernando Rodney so he could pitch against the 4-5-6, which sounds more intimidating when you leave out the names. I felt a sensation of certain doom, and where I never felt that way about Fernando Rodney before this season, he's had such a season that my mind's already taken the new Rodney into account. The new Rodney is impossible.

And something extraordinary happened. Kyle Seager led off with a single, and that's not what I'm talking about, although that was terrific. No, the extraordinary thing happened next, when Chone Figgins pinch-hit for Casper Wells and put down a bunt.

The idea was fine enough. The Wells vs. Rodney matchup was a poor one, and if nothing else, Figgins is a pretty good bunter. A successful sac bunt would give the Mariners two opportunities to drive the tying run home from second. Rodney missed twice, then Figgins fouled off a bunt, then Figgins dropped a bunt between the mound and first base. Carlos Pena rushed over to field the bunt and consider his options.

Pena looked first at second base, seeing if he could throw out the lead runner. Seager doesn't run very well, but Pena didn't have a good play, so he turned to first. Pena double-pumped, but first base was covered, and Figgins wasn't yet close. All Pena had to do was lob the ball to first base in order to record the out the Mariners were giving away on purpose.

Pena was not far away from first base. Carlos Pena won a Gold Glove in 2008. This was not a challenging throw to make. The out was right there for the taking. It's not like Pena's footing gave out. This was the idea of the play, simplified: 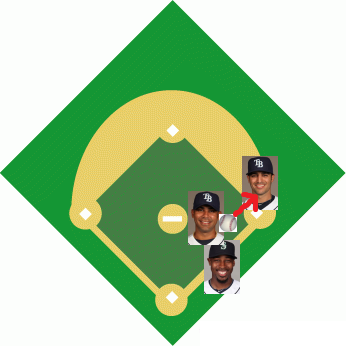 Baseball from Pena to first base, Figgins out, one away. This was the reality of the play, simplified: 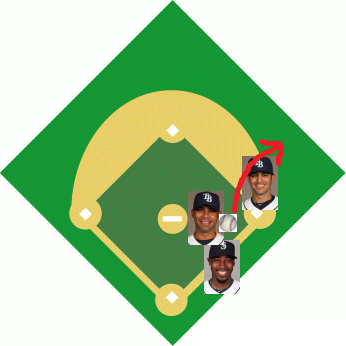 Carlos Pena aimed at first base, and Carlos Pena missed. The throw got away, and instead of the Mariners having one out and a runner on second, the Mariners had none out and runners on second and third. Matt Garza was like "that was the shittiest throw I've ever seen!" I wouldn't even be able to explain it. It's like the first part of the play was this play, and then the second part of the play was some other play, a more challenging play, like a swinging bunt down the third-base line. I do not know how Carlos Pena threw a baseball that wild from that little distance. Maybe he panicked. He knows that, while Chone Figgins can't do much, what Chone Figgins can still do is run. Pena had just double-pumped. But Carlos Pena barely even needed to throw the baseball at all. He practically could have handed the baseball to first base. He practically could have touched first base with the baseball. He tried to throw the baseball and he missed. He just missed. It was like an egg toss where instead of tossing the egg gently to your partner you accidentally throw the egg at a car in the parking lot to your left. Carlos Pena committed an inexplicable error, and instead of having the odds against them, the Mariners had the odds strongly in their favor.

That wasn't it, and the Mariners still had to drive in a run or two against Fernando Rodney, but Pena made things a whole hell of a lot easier. Justin Smoak got a belt-high changeup in the middle of the plate and drove it not even to the track, but still deep enough to score one run. We can talk more about that another time, when the focus is on Smoak and not a blown save. That left the winning run on third with one out, and up came Miguel Olivo while John Jaso watched intently from the bench. The Rays brought in a fifth infielder and Miguel Olivo struck out and the Rays put their fifth infielder back in the outfield. It was the only possible sequence. Olivo struck out swinging even after getting ahead 3-and-1. In case you were wondering Miguel Olivo is still Miguel Olivo, and he wears that shit proudly.

Thames took a ball. He swung at a changeup low and away, off the plate. That could've ended the inning right there. And it did end the inning, as Thames lifted a flare just over second base. It wasn't a great pitch to swing at, and it wasn't solid contact, but it was solid enough contact. Maybe this was a case where Thames' build came in handy. He muscled a ball off the end of the bat and came through with the first walk-off hit of his career. The Mariners rallied past Fernando Rodney, in part because of the Mariners, and in large part because of Rodney's first baseman.

Every time Rodney celebrates a save by shooting an invisible arrow, Carlos Pena comes over to ask where the arrow went. The next time, that's going to be weird.

If you were watching and you left the TV on, you got to witness one unusual postgame celebration. Eric Thames was the on-field interview and John Jaso got him with a shaving cream pie, but Thames had his mouth open at the time of the assault. He spit a lot and concluded the interview by exclaiming "Go Mariners!" It was as if Eric Thames had been replaced by one of those Men In Black aliens and he had absolutely no idea how to behave in such an unfamiliar situation. Thames was unmistakably giddy but the interview was memorable not for his words.

The Mariners won. It was crazy. For eight and a half innings, I didn't have a damn clue what I should write about. Then Carlos Pena suffered a mid-play aneurysm and the Mariners came back out of nowhere. Kevin Millwood, to his credit, finished with a walk and eight strikeouts, with 13 swinging strikes and a bunch of groundballs. Though his location came and went, Millwood was a lot more good than bad. Against a team that's currently in position to go to the playoffs. People aren't going to remember this evening for Kevin Millwood, and Kevin Millwood probably doesn't give a damn. This was all about the very end, and sometimes the end is the only thing that matters.

Tomorrow brings Felix, and it brings him in the early afternoon. For a while, it looked like we were at least going to have a quick turnaround before we could forget about this game entirely. Now, who would want to?