Saturday, the Rangers beat the Tigers. Saturday, the A's beat the White Sox. And Saturday, the Angels lost to the Mariners. As things were Friday morning, so they are Saturday night, only with two fewer games left for everyone. That's good news for the Rangers, who are in a position of power. That's good news for the Mariners, since that's two games closer to no more games. And that's bad news for the Angels, who are trying to climb. Two days later they're exactly where they started. They did some stuff in the middle, but nothing was ultimately gained. It's like the Angels spent two days on the couch playing Bejeweled. They can still accomplish the tasks on their list, but now they have less time to do it.

It's interesting that the Mariners did what they did considering the guy they were facing. At the end of May I went on a week-long vacation on a boat. The boat was in the water and moving, I didn't just get onto one and camp. I wasn't going to be able to watch the Mariners for the duration, so the last Mariners game I watched before the trip was on May 24. The Angels played the Mariners in Seattle, and the Angels beat the Mariners 3-0. That score sounds close, but the game wasn't - Dan Haren went the distance, and Dan Haren struck out 14 of 31 batters. There had been some questions about Haren but he answered them all and then some with a staggeringly dominant performance. Everything he wanted to throw, he threw, and everything he wanted the Mariners to do, they did. The Mariners made zero adjustments. Haren mixed his pitches into a puree, and he located them as if he were walking the ball right to the glove.

That was what Dan Haren did, and as weird as it was for me to not watch the Mariners for a full week during the season, what I told myself was that Bud Selig had watched them face Haren and then they got immediately contracted. "Yep, this doesn't serve a purpose." I haven't been able to shake the memory of that game. Maybe I never will. We've seen the Mariners get shut down by worse pitchers lots of times, but Haren made them fail like he'd trained them.

Tonight Dan Haren lasted 19 batters, and he got just ten of them out. He walked three and he struck out zero. In consecutive starts against the Mariners, Dan Haren dropped from 14 strikeouts to zero strikeouts. He generated one swinging strike. In May, he generated 19 swinging strikes. He wasn't helped by his defense, sure, but he walked Brendan Ryan to load the bases. Trayvon Robinson hit a line-drive RBI single. Dustin Ackley ripped a two-run single in an 0-and-2 count. John Jaso went deep in a 1-and-2 count. Dan Haren deserved maybe a little better than he got, but Dan Haren was not good against the Mariners and the Mariners actually drove him away from the mound.

I was not expecting that. Not a single part of me was expecting that. If part of my brain were to chime in now by saying "I expected that!", I'd watch Leap Year over and over on repeat until that part of my brain couldn't function anymore because it was clearly badly fucked up. Something else I don't expect is knocking out the opposing starter after ten outs and then seeing only one more pitcher the rest of the way, but I don't care about Jerome Williams' long relief. By the time Williams came in, the game was well in hand, he says as if he's completely forgotten the events of last night.

Last night John Jaso homered to right and this afternoon I wrote about his power boost. Tonight he homered to right and in so doing showed another sign of his power boost. Jaso's now up to an .881 OPS. Last night he pulled an outside fastball on 3-and-0. Tonight he pulled an inside fastball on 1-and-2. It's not a perfect screenshot, but this is the pitch that Jaso destroyed: 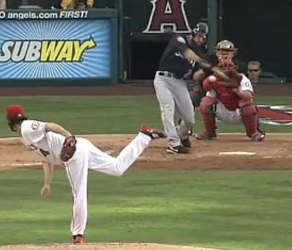 You could say that, last night, Jaso had a chance to get his arms extended. They say you never want to let a power hitter get his arms extended. The homer tonight was the result of super quick hands in a defensive count. In terms of pitch location, perceived velocity is at its greatest in the high-inside quadrant. Jaso recognized this pitch and knew exactly what to do with it. Remember when it seemed like Eric Wedge didn't believe in John Jaso? We can laugh about it now. In fact, with Jaso and Hisashi Iwakuma, this was a hell of a game for two guys the Mariners didn't seem to believe in early on.

It's a shame that Iwakuma's last two batters faced singled and homered, because even though the homer didn't really matter, it meant Iwakuma left with three runs allowed in seven innings instead of one. Still, there was no mistaking that Iwakuma was in control for most of the night, and though the broadcast continued to complain openly about his pace, that's a lot easier to tolerate when your team has a comfortable lead.

Iwakuma threw two-thirds of his pitches for strikes. He kept 13 of 21 balls in play on the ground. Earlier this season, even though Iwakuma had decent peripherals, there was the idea that he was too hittable, that he might be susceptible to an elevated home-run rate, or an elevated BABIP. Iwakuma's BABIP is .277. His home-run rate is high, too high, but that's the only thing keeping his numbers from looking rather quite good. If you sort all starting pitchers by groundball rate, Iwakuma shows up on the first page. Iwakuma made five relief appearances in the Mariners' first 54 games, and now there's reason to believe the Mariners might want to bring him back as a starter in 2013.

Which, obviously, isn't a decision that has to be made now, and it isn't a decision that can be made without Iwakuma's blessing. Maybe he wouldn't want to come back. Remember, 54 games, five appearances in relief. Rightly or wrongly, Iwakuma was treated like shit. But now he's pitching pretty well, and you might have noticed but the Angels don't have an easy lineup to shut down. There was no Mark Trumbo tonight, but that was still a good offense that Iwakuma kept from misbehaving. Of his 21 splitters, 18 were strikes. Maybe nine of them were in the zone, but the Angels had to swing. When that pitch is working, Iwakuma looks like a guy worth the contract that Iwakuma and his agent wanted the A's to hand over nearly two years ago.

In the top of the eighth inning, Miguel Olivo batted with a man on and the Mariners up by six. He blasted a cutter deep to straightaway center field, and Mike Trout appeared to settle under it on the track. Instead, Trout was just timing his leap, and he jumped in front of the wall to take away a home run. He threw to double off an astonished Eric Thames for good measure. Trout broke into an uncontrollable smile and Olivo jogged off the field wondering how he'd made God upset, as if God hasn't watched Miguel Olivo try to hit a breaking ball out of the zone way too many fucking times for even His patience. That was just another Mike Trout Moment in a game that Mike Trout couldn't win. There are a lot of these moments.

Wouldn't you know it but Trout came up in the bottom half. Vernon Wells had already homered to reduce the deficit to four. Then Stephen Pryor came on and struck out Chris Iannetta. Trout stepped into the box and the crowd came alive with chants of "M-V-P" which were perfectly justifiable. Angels fans had the guy they wanted at the plate. Mariners fans had perhaps the reliever they wanted on the mound. I like Tom Wilhelmsen more than Stephen Pryor, and I like the idea of Carter Capps, but in that situation I wanted to watch Pryor's pure, raw power. I wanted Stephen Pryor to try to overpower Mike Trout, and I wanted him to succeed.

The next pitch was a fastball at 98 that brushed Trout right back. It wasn't so close to his head that Trout was in danger, but it was close enough to his head to make Trout think he was in danger, and he ducked out of the way. The crowd issued its many complaints and Trout had to think about a pitcher capable of literally leaving him with baseball on the brain. It was the perfect brushback pitch, even if unintentional; it was hard and terrifying and message-sending, without running the risk of actual physical damage. I don't know if brushback pitches are ever truly intimidating, but if they are, then Pryor's was about as intimidating as it gets.

The next pitch was a fastball at 98 just off the outer edge. Trout swung right through it and the crowd fell deathly silent. Stephen Pryor overpowered Mike Trout, and though the win-expectancy impact was limited, psychologically the showdown couldn't have been more satisfying.

This Mike Trout thing is only getting started. I find it impossible to hate him. I find it impossible to even dislike him. I resent that he's an Angel when he could've been almost anything else, including a Mariner, but that's not Trout's fault, and watching him is a privilege, just as watching Vladimir Guerrero with the Angels was a privilege. Mike Trout transcends all the one-way pettiness and bitterness and serves to create experiences. Regardless of how things were going, it was always a treat to watch Felix pitch to Vlad Guerrero. It's always going to be a treat to watch the Mariners' better pitches pitch to Mike Trout. It'll be satisfying when Trout comes up just short of balls in play in the field, too, but those are less predictable. Trout's a superstar who has more visible fun playing the game than Brett Favre. He's younger than Mike Zunino. There are going to be a lot of showdowns, moments where Trout beats the Mariners, and where the Mariners beat Trout. Those showdowns are going to be more remarkable and more memorable than most.

Stephen Pryor brushed Mike Trout back, then he blew him away with an unhittable fastball. Stephen Pryor beat Mike Trout. Pitchers will beat Mike Trout more often than they don't, assuming Mike Trout remains somewhat conceivable. But I'm going to remember that at-bat fondly. So often we treat baseball as team vs. team. Team vs. team breaks down as a sequence of player vs. player, and those player vs. Trout match-ups are going to be something else, whether we like it or not. Here's to the next one. May it go a lot like this one.