Share All sharing options for: A John Jaso Discovery

As far as discoveries are concerned, last weekend Matthew and I were at Crater Lake, reading about the first (white) man to discover the area. On the summit of the South Sister, I couldn't stop thinking about the first man to discover that area. The age of terrestrial discovery has not come to an end, and perhaps it never will, but you can't just go out and discover things anymore like people used to be able to do. We're running lower and lower on the unexplored. One promising and uncharted area: the surface below John Jaso's beard. There could be anything. Unicorns. Great Auks. Rare and valuable minerals. There was a time that Jaso's beard appeared maintained and appropriate. There was a time that a forest was hardly a forest at all.

So I don't know where that paragraph came from and this post probably isn't going to be eye-opening. It'll make sense as soon as you think about it, but maybe you haven't thought about it, like I hadn't. Last night, John Jaso drew a walk. That's one of the things he does. Here's an image of it. 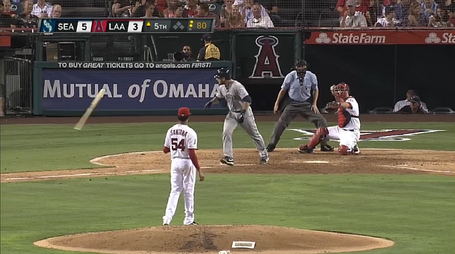 Ball four, bat-toss. John Jaso draws walks. One of the things we immediately loved about him was his sense of the strike zone. Among all regular or semi-regular Mariners, Jaso leads the way in walk rate, at 14.5 percent. No Mariner has walked more often than John Jaso has walked.

Last night, John Jaso hit a home run. It wasn't as well-struck as Dustin Ackley's home run, according to distance or batted-ball speed, but due to launch angle it was a clearer home run off the bat, and Torii Hunter stood still and watched it fly above him. John Jaso swung, and Hunter knew almost immediately that the ball would be going home with someone else. 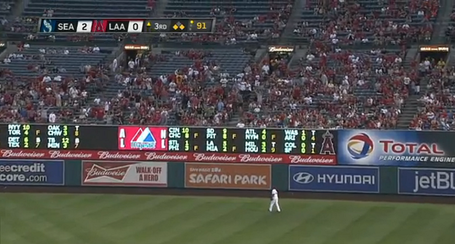 The home run was Jaso's sixth of the season. I didn't realize that's a career high - he hit five in 2010 and five in 2011, in a good deal more plate appearances. What we loved about Jaso was his discipline. We weren't looking for him to hit for power. Are you familiar with isolated slugging percentage? It's just slugging percentage minus batting average; it's basically extra bases per at-bat. Jaso presently owns a .187 ISO. Among all regular or semi-regular Mariners, Jaso has the highest ISO, by a fair margin over Casper Wells and Kyle Seager.

It's the middle of August, and while Jaso's sample size is limited, and while Jaso's effectively been platooned, he's statistically been the Mariners' best walker and the Mariners' best power hitter. It's the power that I consider to be a discovery. I knew that Jaso had hit well, but I didn't realize he'd been so potent, and I didn't realize everyone else has been so punchless.

In a season in which so many things have gone either wrong or at least not right, Jaso has blossomed. His power is up. He hasn't been bothered by Safeco. On the one hand, you should never want John Jaso to be your team's best statistical power hitter. On the other hand, look at the power for which Jaso has hit. Even if he can't hit lefties, most pitchers are righties, and Jaso has made non-outs 40 percent of the time he's come to the plate, with extra-base hits for good measure.

This past spring, Jaso received fewer at-bats than Vinnie Catricala and Luis Rodriguez. He finished with four hits. He was barely given any opportunity, and I heard he was considered unathletic. Between March and April in the regular season, he collected all of 20 plate appearances. John Jaso wasn't handed anything. Jaso earned his playing time. And he earned it by being better than any of us could've imagined.

If the Mariners want him, Jaso is theirs through 2015. He's been completely unaffected by whatever has bitten the rest of the position players. He can catch, not well, but well enough to catch. The Mariners acquired a guy coming off a .651 OPS and they've seen him launch forward. We've experienced enough of the opposite of that that I'm not going to feel bad about dwelling on this one win. What a win.