Chone Figgins Is Still On The Seattle Mariners

Share All sharing options for: Chone Figgins Is Still On The Seattle Mariners

It's interesting that a player so widely reviled remains on the roster so late in a season like this, and it's interesting how it really doesn't matter. Chone Figgins is out of Seattle-area fans, but he's practically invisible. He's a player people hate that they seldom have an opportunity to hate anymore. Chone Figgins is hardly even ever thought of. More than once I've had to be reminded that he's still there. I know I'm not the only one.

The abruptness with which Chone Figgins stopped playing is something to behold, now that it's behind us. Remember that we entered the season with hope. Or, we entered the season being told repeatedly there was reason for hope, that Figgins could re-discover what he lost by batting leadoff. Between the start of the season and May 3, Figgins played in 25 of 27 team games, starting 24 of them. In every start, he led off. Through those 27 team games, Figgins averaged exactly four plate appearances per, including the two games he missed.

Figgins was given a chance. He even hit a few balls hard and socked a couple dingers. There was a delightful time he had more dingers than Albert Pujols. The numbers didn't show up and Figgins was demoted from his role. The Mariners played team game number 28 on May 4. Since then, Figgins has started 16 times. He's averaged 0.8 plate appearances per team game played. He hasn't hit at all, obviously. For one thing, he's not a good hitter, and for another thing, it's hard to hit when you're strapped to the bench.

Figgins just started against the Yankees a few days ago, but he probably wouldn't have were Brendan Ryan not injured. He batted 14 times in July. He delivered a game-winning sac fly on June 30, which had completely slipped my mind, but Figgins very clearly serves no purpose. He is very clearly just a guy who's there.

We flash back to Eric Wedge on May 24:

As for Figgins, Wedge said releasing him hasn't even been considered by the team.
[...]
"So now, he's a utility player and a super utility player at that. He gives us protection. We'll play him when we need him. We'll use him how we see fit to help us win ballgames and go from there. You knew that that was the next option if it didn't work out. And that's where we are right now.''

The next option was for Figgins to be a super-utility player, helping out where he could, and that didn't stick, mostly because Chone Figgins can't really help. The option after that was apparently not to release Figgins. It was to keep Figgins trapped on the team like a prisoner.

I don't even care. I'm not mad. It doesn't make a difference, because Figgins' roster spot is irrelevant. It's not like there's some younger player I want to see with that job since there's not really anywhere for him to play. I suppose the Mariners could elect to reward Luis Rodriguez for a job well done in triple-A. I'm sure he'd be thankful for the spot and the salary bump. I just...I mean, whatever. I thought I'd hate that Chone Figgins is still on the Mariners. It stirs nothing within me. He's there. It's weird. It's probably weirdest for him.

One senses that Eric Wedge isn't the reason Figgins is still around, and one senses Jack Zduriencik isn't the reason, either, although he could be. The value in dropping Figgins at this point would be purely symbolic but the value in keeping him is nil. Maybe very slightly negative, depending on how you feel about his abilities. To Figgins' credit, I haven't heard anything about him being a distraction, and the pictures of his teammates mobbing him on June 30 are heartwarming in a way. I don't think the team hates Chone Figgins. I think Chone Figgins is just dealing with his reality, even if he'd prefer that it change, and his teammates assume he's there if he's needed. Which he is, for whatever that's worth.

I told you this was going nowhere. It looks like Chone Figgins is going to ride out the season with the Mariners. This is the third season of a four-year contract, and next year he'll get paid $8 million. Odds are he won't hit that $9 million vesting option for 2014. I'm going to go ahead and assume that Figgins will disappear this fall or winter, when the roster is restructured. Right now, though? He's still got a uniform, and he still puts it on. He still sits in the dugout with everyone else, and he still warms up before the game with better players. Chone Figgins is in the weirdest career limbo, and I think he's a guy I simultaneously dislike and feel a little sorry for. I didn't know that was possible, but I didn't know a lot of things were possible, before Chone Figgins. 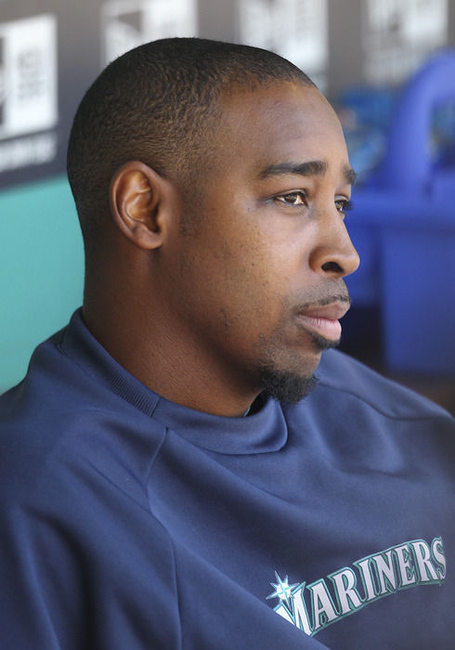