Share All sharing options for: The Mariners' Bullpen Going Forward

I was rummaging around the internet on a coffee break and peeking out behind a dusty old box was a little scrap of paper. It just read "bullpen?" At least that's what I think it read, the digital ink was faded from so much internet dust and time. But it got me thinking, and then I went and got a starburst candy* and forgot what I was thinking about, and then I came back and coincidentally looked at the Mariners' team page on StatCorner.

It was then that a fun fact idea sprang to electrical life in the recesses of one of my brain lobes or cortexes or something. I'm not a doctor. What I noticed was that, judging by tRA, the Mariners had five relievers below average and seven above average. That's not too surprising, especially since the unit's overall mark is currently a smidgen above average. However, building on Jeff's point about the exciting bullpen, I made note of the identities of the five below average relievers. 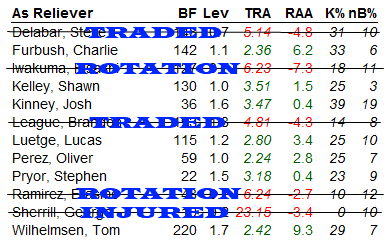 Of the people left, Stephen Pryor's ludicrously small sample provides the lowest strikeout rate, at 23%. The American League average strikeout rate this season for relievers is 22%.