Share All sharing options for: The Eric Thames Idea

Know first
The Blue Jays dealt Eric Thames in exchange for a decent reliever in Steve Delabar. That should tell you something about how Thames was valued by the Blue Jays.

Know second
That doesn't say everything about Thames, because of course, from the John Jaso example, we know that sometimes teams trade good players for decent or potentially decent relievers. Maybe not on purpose but whose player evaluation skills are perfect? That the Blue Jays gave up Thames for Delabar is not the end of the story.

Thames has posted a .652 OPS this season. In the majors, that is, over a limited sample, while he tore up Las Vegas, which is constantly being torn up by every hitter that puts on the uniform. Thames' value is down. Last season he posted a .769 OPS in the majors, which was above-average, and Thames was 24. He had also torn up Las Vegas. In 2010, he hit well with double-A New Hampshire. Thames' value has been higher, recently.

The whole idea behind the Eric Thames acquisition, I think, is this:

Thames hit that home run last September against Dan Haren. It was an absolute no-doubter home run immediately off the bat, and according to the Home Run Tracker, it left the bat at 115.8 miles per hour. No Mariner has hit a faster home run this season. Last season, only Wily Mo Pena hit a faster home run as a Mariner. The season before, no Mariner hit a faster home run. That's Eric Thames' power potential. He's strong and he has a quick bat and he's proven that a home run like the above can happen for him in a major-league game. Dan Haren shouldn't have thrown him this pitch: 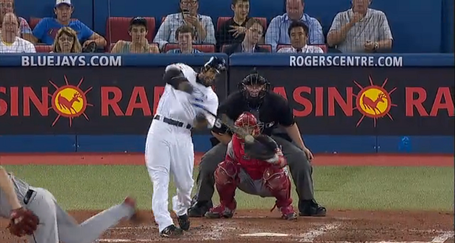 You want more? Here, have another:

Of course, I could make Carlos Peguero look good by selectively embedding a few of his major-league highlights. Peguero has hit some impressive dingers, and if I only showed you those, you'd think he's a potential MVP. We know that, in truth, Carlos Peguero is practically helpless against anyone in the major leagues not named James Shields. But Thames doesn't have Peguero's approach, or anything even close to Peguero's approach. He is aggressive, and he doesn't have Jack Cust's control of the strike zone, but his contact rate isn't dreadfully low, and his rate of swings at balls isn't dreadfully high. Thames has a competent approach, even though it could stand to be more refined.

You know what Eric Thames did in 2011 as a nearly-25-year-old? Essentially what Mike Carp did in 2011 as a newly-25-year-old. You can find differences if you stare long enough, like how Carp struck out more often while hitting for a higher BABIP, but there are a lot of similarities. Carp and Thames bat left-handed, and they showed lightning-quick bats with considerable pull power. There were holes in their swings, and they left something to be desired in terms of their outfield defense. But power makes up for a lot of deficiencies, and the Mariners figured it was worth seeing if Carp could build on what he did. Now they'll see if Thames can build on what he did, even though he struggled with the Blue Jays earlier this very season.

I think that's the right way to think about this. Right now, the Mariners are trying out Mike Carp at first base. They'll also be trying out a newer Mike Carp around the outfield. And maybe Thames will also pick up some at-bats at DH, I don't know. It's not a guarantee that Thames will pan out, just as it's not a guarantee that Carp will pan out, but the potential is apparent and there's no one better who's more deserving of the playing time. One Mike Carp has certain odds. Accumulate a few of them and odds are better that one can stick.