The Return Of Carlos Peguero

Share All sharing options for: The Return Of Carlos Peguero

But baseball is also a game of subtleties. The differences between the best and the worst players tend to be subtle. A player who is drafted highly is sent to the minors for development instead of the majors, but by the time that player makes it to the majors, the adjustments he will have made will be subtle. The difference between a fastball and a slider is subtle. The difference between a fastball and a curveball is subtle, in a way. The knuckleball is a different beast, but then throwing a good knuckleball is just a little difference in finger position and finger pressure.

A good pitch versus a bad pitch? Subtle difference. A good stop versus a futile dive? Subtle difference. So much of baseball is subtle things, allowing for bigger, more visible things. Especially with player development and polishing. Seldom does a more polished player look markedly different from the more raw version before.

It took one plate appearance and one play in the field for us to recognize that any adjustments Carlos Peguero made in Tacoma were subtle ones. 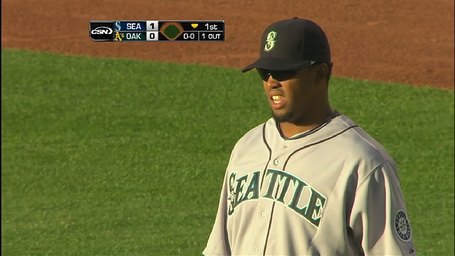 I'll see you on the other end of the weekend. I bet Peguero will have a dinger by then. I bet it'll be massive.