Carter Capps Now Half As Many Levels Away As Before

Share All sharing options for: Carter Capps Now Half As Many Levels Away As Before

Carter Capps is a guy the Mariners drafted in the third round a little over a year ago. He was drafted out of Mount Olive College in North Carolina, which has produced such legendary major leaguers as Steve Mintz and that's it. Mount Olive is a small school that's just about off of the professional-baseball radar, but Capps got the Mariners' attention, and his appeal was such that he was selected very early. He finished the summer by making four appearances for single-A Clinton. In theory, he could start, but the Mariners were going to have him relieve.

He's been relieving with double-A Jackson, and it hasn't been fair. Over 50 innings, Capps has registered 12 walks and 72 strikeouts. This for a 21-year-old who began the season with four games of professional experience, against low-level competition. Capps allowed five runs in April. He's allowed three runs since. Over his last 15 appearances, he's racked up two walks and 22 strikeouts. He's thrown seven of ten pitches for strikes. He's made two of five swings whiff.

Now Capps has been promoted, to Tacoma. This has been a long time coming, as Capps was earlier Jackson's co-closer, along with Stephen Pryor. Based on the Pryor example, Capps could end up in the majors in a short amount of time, given a good enough performance. Capps isn't currently on the Mariners' 40-man roster, but Pryor wasn't, either, until he was brought up and George Sherrill was bumped. Space can be made, is what I'm saying. Remember how the trade deadline is almost here? Remember how there's still Yoervis Medina?

What people love the most about Capps is his 97-100 mile-per-hour fastball, which is understandable, because that's a very good fastball. Kind of like how Stephen Pryor has a very good fastball! Capps also has a breaking ball and a changeup, and while they aren't as good as his heater, honestly that's not a very fair standard. It will be interesting to see how triple-A competition does against Capps, since in theory those hitters should be less easily overpowered than double-A hitters, but sometimes a guy's fastball is just too good. Capps' fastball might be too good, or it might not be, I don't know. He could probably stand to improve his other pitches. He probably doesn't need to improve them to be a capable big leaguer.

An interesting thing about Capps is that, while he stands 6'5, officially, he has a relatively low release point. He's not exactly a tall-and-fall sort of pitcher, and his arm angle is down. From spring training, look at Capps' release point, versus Pryor's: 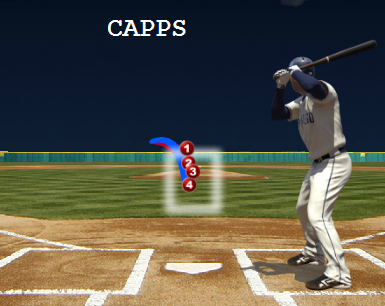 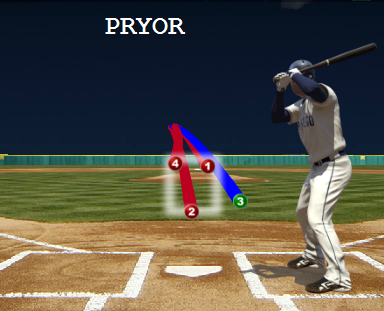 But where you'd think that might leave Capps vulnerable to lefties, double-A lefties posted three walks and 36 strikeouts. If Capps is to have trouble with lefties, we're waiting on signs. Of course, his track record is limited, and he's only now getting into the PCL. The competition's getting better, so the numbers will have more meaning.

Carter Capps is coming. He isn't in Seattle yet, but he's the closest he's ever been, and if he does in triple-A anything similar to what he did in double-A, the Mariners won't hesitate. They drafted him high for a reason, and they've promoted him aggressively for a reason. It's a funny thing how relief prospects seem so much more reliable than starting prospects. In the majors, you trust a starter a hell of a lot more than you trust a reliever. But relief prospects can rise quickly on stuff alone, and Capps' stuff is as good as most any other reliever's in the minors. It doesn't look like Capps is going to go the way of Josh Fields, although he could. You never know!

Capps pitched one inning of spring training with the Mariners. He struck out Everth Cabrera swinging on a changeup, some guy with a generic name I've never heard of flew out, and Capps struck out Will Venable swinging on a 98 mile-per-hour high fastball. Based on that one inning in March, why hasn't Capps been with the Mariners all season long? Jesus! This team, sometimes.