On Tuesday, full day one after Ichiro, game two after Ichiro, Felix Hernandez and the Mariners beat Ichiro and the Yankees. That, by itself, wasn't really anything new, except for the Ichiro part, which could hardly have been newer. Felix had beat the Yankees six times before. With a handful of strong outings, he even developed the reputation of being a big-game pitcher. People started to expect Felix to up his game against the Yankees, even if that was trying to apply a narrative to something that doesn't follow a narrative.

But there was something different about this game, compared to all of Felix's previous games. Felix had started a dozen times against the Yankees, throwing 86 innings and facing 360 batters. Of those 360 batters, 120 had reached by hit or walk. Exactly zero of them had reached after being hit by a pitch. Over his career, Felix has hit 12 Rangers. He's hit eight A's. He's hit six Tigers, four Angels, and four Indians. Before tonight, he'd never hit a Yankee. Not even once. Not even one of the fat ones.

After tonight, he's hit three Yankees. And what a group of three Yankees to hit. In the top of the seventh, Felix hit Ichiro in the foot with a breaking ball. It was the first time Ichiro's been hit in over two calendar years. In the top of the eighth, Felix hit Derek Jeter in the elbow with a fastball. And two batters later in the top of the eighth, Felix hit Alex Rodriguez in the hand with a changeup. In the span of five batters, Felix drilled three probable future Hall-of-Famers. The first two lived to tell the tale, but Rodriguez was hurt, and word's out now that he suffered a fracture. He's going to be out of action for several weeks, and while the Yankees should get by without him, they'll hardly be better for it.

There's nothing to be said about intent. Of course none of the hit batters were intentional. Felix has never been that kind of guy, and it wouldn't have made sense to put runners on base in those situations. Above all else, Felix is a competitor, and he wants to win. He has no beef with the Yankees; he just wants to beat the Yankees. Unfortunately his location was off all evening long. Three Yankees batters were hit by pitches that didn't go where they were supposed to go. Several more Yankees batters watched pitches go other than where they were supposed to go.

I also don't really feel like highlighting the Rodriguez hit-by-pitch in particular. That would just lead to an ugly conversation, and while there are most certainly plenty among you who are happy to see Rodriguez get hit and hurt, better to just keep those remarks to yourselves. I'm not going to assert that the incident is totally devoid of humor. I'm also aware that sometimes we think unpleasant things that shouldn't be shared.

This was a game-changer. In the world of Felix Hernandez trade rumors and Felix Hernandez would-be trade rumors, this just changed the equation. Up until now, Yankees fans wanted Felix the most, or at least Yankees fans wanted Felix the loudest. They all recognized his ability, and they all recognized that he was pitching for a pretty lousy team. They didn't understand why Felix wouldn't be made available. They didn't understand why it didn't make all the sense in the world for Felix to get shipped to the Yankees. Yankees fans have badly wanted Felix since Felix became Felix. No sooner did Felix figure things out than the people in New York assumed the Mariners had served their purpose and asked for Felix to be freed.

It's all silliness, naturally, because Felix didn't mean to do those things and so to be mad at him is to be mad about an accident, but few things whip fans into a frenzy quite like seeing a few of their batters get hit, and now he's more of an enemy than an opponent. To some. It's important to recognize that not everybody feels the same way, and some people are going to be more emotional than others. Some Yankees fans are going to be mad at Felix, and some Yankees fans aren't going to feel any differently about Felix. But what matters is the sum, or, if you prefer, the average. After tonight, there will be fewer Yankees fans that want Felix Hernandez than there were yesterday, or last month. That's a good thing, for us. That's a less insufferable thing, for us. Maybe next time Felix should just throw a ball at Jeter's helmet. That'll drive away every Yankees fan completely. We're all tired of hearing about how Felix should be playing in New York, and now Felix has taken steps toward addressing that.

The last time Felix took the mound, in Kansas City, it was a thousand degrees and Felix worked quickly without generating many strikeouts. Felix acknowledged afterward that he was just trying to get himself and his teammates off the field and out of the sun, and Ned Yost told the media that Felix might've had the best command of any pitcher the Royals have faced this season. It was a strong start for Felix, if an unusual one. Tonight, Felix wasn't the same pitcher. Tonight, Felix barely had any command at all. It was better in the middle, but it was rough at the beginning and it was rough at the end, and it's hard to believe a wild Felix limited the Yankees to two runs. One of which scored after things were turned over to the bullpen.

Felix's strike rate wasn't a disaster, and he did technically finish with more strikeouts than walks. But hit-by-pitches function just like walks, and if you put them together, he had six of those, and four punchouts. Felix didn't know where those pitches were going, for the most part, and it's to his credit that the Yankees couldn't do more damage. That's the quality of stuff that Felix throws. But it's not like it's all to his credit, since he wasn't locating, and things could've been different when Eric Chavez lined out to center in the fourth with the bases loaded. The broadcast praised Felix for working out of trouble, but what he'd done was allow a 2-and-2 fastball at the belt to get driven hard up the middle. In that at-bat, Felix escaped. There wasn't the same sensation of escape in many of his other at-bats.

It's refreshing to know that the Mariners won a Felix Hernandez start against a good team in which Felix didn't have to be perfect. My preference is to watch Felix win when he dominates, because being able to see Felix pitch at the top of his game is the best part of being a Mariners fan, but it's always good to know that a game like this is possible. It's good for us, and it's probably good for Felix, too, because while he says he loves the challenge of having to pitch almost flawlessly, sometimes a brother needs a pick-me-up. The Mariners came through for a Felix that wasn't Felix, and that hasn't often been the case in the past.

Honestly, the most impressive player in this game was Michael Saunders. In the bottom of the first, he drove an elevated 1-and-0 Freddy Garcia fastball into the right-center seats. In the top of the second, he robbed Mark Teixeira of extra bases with an outstanding running and leaping catch against the wall. In the bottom of the third, he got ahead of Garcia and pulled a critical single. Later, in the bottom of the eighth, he drilled a fastball from a lefty specialist, but he was robbed by a diving Robinson Cano. Michael Saunders couldn't sustain his early pace, but he was a major contributor, at the plate and in the field, just like he's supposed to be. Just like he was always supposed to be.

As Saunders was going up to make his catch against Teixeira, slow-motion replays showed a very mysterious pair of falling sunglasses: 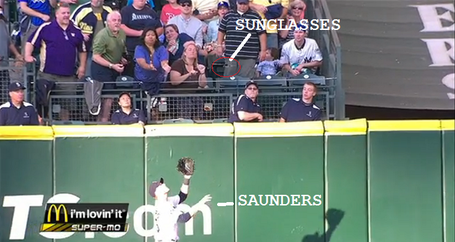 I'm not sure where they came from, but they were falling from above in Saunders' direct vicinity, and my best guess is that God was trying to tell people to Deal With It. That Michael Saunders is somebody they'll have to Deal With, on account of Michael Saunders is boss. I'm not sure why God wound up missing Saunders with the sunglasses and bouncing them off of that one dude's back, but if God were really that careful about what He does there wouldn't be Jeff Karstens' face. "Ehhh, close enough," God probably says a lot.

Given the way that Freddy Garcia settled down, or the way that the Mariners' hitters stopped hitting, I kind of forgot that the Mariners were winning this game for several innings. A Jesus Montero bloop single and a John Jaso sac fly put the Mariners in front in the third and then there was a whole lot of nothing. It didn't feel like a game in which the Mariners should've been beating the Yankees. But they were, and maybe the greatest act of lead preservation came from Lucas Luetge in the top of the eighth, when he struck out Raul Ibanez in a full count with two on and two down. Luetge put a 3-and-2 slider right on the outer edge and Ibanez whiffed with that swing that always looks so awkward until you realize it's his productive swing too.

After that strikeout, the Mariners were still ahead 3-2. The bottom half of the inning took something like 79 minutes and saw the Mariners increase their lead to 4-2. Joe Girardi used five different pitchers in the bottom of the eighth, and it's important that the Yankees wound up losing this game, because this way Girardi didn't get any positive reinforcement. This kind of time-wasting and attention-sapping bullshit can't be eliminated from baseball soon enough, and I'm glad for this reason and others that the Mariners didn't collapse.

The ninth went to Tom Wilhelmsen, and Tom Wilhelmsen was amazing. He struck out Eric Chavez with a 91-mile-per-hour changeup in the dirt. That's a pitch that Wilhelmsen throws now. Ichiro grounded out on a 97-mile-per-hour fastball. Russell Martin pinch-hit and saw five curveballs out of six pitches. He swung at none of them and the last one froze him to end the game. Martin couldn't stop bailing out each time Wilhelmsen threw the curve for a strike. He was left effectively helpless. I think Martin might've disagreed with the final called strike, but it was a legitimate strike without question.

Perhaps the oddest thing was how normal this game felt. The Mariners were playing without Ichiro and against Ichiro for just the second time, but at least for me, it felt far more normal than yesterday did. Yesterday I nearly came to tears in my apartment. Today Ichiro was a guy on the other team. A special guy, of course, but this game wasn't about reflecting on all the time spent with Ichiro. It was about the Mariners trying to beat the Yankees, and about Felix trying to send all of the Yankees to the hospital.