It's interesting - the Mariners didn't really hit at all in this series. They scored a total of seven runs over 32 innings, or 2.0 per nine. They also won this series, and so Eric Wedge came away pleased with the team's road trip. It isn't difficult to imagine things going slightly differently and the Mariners getting swept this weekend, since they scored just those seven runs. One big hit Saturday, one big hit Sunday, and the Rays take all three, and Wedge is decidedly less positive. It hints at the fragility of positive and negative thoughts. When you're positive, things generally aren't really as good as they seem. When you're negative, things generally aren't really as bad as they seem. Except for Justin Smoak. He is as bad as he seems, and he's in desperate need of help.

As it stands, I actually missed this entire game, and while I've caught myself up with highlights and reading the game log, there's not a lot I can tell you that you couldn't figure out yourself. I did stumble across one interesting quote from Matt Joyce in the Mariners.com recap.

"That goes without even saying," Rays right fielder Matt Joyce said. "To lose two to Seattle ... nothing to take away from Seattle, but they don't have the best of records. Usually if you have a better team, then you've got to take advantage of those opportunities."

Usually players aren't quite that honest with the media. The average player would've just said that you have to give credit to the Mariners, or that the Mariners are a hungry young team with something to prove, or whatever. Most players wouldn't flat-out say "we're better than that other team." But Matt Joyce lamented a missed opportunity to gain important ground.

It's interesting because of Joyce's honesty, and it's interesting because of the numbers. The Rays are 7.5 games better than the Mariners in the standings, and their run differential is better by 15. Since Evan Longoria got hurt at the end of April, though, the Rays have gone 34-39 with a run differential of -6. The pitching's been fine, but they've struggled to score. In the numbers, there's not a lot separating the Longoria-less Rays from the Mariners, and they've been without Longoria for a long time. This perhaps wasn't the glorious opportunity Matt Joyce thought that it was. Although the Rays did miss Felix Hernandez, so they had that going for them.

The hero of this game was Blake Beavan, and where ordinarily it's draining to think of a way to spin a Blake Beavan start as having been interesting, today Beavan's performance was fantastic, or at least my statistical interpretation of his performance suggests that it was fantastic. Usually after Beavan's better starts, we have to consider how much credit to give him for inducing weaker contact. Today Beavan was a hit in all the right categories. Today Beavan might as well have channeled his inner Cliff Lee. There are better comparisons but I like remembering that Cliff Lee once wore a Mariners uniform. For other baseball fans, that chapter is long forgotten.

What analysts like from pitchers are strikes, missed bats, and groundballs. You know that; it's basically the foundation of FIP. Or more precisely, xFIP, where FIP uses home runs instead. Beavan's never had a problem with throwing strikes. He has had a problem missing bats and keeping the ball on the ground, leaving him as something like the equivalent of a Minnesota Twins sixth starter. Beavan's results today were unlike his usual results.

Of his 101 pitches over eight outstanding innings, 70 were strikes. That's not the uncharacteristic part, although the "outstanding" is. The Rays swung and missed 11 times. For Beavan, that's a new career high. And of the 23 balls the Rays put in play, 13 were grounders and three counted as pop-ups. Carlos Pena nearly left the yard in the bottom of the first, but he didn't, and so Beavan doesn't get docked. Beavan wound up with zero walks and five strikeouts, and this was just the second time he's ever had more than four strikeouts.

What would it look like if Beavan actually took a legitimate step forward? I'm not sure, but presumably it would involve more missed bats or more grounders. Possibly more strikes. We'd see improvement in his secondary stuff, but then that would lead to statistical changes, even if just subtle ones. By and large when Beavan has succeeded in the past, he's done so while being Blake Beavan, so we never had reason to consider he might be something more. He still probably isn't something more, but for one start we can think "hey maybe he's stopped being himself." With Beavan's control, he has the foundation; it wouldn't be outlandish for him to get better. We'll see. He's probably not better. We'll see. This was a notable game for a pitcher like him.

In relief of Beavan, Tom Wilhelmsen pitched for the third day in a row. A strikeout and a grounder got him most of the way to a save, but then he allowed a double and a walk. That brought up Brooks Conrad, who yielded to Hideki Matsui as a pinch-hitter, and right after the previous batter drew a walk, Matsui swung at this first pitch: 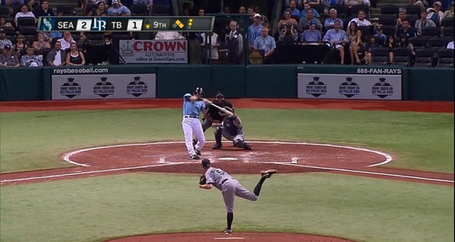 It was a fastball, high and out of the zone, and Matsui wound up with the result you'd predict based on that screenshot. His OPS is down to .435. He's batted 103 times. He seems to be following the Ken Griffey Jr. career-end trajectory, meaning he should be five more plate appearances away from calling it quits and driving to the other side of the continent.

In his inning, Wilhelmsen threw 11 fastballs, six curves, and three changeups. Between April and June, 2.6 percent of Wilhelmsen's pitches were changeups. He threw changeups so infrequently that whenever he tried one, it was a thing that you noticed. So far in July, Wilhelmsen has thrown 6.9 percent changeups. That makes it sound more significant than it probably is. That's actually just nine changeups out of 130 pitches. But Wilhelmsen might be deliberately phasing the changeup into his game. Something to use to give hitters another look so they don't just sit on his hammer.

As Wilhelmsen has a good fastball, an unbelievable curve, and an occasionally useful changeup, I imagine there'll be calls for him to start. He was a starter as recently as last season in the minors. People on the Internet always want good relievers to be turned into starters, so long as they have the pitches, because people on the Internet know that a good starter is more valuable than a good reliever. Maybe Wilhelmsen should be starting, just like maybe Charlie Furbush should be starting, but I couldn't tell you. Wilhelmsen's most recent starting experience was unsuccessful. And these things just aren't easy. Chris Sale is flourishing this season as a starting convert. Neftali Feliz was doing all right before he got injured. Daniel Bard was and remains a disaster. There's no guarantee that Wilhelmsen would succeed. There's no guarantee that Wilhelmsen would stay healthy.

And there's no indication that the Mariners are thinking about converting Wilhelmsen back anyhow. Hell, they could trade him away this week! This is just an area where we can't know unless something is done. If Wilhelmsen were given another shot at starting, we'd probably get an answer. As long as Wilhelmsen is relieving and closing, conversations about him as a starter would be littered with guesses and devoid of certainties. Fans love those theoretical arguments, but there just wouldn't be an answer.

Right now, Tom Wilhelmsen is an awesome closer, in a way that Brandon League never was. League is handy evidence that closers can't really be trusted over a long period of time, but Wilhelmsen is doing better than League did so Wilhelmsen would have farther to fall to struggle. He could get hurt, but those years away from baseball were presumably quite good for his joints. He doesn't have the wear and tear of your average 28-year-old big leaguer. Cole Hamels was born a week and a half after Wilhelmsen. Hamels has thrown 1577.2 innings as a professional. Wilhelmsen has thrown 320.2. That matters, although that isn't all that matters.

Enough of all that. Jesus Montero doubled in a run, Brendan Ryan doubled in a run, Blake Beavan was astonishingly excellent, and the Mariners took two out of three from a slightly better team that's a considerably better team when it's healthy. Now the Mariners will play ten consecutive games at home so either the odd 2012 Safeco effect will persist, or we'll see more than ten total combined runs over the homestand. The Mariners are like a bird you feel bad about keeping in captivity and set free. "No, stop coming back, it's better for you to be somewhere else." But the bird keeps coming back because it's the only home the bird knows.