Carlos Peguero Knows One Way To Be

Share All sharing options for: Carlos Peguero Knows One Way To Be

The 2012 Seattle Mariners have played 95 games. They rank third-lowest in the American League in home runs, with 83. That seems bad, and indeed it is more bad than good, but for the sake of perspective, through 95 games a year ago, they had 55 home runs. Through 95 games the year before that, they had 60 home runs. The offense and the power haven't been good, but they've been better.

Anyhow, the longest of those 83 home runs to date was hit Friday night. Carlos Peguero went yard off James Shields in the top of the seventh, and initial estimates said one thing. The ESPN Home Run Tracker says 453 feet. Stripping away environmental conditions, Peguero's homer had a standard distance of 453 feet. They played in a room-temperature dome.

On April 27, Michael Saunders hit a 452-foot bomb. On June 3, Miguel Olivo hit a 450-foot bomb. Peguero's got them beat, and Peguero also has a new career-long, not that he's had much of a career so far.

I remember hearing about how the Mariners were looking for Peguero to cut down on his swing. He was striking out too much, and the idea was that he has so much power that he doesn't need to swing with full force to drive the ball out of the yard. That's true, but when a guy like Peguero swings like Peguero for his entire life, it's difficult to make that adjustment. Peguero might still manage, but for now he's very much Carlos Peguero as we've known him, for all of the glory and all of the failure. 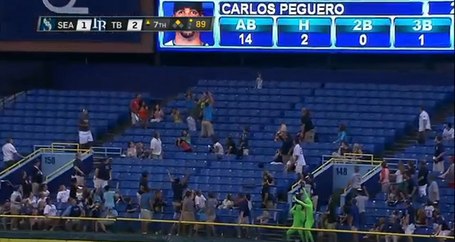 The comparison's been made many times over, but Peguero and Wily Mo Pena really do have a lot in common. Pena managed a career 93 OPS+ in the majors, while Peguero's down at 78, but the feeling is similar when they step into the box, and when they hit the ball right, the only question is whether the ball will remain intact long enough to clear the field in one piece. It's only a matter of time before Peguero swings and the outfield is littered with leather confetti.

Speaking of Pena, guess who participated in and apparently won the Japanese Home Run Derby? Guess who he competed against?