The Mariners arrived in Tampa Bay having won three of four against the Royals, and having scored 31 runs in the series. Eric Wedge said after one of the games that that's how he wants to see this team play on a consistent basis. Makes sense, because the Mariners won and scored a lot. At the same time, the best starting pitcher the Mariners faced in the series was Bruce Chen, and the second-best starting pitcher they faced in the series was oh my god, oh my god, please don't make me try to answer this question, it's impossible, they're all bad, they're all so bad. Scoring matters, but it matters less against inferior competition, and so this weekend series looked like it would make for a challenge. The Royals can't pitch at all. The Rays sure can! Let's see about those Road Mariners against an actual pitching staff of competent humans.

Then it became evident very quickly that actually no, just kidding, the Mariners were going to be like the Mariners. They scored in the first, and then nothing, forever. Following Wells' RBI double, John Jaso was hit by a pitch, and two batters later Kyle Seager walked. That was with two outs in the first. The next Mariner to reach base was Dustin Ackley with two outs in the fifth, and he reached on an error. The next batter to reach after that was Seager with a single to lead off the seventh. James Shields walked two and struck out ten.

In between the Mariners' fits of offense, Hisashi Iwakuma pitched and he pitched probably better than he has all season long. Anybody who watched this game all the way through probably completely forgot that Iwakuma pitched or that he's even on the team, but he made it through six innings with a walk and seven whiffs. He gave away a lead in the bottom of the sixth, but the lead was just 1-0 and frankly sometimes a 1-0 lead deserves to be given away. If you're not going to support your pitcher maybe you just don't deserve to win. Iwakuma was mixing up everything and generating swings and misses, and then he left a fastball up to B.J. Upton that generated a swing and long hit. The Rays' go-ahead run scored on a weak grounder placed perfectly on the left side. It deflected off of Seager's glove, and there's an argument to be made that Seager should've let it go so Brendan Ryan could give it a shot, but it's probably not automatic yet for Seager to assume he's playing beside an ADD sorcerer. 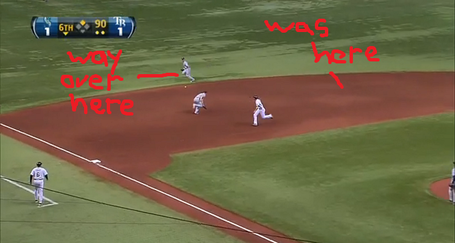 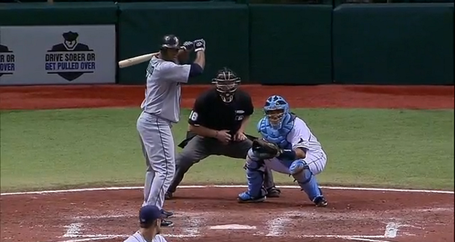 It wasn't a bad idea, especially given Molina's ability to frame pitches just off the plate. Molina was working his pitch-framing magic all game long, at least while he was still in there, and Shields had been hitting his spots. But it's tricky to try to throw an outside slider to an opposite-handed hitter because if you miss in, and you don't bury it, it becomes a very hittable pitch. Shields basically couldn't have missed any worse than he did. 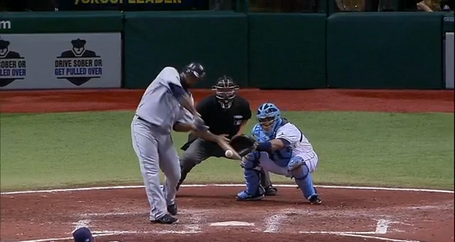 The camera angle is dead-on. That slider missed over the very center of the plate, above Peguero's knees. This was a 1-and-2 pitch from a very talented starting pitcher to Carlos Peguero. Hector Noesi makes too many two-strike mistakes, but he doesn't make all of the two-strike mistakes, and even Peguero can make contact with this pitch at least some of the time. With one mistake, the Rays found themselves behind once again.

Maybe you're not understanding just how bad of a pitch this was. Seriously you guys: 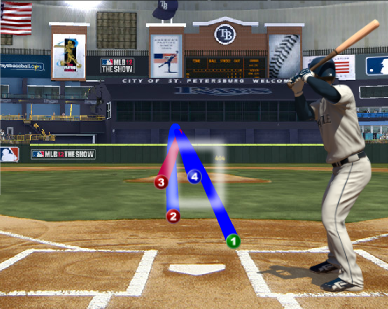 It was laugh-out-loud bad. Peguero took Shields deep on a slider. Last year, Peguero blasted a Shields changeup, and a Shields curveball. You'd think that Shields would be a horrible matchup for Peguero, since he throws quality off-speed stuff and has the ability to work around and off the edges. I still think that Shields is a horrible matchup for Peguero. But in five plate appearances, Shields hasn't struck out Peguero once, and he's served up three dingers.

Sometimes I really do love the Carlos Peguero experience. As a major leaguer he's hit a home run in four percent of his plate appearances. That is hardly an extraordinary rate, and if somebody told you that something has a four percent chance of happening, you would assume that it wouldn't happen. But he's so comically strong that the chance of a home run is just always there. It's buried way below the chance of a strikeout or some other kind of harmless out, but Peguero feels like a home-run threat in the way that Justin Smoak just never will. You can never dismiss the chance of a Carlos Peguero home run, against anyone. The overwhelming majority of his plate appearances end with frustration, but every last one of them begins with a glimmer of hope.

Anyway the Mariners had the lead and then a few minutes later they didn't because of a double and an infield single that not even Brendan Ryan could turn into an out. B.J. Upton drove home Desmond Jennings with two out in the bottom of the seventh. And that was right about when things stopped happening.

This was an aggravating game. It went on for nearly five hours, and this was the sort of game that made me feel like a lousy baseball fan. All I wanted was for it to end. I didn't care about the Mariners getting a win. I just wanted to be able to stop watching baseball, and I knew I wouldn't be able to stop until the final play was over. I'm sure there were Mariners fans out there, maybe very young Mariners fans, who were following along on the edge of their seats. I'm sure there were Mariners fans out there for whom this felt like NHL playoff overtime. But right now I'm in this for entertainment and young player development. Very little about the extra innings was entertaining, and Dustin Ackley, Justin Smoak, and Jesus Montero finished a combined 0-for-17 with seven strikeouts. I wanted off of the ride.

Only toward the end did my mental state start to shift. With most extra-inning games, what you want during the first few extra innings is for the game to reach a conclusion. Hopefully a positive conclusion, but some sort of conclusion. If no conclusion has been reached by the time the game gets deep, then you reverse and hope the game never ends. You want baseball to get weird. You want unusual defensive alignments. You want emptied benches. You want position players pitching. Or, alternatively, unscheduled starters pitching. You root for absurdity, because by the time you get that deep into any one baseball game your brain has checked out and gone for a walk. Silliness takes hold and you start to understand the appeal of the Three Stooges. You start to wonder why you never understood the appeal before.

The Mariners had a chance to score in the top of the 14th. Whatever, they didn't. In the bottom half, in his second inning of work, Tom Wilhelmsen struck out B.J. Upton. Wilhelmsen looked good, but he was the last guy, with Shawn Kelley under the weather, and the broadcast informed us that Miguel Olivo was getting loose in the bullpen. Prior to that, those of us who were watching were watching without knowing why. We just wanted to not be watching anymore. Miguel Olivo gave us a reason. I think I speak for all of us when I say that, as soon as we heard that Olivo was warming up, that was the one thing we wanted. Even if Olivo came in and allowed a first-pitch walk-off home run, at least we would've seen Miguel Olivo on the other end of the battery. That would've made it all worthwhile.

Olivo warmed up until the Rays walked off. Carlos Pena dropped a single in front of Ichiro. Ben Zobrist pulled a grounder down the line that Justin Smoak might've been able to knock down. Ichiro made a poor throw home with Pena rounding third, and nobody bothered to cut it off for a relay. Just when we finally had a reason to give a shit about the game continuing, the game ended, in a most frustrating way. We didn't get to forget about everything and focus on Miguel Olivo's fastball. We were instead reminded that Justin Smoak is a mess, and that the Mariners are kind of a mess.