Wait, stop, no, hold on! Give this post a chance! I realize that Jason Vargas occupies an unfortunate position. He is not amazingly awesome, like Felix Hernandez. He is not pretty much literally the worst, like Anthony Vasquez. He is not average or mediocre in an interesting way, like Brandon League or Hector Noesi. He's Jason Vargas, and sometimes he's more Jason Vargas than other times. People don't talk a lot about Jason Vargas, and when they do, they don't talk about him for long. But if we're only going to care about and write about the most interesting Mariners, then I've got bad news. Why limit ourselves? Why not write about what's...less interesting...so that...well I've talked myself out of this post before even truly getting started. But I'm still going to write it because it's not going to be very long. This is analysis!

Don't ask me why, but earlier I was scrolling through Jason Vargas' Brooks Baseball player card. I wasn't looking for anything specific; as a matter of fact I don't remember why I was there in the first place. So seriously, don't ask me what I was doing. But toward the bottom of the page, something caught my eye that will now catch your eye: 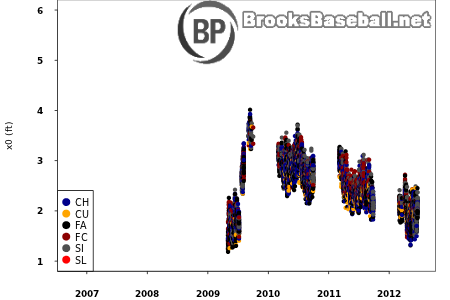 This isn't due to a change in arm angle. Vargas isn't throwing more over the top now. Here's the same chart, except of Vargas' vertical release point: 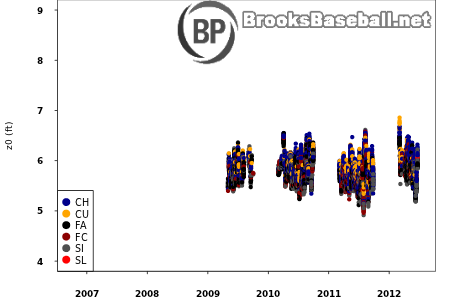 That's the same. It isn't Vargas' arm slot that's changed - it's his position on the mound.

I'm not going to bother showing you all of the images, due to the potential for overload, but this same trend is present when Vargas has faced both righties and lefties. Against lefties, he's released the ball less behind their backs, if that makes sense. Against righties, he's also released closer to the center of the rubber. Vargas still throws from the first-base side of the mound, obviously, but to a lesser degree than he ever has.

Why the change? One figures this is intentional, and not just randomness of which Vargas is unaware. My immediate guess is that it might have something to do with gaining better control of Vargas' platoon splits. Releasing more to the first-base side would help Vargas against lefties, and hurt him against righties, for visibility and perceived-velocity reasons. Vargas mostly faces righties. Let's examine just the most basic platoon splits:

As Vargas has shifted his release point, his strikeouts and walks against lefties have gotten worse, and his strikeouts and walks against righties have gotten better. I'm ignoring home-run rate because there's too much fluctuation, and I'm ignoring groundball rate because I can't think of a good reason why that would be affected.

2012 is still a smaller sample, since it's only the middle of the season, but those numbers are interesting, for Vargas. Yet we can't prove it has anything to do with the release-point change. I can't prove whether or not those numbers are statistically significant, and all I can show is that there's a correlation. Maybe Vargas has also changed his pitching approach in ways that I didn't find immediately visible.

Whatever the case, Vargas' release point has been changing, and his platoon splits have seemingly been changing. Vargas overall has remained more or less the same. I should probably try to think of a more compelling way to conclude this post. Dinosaurs!