Within this post, UZR is used only to illustrate a general point. Please spare me your concerns with the UZR formula and share them instead with a dog. Have you ever discussed UZR with a dog? It's vitally important to try new things.

Brendan Ryan became a regular major-league shortstop in 2009. Since then, 30 different shortstops have played at least 2,000 innings at the position. Ryan's UZR per 150 games ranks the highest out of all of them, a little ahead of Clint Barmes, a little more ahead of J.J. Hardy, and so far ahead of Yuniesky Betancourt that Michael Strahan's like "that's a big gap." UZR may not be inarguably is not perfect, but it supports the idea that Brendan Ryan is an outstanding defensive shortstop, which is not a controversial idea. It's the biggest part of his identity. Peer shortstops have referred to Ryan as being elite, as being the defender they strive to become.

It's interesting that, in 2012 alone, Ryan's UZR per 150 games is more than twice as high as that of the next-best shortstop. Of course we can't take a ~4-month UZR sample at face value, especially when the player in question has been benched occasionally on account of his terrible offense, but has it felt to you like Ryan has been even better this season than before? I've gotten that vibe, as subjective as it is. There have been precious few baseball players I've ever trusted to do something more than I trust Brendan Ryan to turn a play into an out. I trust Brendan Ryan's defense more than I trust that Miguel Olivo is going to swing.

Phone: /rings
Olivo: Hello?
Salesman: Hello, homeowner, I'd like to pitch something to you.
Olivo: /swings
Salesman:
Olivo:
Salesman:
Salesman: What was that?

According to FanGraphs, Brendan Ryan's 2012 WAR is more or less equal to those posted by Curtis Granderson, Jose Altuve, Adam Dunn, and Michael Saunders. Has Ryan actually been that valuable? Probably not. Has Ryan been a whole hell of a lot more valuable than his batting line would suggest? Obviously, yes, of course. Dismiss the importance of defense all you want, but when it comes to defense, there are few better than Brendan Ryan. If there's anybody better at all.

This is all an intro to highlight a play that Ryan made last night in the bottom of the eighth. It's a play that Ryan didn't even turn into an out. Alcides Escobar hit a groundball, and he finished with an infield single that moved runners to the corners. Ryan isn't going to get huge credit for this defensive effort in any of the numbers, I don't think. But at the same time, how many shortstops do what Ryan did? How many shortstops keep that grounder from getting into left field? Not many of them. Maybe not any other of them? We're used to assuming that the best defensive plays are those that result in at least one out. There's no reason why that should have to be true. 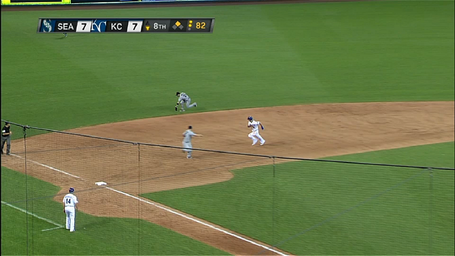