First, this very good FanPost. For the most part, the Mariners have always taken great care of their fans, even when the on-field product has featured visible stink lines. You could make the argument that the Mariners need to take better care of their fans now more than ever, and that's not untrue, but let's stop thinking like that because I don't want to take anything away from the story.

Second, this picture of Michael Saunders now exists, and you should be aware of it. 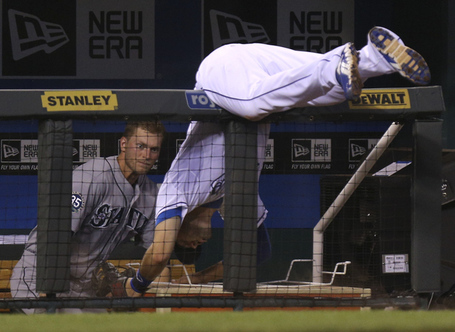 Off the top of my head, I don't know who that Royals player is. It probably doesn't matter, because from the looks of things, Michael Saunders killed him. Don't trespass into Michael Saunders' dugout.