(This story is older, but still great. Front page'd with the permission of the author. Happy Father's Day.)

My son Preston, who is 11, lives in Oregon with his mom. He spends summers up here with me (as well as some other school breaks) but generally doesn't get to see me for Father's Day or my birthday (August 14th). He really wanted to buy me something for both holidays, but as you can imagine, 11-year-olds aren't exactly strapped with cash. He saved what money he could from chores and an allowance, but after buying himself a video game and a new Sonics hat, he was left with pretty much no money.

I told him I didn't want a present, but that I'd love it if he saved his money and bought himself something instead. He didn't listen.

The first week he was here, he wrote a letter to the Mariners. His letter, which I just found out about from my fiancee, said the following:

Hello Mariners, my name is Preston and I'm 11. My dad is a really big Mariners fan and his favorite player is Franklin Gutierrez and his second favorite is Dustin Ackley. I saved some money but I don't have a bunch but it would be really cool if I could have the whole entire team sign a ball for him for Father's Day and his birthday thats coming up. He loves baseball and thinks the Mariners are cool. Thank you

Aside from the awesomeness of the above letter (which I cleaned up a bit), the fact that my son would remember that Guti is my favorite player while willing to pay for something for me just blew me away. The Mariners response blew me away even more.

Today, a package arrived. Inside that package was a Dustin Ackley jersey t-shirt for Preston, a Franklin Gutierrez player card, a Mariner's team schedule, a Guti autographed baseball inside a protective case, and a hand written note: 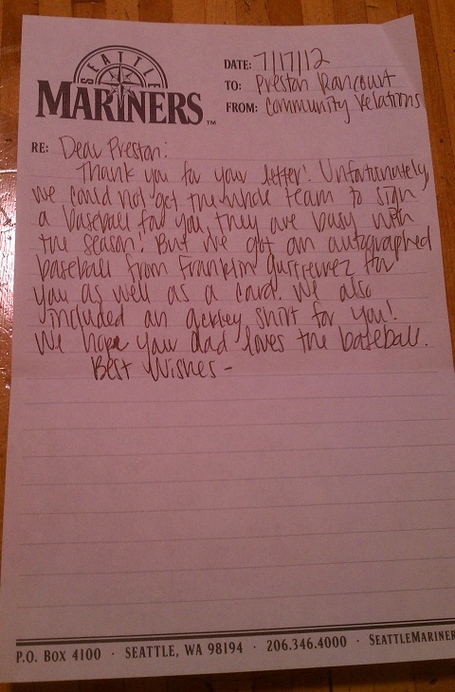 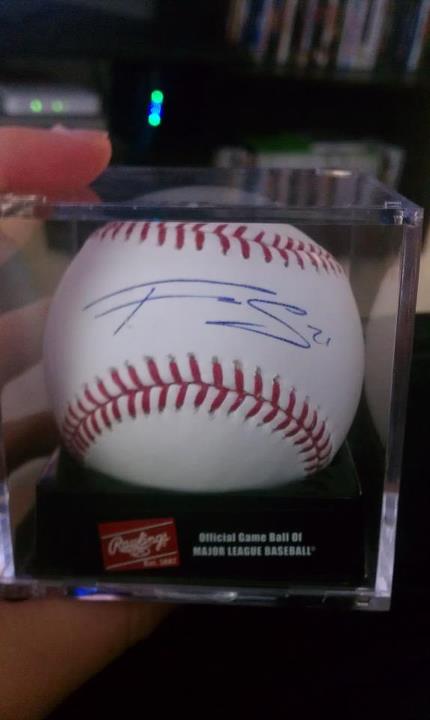 I understand the Mariners get destroyed on twitter and just about everywhere else, but this is pretty fantastic. Not only did they acknowledge him with a handwritten response rather than some pre-typed template that they send to everyone, but they actually gave him stuff that we would have paid good money for. He was more excited than I was, understandably. The ball is on display in his room, but he wants to make sure everyone knows that it's mine. I just need to remind people he's the one who got it for me.