At first, the 2012 Safeco Field park effect was a quirk. A fleeting anomaly of interest, something to notice before all the numbers started to average out and it disappeared. It was like when somebody homers on the first two days of the season, and then someone else observes "he's on pace to hit 162 homers." Well, sure, but that's not keeping up, obviously. In time, Safeco would act normal. Not normal-normal, but Safeco-normal, which is still freaky but a familiar kind of freaky.

It doesn't feel like that anymore. Which, on the one hand, is silly - the Mariners have played just 44 games at home. Since when do we make much of 44 games? This most recent sample pales in comparison to the earlier sample, which is of considerable size given that Safeco just turned 13. But this has gone on long enough to feel like something, and Safeco these days is dominating so many conversations. People want change. People want runs.

Even if there's nothing sustainably special about the 2012 Mariners' home/road splits to date, one can't undo what's already happened over a majority of the season. And what's already happened is kind of unbelievable. We've all talked about it, but maybe it hasn't sunk in, or maybe it hasn't sunk in enough. The Mariners have batted more than 1500 times at home, and they've batted more than 1800 times on the road. Some numbers:

This split is insane, even if it isn't going to keep up, and when you get down to it it makes things very difficult to evaluate. With the hitters and the pitchers alike. We've all been frustrated by the young hitters' lack of production, but what if it's all been Safeco? What if the offense is actually all right, in truth? What if Jack Zduriencik has done a fine job of accumulating talent and it's just our own weirdass ballpark that's blocking us from seeing it?

I don't think things can be explained away that easily, and the young hitters do need work, but it's nights like tonight that make matters seem less dire than they did yesterday. Tonight the Mariners played a baseball game that wasn't in Safeco Field, and tonight the Mariners scored nine runs and ripped three dingers. Smoak went yard, Dustin Ackley went yard, and Casper Wells went yard. Those are three potential building blocks doing something they've had a devil of a time doing otherwise.

It's never before made sense that there could be a Home Mariners and a Road Mariners. It still doesn't make a lot of sense, but as long as the splits are this crazy, and as long as we're grasping for positives, consider the Road Mariners a positive. Not so much on the pitching side, but it's not the pitching side that's presently supposed to include a wave of young talent. Jason Vargas and Blake Beavan have gotten bombed on the road and that's okay with me.

Of course, before we make too much of the Mariners' effort tonight, we should take into consideration the identity of the Royals' starting pitcher. Jonathan Sanchez allowed seven runs and retired four batters. The other Royals allowed two runs and retired 23 batters. Sanchez was booed as he came off the mound, and not just because he was lousy once - because he's been lousy all along. Sanchez's ERA is 7.76. Maybe it ought to be worse than that.

He's started 12 times and lasted not even 54 innings. He's whiffed 36, he's walked 44, and he's hit five, which people don't notice but which count just like walks. What Sanchez hasn't really had is a dinger problem, at least until today, but that's mostly because he refused to put pitches in the strike zone. Sanchez has been as disastrous a starting pitcher as I can remember, excepting Anthony Vasquez, because Vasquez wasn't a real Major League starter. I'm not convinced Vasquez was a real baseball player.

And to make matters worse, you might recall that the Royals didn't just end up with Sanchez somehow. They didn't add him as a reclamation project on the cheap. They got him and a non-special prospect for Melky Cabrera, who leads the league in hits. Kansas City just got to see Melky Cabrera in the All-Star Game last week. He homered and won the game MVP. Cabrera's a big reason why the Giants are in position to return to the playoffs. If you squinted, Sanchez seemed like a reasonable gamble for the Royals to make, so at the time the trade wasn't a disaster, but this is all such a nightmare now that I don't think people want to hear it, just as Mariners fans don't much want to hear that Chone Figgins made sense as a free agent. Let us wallow. Let them wallow.

Sanchez gave Royals fans a lot to wallow in tonight, as this was a 5-0 game before the Mariners had an out. Wells homered to left-center on an elevated first-pitch changeup. Smoak homered on a low first-pitch fastball. Sanchez was knocked out in the second when Wells tripled on an elevated 2-and-2 changeup. Ordinarily I think of Casper Wells as being something of a low-ball hitter, but tonight he punished two pitches at the belt, albeit pitches from Jonathan Sanchez and therefore bad, hittable pitches.

At 7-0 that early, this game became oddly less watchable. The outcome wasn't really in doubt, no one tunes in specifically for the purpose of watching Jason Vargas throw cutters, and after scoring that quickly the Mariners' offense was only going to slow down and probably seem like it was letting up. As the Mariners scored just two times over the final 7.2 innings, it was easy to forget that they'd scored seven times over the first 1.1. Distribution can play tricks with the head when what matters is overall total. It's not that the Mariners scored seven runs and then two runs; it's that they scored nine runs, and that's a lot, even against Jonathan Sanchez.

I'm not all that familiar with watching Jonathan Sanchez pitch, so I don't know how he normally looks. But if I wanted to try to interpret his body language after allowing a pair of early dingers, I'd note that it almost looked like he was smirking underneath. 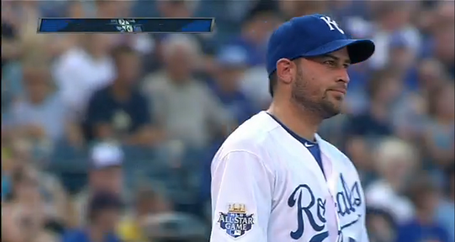 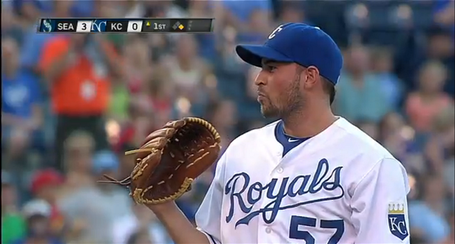 I need to cut off here because I was set back by other things and now I'd really like to eat dinner. Thankfully none of the Mariners' pitchers did anything particularly notable. Jason Vargas walked three, allowed two homers, and didn't strike anyone out, so the Safeco effect struck again. Dustin Ackley's homer in the sixth came on a high fastball from a lefty, and he hit it out to left-center. All three of the homers went out to left-center and I think the wind was blowing in that direction, but Kauffman isn't ordinarily a homer-friendly ballpark, and Ackley isn't ordinarily a source of power to left-center field. Lately there's been a lot of positive talk that Ackley is beginning to figure it out. There hasn't been that talk about Smoak or Jesus Montero, so maybe it's true or maybe no one has any idea. Today, Ackley hit a dinger. Saturday, he hit a ball off the center-field wall. Those are two things, and we'll watch for more things.

Tonight the Mariners forced the Royals to use tomorrow's scheduled starter in relief. Tomorrow's official matchup now is therefore TBD vs. TBD. Will the respective starters be determined in time for the baseball game? I think that, by definition, yes.