The Mariners and the Diamondbacks played a Wednesday matinee, and the final score of the game was 14-10 in Arizona's favor. The Diamondbacks are now back to a game under .500, while the Mariners are back to a game under ten games under .500. Given the number of runs and longballs this afternoon, people might have jokingly referred to this game as a home-run derby. A home-run derby instead of a baseball game! That's the joke, because it was a baseball game, but it had an unusual number of home runs in it.

But if this were a home-run derby, it would've been one disappointing pile of shit. The leaders would've been Kyle Seager, Franklin Gutierrez, Aaron Hill, Jason Kubel, Miguel Montero, John McDonald, and Justin Upton, with one. Can you imagine a home-run derby with seven total home runs? The official Home Run Derby is already unwatchable, but take away the home runs and you're basically watching David Eckstein take batting practice. This wasn't even close to being a home-run derby. Have the people calling it that ever even watched a home-run derby? This was clearly a baseball game that just had a few extra home runs.

I'm not counting the Ryan Roberts inside-the-park home run, by the way, because inside-the-park home runs aren't allowed in the official Home Run Derby. If they were, the first round would never stop, and we'd still be watching the first Home Run Derby round ever, live, on ESPN. Because have you seen the shitty kids who try to shag the balls in play? Given the way they move around in the outfield all of those kids might literally be blind. It's like they respond to the auditory cue of the bat hitting the ball, but they have no idea in which direction to run so they run in all directions and collide with one another like police cars in bad action movies. Even if a particularly enterprising young kid were to pick up the baseball and try to return it to the infield, he would fall down and then forget how to get up. The official Home Run Derby outfield is effectively a pasture for the most worthless children in America.

Jason Vargas started and allowed two singles, two doubles, and five homers while retiring 13 batters. In keeping with last night's Mitch Hedberg theme, with Vargas, sometimes we get Smokey the Bear, and sometimes we get Smacky the Frog. In this example, Smacky the Frog is the bad one, and we tend to see the bad one when Vargas is pitching on the road.

I don't like to make a habit of looking at current-season splits, especially when it's still June, but this year Vargas has allowed four homers in six starts at home, and 16 homers in ten starts on the road. That might not even be statistically significant, I don't know, but that difference is so extraordinarily great that it seems to pack meaning.

If that doesn't pack meaning, this does. The Mariners acquired Vargas after the 2008 season. He's been a member of the pitching staff ever since, throwing nearly 600 innings. Here's the batting line he's allowed in Safeco Field:

Here's the batting line he's allowed on the road:

All players are expected to be a bit worse away from home, and the sample sizes here still aren't enormous, but since 2009, opposing batters have hit like Sean Rodriguez against Vargas in Seattle, and they've hit like Vernon Wells against Vargas everywhere else. I don't mean recent, mediocre, Angels Vernon Wells - I mean career Vernon Wells, the Vernon Wells who still has a .790 OPS even with his late-career decline. The line that Vargas has allowed on the road is virtually identical to the line that Wells has posted since breaking into the Majors.

Vargas is arbitration-eligible after the year, and I suspect he'll be the subject of a few calls come trade deadline time. He's a proven left-handed starting pitcher, which executives often overvalue for some reason. But other executives are going to know where Vargas has been spending half his time. Seldom should analysis ever begin and end with home/road splits, but with Vargas I'm not sure you have to look at much more. He could succeed in a big ballpark. He could be a real problem anywhere else.

Today, Vargas threw 104 pitches. Just 55 of those pitches were strikes, which should tell you enough about how poorly he was locating. He was missing, and to too many batters, he missed up. Half the time, he can get away with that to some extent. Not elsewhere. Certainly not in Arizona.

Casper Wells finished 2-for-4 with a walk, extending his recent hot streak since returning from Tacoma. Wells obviously won't continue to hit like this, just as Michael Saunders wasn't going to continue to hit .600 or whatever he was batting over that run, but taking a big step back, Wells upped his career OPS to .809. He's batted just 415 times in the Major Leagues, and more of his batted balls have found ground than the average, but Wells is a versatile, defensively-proficient outfielder who has yet to hit poorly over an extended stretch when he doesn't have symptoms of vertigo. I don't know how much arm is truly necessary to play right field, but Wells has more than enough arm to please traditional baseball people, and basically Casper Wells could be a legitimate regular is what I'm saying. I'm not sure why he gets sold so short, although his 2012 usage pattern hasn't helped.

Kyle Seager is on pace to bat 605 times, and hit 23 home runs. He's also on pace to hit 41 doubles. Basically, he's on pace to post a .475 slugging percentage, which is his current slugging percentage. Would you guess that his BABIP is .297? He actually posted a slightly better BABIP in his cup of coffee a year ago. Last year, we weren't sure if Seager had enough strength to be a regular. In the spring, we were encouraged that Seager was showing more strength. Now he's established beyond any reasonable doubt that he has more strength, and he's 24 years old until November. Chone Figgins might not have turned into the Mariners' answer at third base, but if Figgins hadn't been a giant ant hill of crap - last Saturday on a hike I saw a giant ant hill labeled "Giant Ant Hill" - who knows what might have happened with Seager? In the second half of Figgins' contract, the Mariners found a possible long-term answer at third. To answer your question, I guess maybe the ants built their hill out of crap they found? It sounds disgusting to you but ants aren't picky. They just want somewhere to live and maybe we are the root of our own unhappiness by not appreciating that which is readily available. 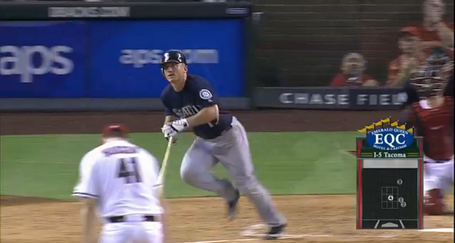 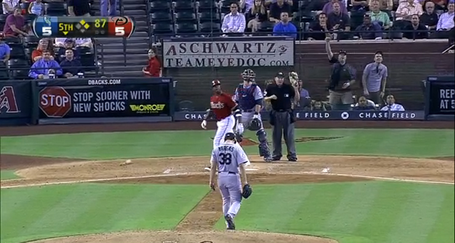 Once I came to terms with this loss, which was easy to do when the Diamondbacks went up 14-6, I actually came away somewhat encouraged, because with two on in the eighth inning, Franklin Gutierrez got a high fastball from Mike Zagurski, and he ripped it out to left field for a home run.

It was a hittable pitch, yes, and it was thrown by a lefty, yes, but during the spring we got so excited about the prospect of Gutierrez having regained his strength. When he got injured again, we were worried that he might lose his strength. We just wanted to see Franklin Gutierrez with his strength. Today he hit a home run. It was his first home run since last May 25, in Target Field. Last year Guti didn't go deep once over his final 324 plate appearances.