Pitching mechanics can be an incredibly difficult thing to analyze. Many of the adjustments that pitchers make are very subtle, so we might not notice them. Generally, television doesn't give us great angles or resolution. Mechanical problems frequently have to do with inconsistency, so mechanics might change from pitch to pitch. And very few people are qualified to analyze pitching mechanics. Very few people know how things ought to look, and what's better and what's worse. Pitching mechanics are a popular subject of discussion, but few of the people who discuss them do so from positions of knowledge.

So when I heard that Felix was tweaking his mechanics after watching himself on video, I was encouraged that Felix might become better, and I was skeptical that I'd be able to notice any difference. Indeed, I spent far too long this morning watching different clips of Felix pitching. Nothing about his throwing motion jumped out. Then I went back to Drayer's post and reconsidered. Quote:

He has made one small change to his delivery, he told us, starting straight to home plate rather than a bit to the side. Carl Willis told him to try this after noting that there were times when he was going too far back with his twist.

I wasted my time looking for the wrong things. Here's Felix in that Angels start of which he's not proud: 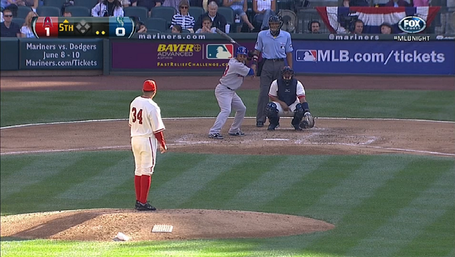 Here's Felix against the Padres after recovering from his back injury: 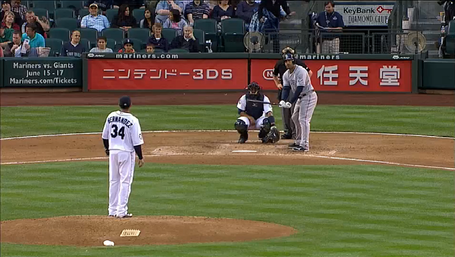 Here's Felix yesterday, against the Giants: 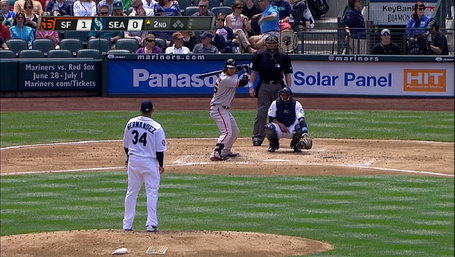 Seems simple, right? Too simple to accomplish anything? It's just Felix's starting position, and he has the entire rest of his throwing motion to go. But sometimes the simplest, stupidest tweaks can have profound results, and Felix says that yesterday he had his fastball command, which he'd previously been missing. He felt like he was finishing his pitches better and getting a boost from his legs, and the numbers bear out that he was throwing a little harder and landing more strikes. I don't know about command since that can't be measured easily, but I'll take Felix at his word. 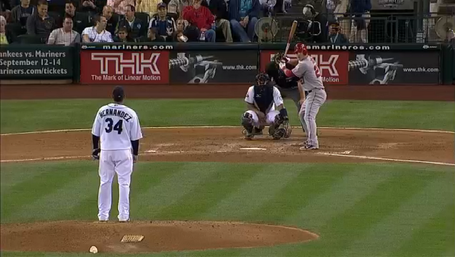 Facing the catcher right on. I didn't check out a ton of 2011 video so I don't know if Felix was doing this all season, but he did against the Angels, so.

Felix made a tweak to his position on the mound, he got comfortable with it, and he says he felt terrific. Before that, he didn't feel terrific, and his performance wasn't terrific. If Felix used to face the catcher right on, I don't know what would've made that change, but now it looks like it's changing back. After one start, signs are positive.

Anecdotally, I can say that, when I was going through Felix's video from earlier in the year, he would somewhat frequently appear to release "early", not getting great forward extension. His back and head would be up more than normal, and this would go along with Felix saying he wasn't always finishing his pitches. Yesterday looked better. This isn't necessarily meaningful yet, because it's anecdotal evidence based on a few clips from a few starts, but it's something to monitor.