Share All sharing options for: Justin Smoak And Safeco Field 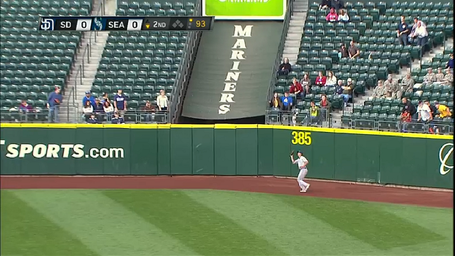 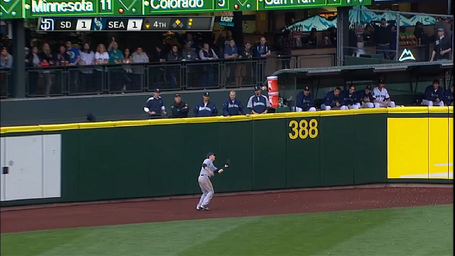 The immediate angle was, Safeco's too big. It's too pitcher-friendly. It kills fly balls, which discourages batters, which leads to bad habits, which leads to worse batters. This is something worth discussing, and it has been discussed. It will continue to be discussed at least until the Mariners return to being competitive at some point.

But there's another angle here as well. Smoak, via Geoff Baker:

Every hitter has probably had a home run taken away by Safeco Field, given enough playing experience. That's one of the things that pitcher-friendly ballparks do. But consider Smoak's quote, and especially the second part. "That's all I've got." It isn't scientific, and it's not like Smoak is saying he charged that ball with 100 percent of his power potential, but that's a worrisome quote from a first baseman who's supposed to be a slugger.

When the Mariners signed Richie Sexson, some people argued that he was too strong to be hurt by Safeco. That he could hit home runs anywhere. Sexson could absolutely hit home runs anywhere, for a time. Justin Smoak doesn't have Richie Sexson power. Smoak put just about everything he had into that fly ball in the fourth inning last night, and it died in front of the fence.

It isn't a problem if Smoak occasionally loses a home run, because that'll happen, for both teams. But Smoak's still an unknown, and we're looking for signs of what he could become, and evidence suggests he isn't unusually strong. He might not even be usually strong, for a first baseman. I know I keep referring back to it, but Smoak has that 2012 team commercial in which he punches down a tree in the forest for purposes of fashioning baseball bat. It's implied that Smoak is magnificently strong. Where is that strength? Why not give that commercial to Miguel Olivo, who we know to be strong? I get that Olivo isn't a guy to market around, but Smoak hasn't done much to make himself a favorite.

Justin Smoak doesn't draw a ton of walks, and he struggles to make consistent contact. He doesn't have the defensive ability we thought he might when the Mariners first traded for him. Smoak could make up for a lot of that by slugging tons of dingers, but without the strength that Smoak still hasn't really shown, that'll be a challenge. Smoak would have to hit a lot of line drives and wall-scrapers.

Justin Smoak put all he's got into a fly out to the left-field track last night. Michael Saunders launched a 436-foot bomb to dead center. Smoak hit a ball 436 feet once, in 2010, for the Mariners in Texas. It's more about home runs than it is about long home runs, but if Smoak isn't capable of long home runs, you wonder of how much he is capable.