Let Us Take A Closer Look

Share All sharing options for: Let Us Take A Closer Look

As you most certainly know by now, Tuesday night the Seattle Mariners lost to the Detroit Tigers 6-4. Depending on how you look at it, the Mariners either came very close to catching the Tigers, or they did not come close to catching the Tigers at all. The game ended when Jesus Montero fouled out to right field with three runners on base. The foul fly was not caught by Don Kelly just inside the foul line. The foul fly was caught by Don Kelly as he fell over a low wall into the seats. The lack of Mariner-friendly fan interference has made some people quite upset. It is the fan's right, after all, to interfere when players come to the seats. I don't know if that's actually the fan's right, but that's assumed to be the fan's right. I think the general consensus is that anything goes when the ball's in the stands. You can even pants a player if you want to. Shouldn't have come into the stands.

I thought we would examine with the help of some screenshots. I'm not going for anything in particular here and I'm certainly not trying to prove any point, but I don't know what else to write about at the moment because it turns out I kind of write everything in most of my game recaps. Let's see what happens here. Do most people write intending to get to a point? That must be weird. This way is so much more suspenseful. 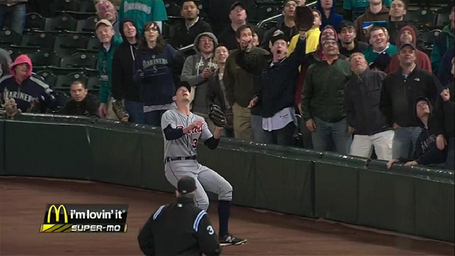 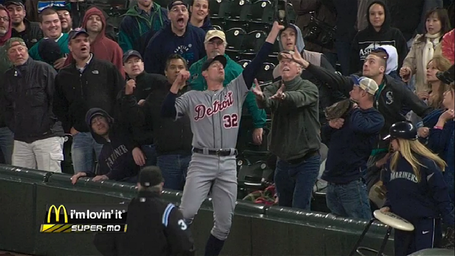 The ball falls easily into Don Kelly's glove. There are some people trying to interfere. There is one man, in a Mariners hat, backing away, trying to give Kelly his space. I think this is the man people are most upset with. Somewhat understandably, I suppose, although it's not like fans prepare ahead of time for a situation like this one. That guy had to think on his feet, and he had to think on his feet with a professional baseball outfielder rapidly approaching his person. His instinct was to get out of the way and I actually think that's admirable. Under-discussed aspect: that man in the turtleneck behind Kelly trying to reach for the baseball? He was wearing a Tigers hat. A Mariners fan gave Kelly space to make the catch, and a Tigers fan tried to get into Kelly's space and interfere with the catch. 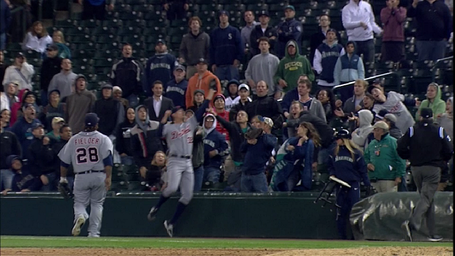 Another picture of people watching and reaching or not reaching. One wonders what the one Mariners fan could've done. He couldn't have casually reached up and taken the baseball away. He would've needed to deliver something of a body blow. It would've taken significant effort to make Kelly unsuccessful. 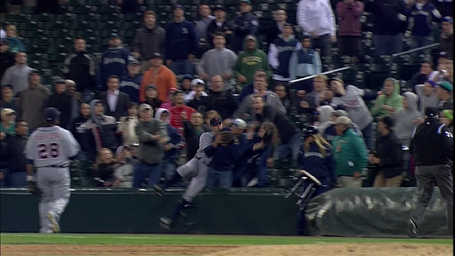 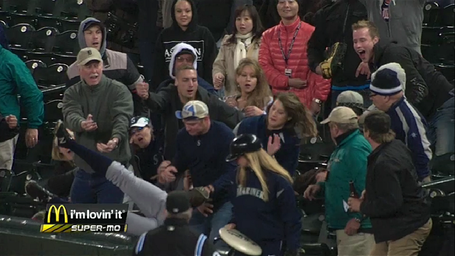 Don Kelly is falling to the ground, out of control, and in this screenshot he is touching the Mariners fan's penis. In the caption above, I referred to Don Kelly as ungrateful. Maybe Don Kelly was in fact extremely grateful. This is probably something I shouldn't continue discussing on a baseball blog. But: Don Kelly might've expressed his appreciation after all. Do any of us really know Don Kelly? 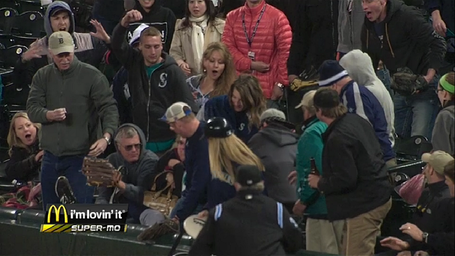 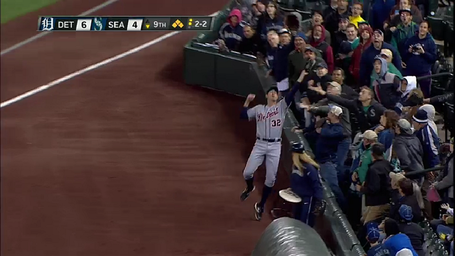 And this is a different angle to show that Kelly might have actually made his catch in the field of play. He certainly didn't finish his catch in the field of play, but look where the ball is, and look where the wall is. Fans are specifically instructed not to interfere with baseballs on the other side of the wall. One can be frustrated with the Mariners fan who gave Kelly space, but can you really be mad at him? Can you stay mad if you give it some thought? The fan didn't interfere with a baseball game played between players. The fan wasn't a part of the game, so he didn't make himself a part of the game. He acted not out of greed, but out of benevolence, out of humility. I guess you could say he acted un-American, but is that a critique? If you believe that to be a critique, what does that reveal about you? Let's stop talking about the baseball fan and start talking about you.

Last night's game ended with a really good catch in foul territory by Don Kelly. He caught the baseball and fell head over heels into the stands. The umpire ran over some seconds later to verify that Kelly had the ball in his glove. He did, so the umpire signaled out, and the game was over. We'll never know if the baseball remained in Kelly's glove the whole time, or if it fell out and found its way back in. It's like when football referees untangle a pile to decide on a fumble. Who knows what's going on in there? Last night's baseball game ended in an interesting way. That's more than could be said about a lot of other baseball games.