Share All sharing options for: Mariners Welcome Back Doug Fister With Friendly Prank

You might've seen this, but the other day, when Albert Pujols finally hit his first home run of the season, he returned to an empty dugout. It would've been easy and predictable for the Angels players to give Pujols the cold shoulder. They decided to take it one step further and abandon the dugout completely. As much as I hate the Angels and as much as I was hoping Pujols wouldn't homer ever again, I thought it was clever. I always enjoy watching the pranks that baseball players pull on one another.

The Mariners allowed Fister to cruise, just as he'd cruised on countless occasions before. Fister was fresh off the disabled list and held to a non-specific but limited pitch count. Somehow, on 73 pitches, he made it all the way through seven innings. I say "somehow" as if I don't know exactly what the Mariners were doing. They were just gift-wrapping outs. They couldn't have made Fister's job any easier. When he departed, he had allowed four hits, without a walk and without a run.* His team was leading 2-0. Fister was in line to pick up the 21st win of his career, a total which should be much higher, but which is what it is.

* I just now noticed the potential wordplay between walks and runs. It's my ninth year of baseball blogging on a daily basis. I'm amazing!

Of course, I type all that as if the Mariners had much to do with their comeback in the first place. The bullpen kept the Tigers in check and in the bottom of the ninth the Mariners were by no means uninvolved, but that was all fueled by Octavio Dotel coming completely undone. It's funny - for a while, the Mariners were a little unlucky. The Tigers' first run scored when Prince Fielder lifted a towering pop-up into no-man's land in left field, and Brendan Ryan couldn't make a sprawling catch. The Tigers' second run scored as a result of poor contact against Hisashi Iwakuma. Those were the game's two runs, and though the Mariners were behind, it wasn't like the Mariners were getting badly outplayed.

Then the luck turned, if you want to refer to it as luck, which I don't like doing but which I already started. Octavio Dotel began the ninth for the Tigers because both Jose Valverde and Joaquin Benoit were unavailable. You recognize Valverde as the closer, and Benoit is a very good reliever. Dotel is very good too, but he was only pitching there because the other guys couldn't. And then out of nowhere, Dotel proceeded to have one of the worst and one of the ugliest outings of his entire vast career. Dotel has floated around, but not because he's been unsuccessful; since 2008 he's posted a 122 ERA+ with eleven strikeouts per nine innings. You can ordinarily rely on Octavio Dotel. He shouldn't have run into trouble tonight, but he created some of his own.

Dotel walked Brendan Ryan to lead off. Brendan Ryan, who has three hits since three Saturdays ago. Dotel walked him on five pitches, and none of the four balls were all that close. Then Dotel walked Ichiro on four pitches. The fourth was close, but Dotel hadn't earned a borderline call in his favor.

Ball one to Jesus Montero was a wild pitch, allowing the runners to advance. Ball two followed, and then ball three crossed Alex Avila up, leading to a passed ball that allowed the runners to advance once more. There was the Mariners' first run, created entirely by Dotel out of nothing. Dotel violated universal laws tonight. The tying run was 90 feet away, and because Dotel had fallen behind Montero 3-and-0, he had to come back with fastballs. Two of them were decently placed. The last one was not, and Montero destroyed it.

That was the end of Dotel's evening, but it wasn't the end of Dotel's influence, and a bunt and a sac fly off a lefty later, the Mariners had their walk-off win. Their improbable, walk-off, 3-2 win, after eight innings of offensive inactivity. It wasn't even necessarily that the offense finally showed up. It was that Dotel practically insisted that the Mariners put up a fight. The Mariners didn't want to fight, so Dotel took to hitting himself in the face until the Mariners delivered a blow of their own.

I was so prepared to write a recap about a nothing game. I had most of it mapped out in my head. Once the Tigers went up by two I started taking care of some laundry and thinking about how to approach the unapproachable. I had ideas, man. Promising ideas. Ideas I've now forgotten because I was too stupid to save them for later. But I could've sworn I'd be using them tonight. One of the last images I ever thought I'd see at the end of this game is the image posted below: 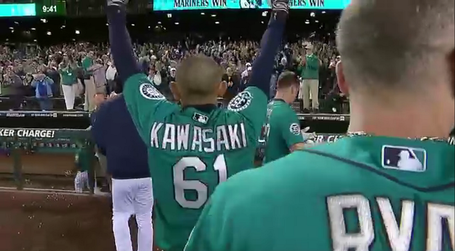 Munenori Kawasaki walking back to the dugout, arms up, a hero. The Mariners victorious. I thought the ninth inning would go like the eight innings before, and that the Mariners would seal a loss we'd forget about by Wednesday. The ending we watched was anything but the ending we expected, and, I don't know, does this make up for Tom Wilhelmsen gift-wrapping a game for the Twins? Baseball doesn't work like that, but the human brain works like that. A game like this helps to negate some bad memories. A game like this helps.

I got interrupted by a long phone call in the middle of all that that knocked me off course, so hopefully it still managed to flow. If it didn't, consider it a crooked write-up on a crooked baseball game. Now we're going to the bullet holes, and where ordinarily after a crazy baseball game I'm overloaded with potential bullet holes, I've got a pretty dry well for this one because for eight and a half innings the game was dreadfully unremarkable. Remember that first 95 percent? That was the worst! That wasn't the actual worst, but that was the hyperbole worst. Man, it sure does feel unpleasant when you watch your team get shut down by Doug Fister. Is that what Fister was doing to other people as a Mariner? I feel so bad for them.

Tomorrow it's Justin Verlander against Kevin Millwood, and it's the rest of the Tigers also against the rest of the Mariners. Your first thought is that the Mariners are probably fucked. I'll remind you though that the Mariners have oddly had good success against Verlander in the recent past. Then I'll remind you that that doesn't really mean anything with regard to the future. So we're back to your first thought. But look at the trip that we took to get there. It's the journey, not the destination. I took pictures!