Share All sharing options for: Mariner Swings Against Doug Fister

Here's a quick note while you wait for Jeff's more complete recap. I was originally going to type that Doug Fister cruised through his first game back from the disabled list, but I think cruised, even in the slang-type sense, is too strong of a verb for how unperturbed he was by the Mariners' attempt at offense tonight. Doug Fister idled through tonight's game. He probably should have just pitched this one in his pajamas.

He walked nobody and took just 73 pitches to get through seven innings of work. Such efficiency from the opposing pitcher can elicit sarcastic praise of Eric Wedge's penchant for wanting hitters to be aggressive. We've gone over this before, but tonight's game provided a great example of two key points surrounding that issue. The first is that judging Wedge by his actual comments and context, what he has actually stressed is that he wants hitters to be aggressive on strikes, not swing unconditionally.

The second point is that Wedge's stance is totally defensible. It'd be great (from a winning perspective, but probably not from a viewing enjoyment one) if the Mariner hitters would sit there fouling off strikes all the time and racking up pitch counts. But realistically, all we should be asking for in the discipline department is for the offense not to swing at balls and not to take hittable pitches.

Tonight, by my count, Doug Fister threw 50 of his 73 pitches within the reaches of the strike zone. The Mariners swung at about 37 of them. That's a perfectly fine figure, as league average is usually around 65%. Here is a heat map of the locations of pitches that the Mariners offered at. 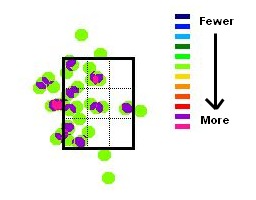 Keep in mind that the black strike zone outline is the rule book version. It doesn't reflect the reality of the lefty strike so often called on the outer half against left-handed batters, of which there were seven facing Fister. Of the 39 swings taken by Mariner hitters against Fister, maybe three or four were on clear balls and only four of the swings failed to make contact.

The Mariners were aggressive at the plate tonight against Fister, but aggressive is not a dirty word. Results aside, this was an example of the right way to be aggressive. Now they just need to figure out how to do something with the balls once they're hit.