It can be incredibly easy to make a baseball fan believe something. A year ago, based on small-sample numbers, I wanted to believe that Carlos Peguero was improving his plate discipline. Every spring, fans of every single baseball team believe their team has a chance, and probably a better chance than it actually has. Superstitions exist because baseball fans believe saying "no-hitter" will jinx a no-hitter. A fan will be willing to believe a good performance is sustainable, and willing to believe a bad performance is not. Baseball fans are full of beliefs, and optimism.

Tonight the Mariners hosted the Angels, and the Mariners lost by three runs. There is such a thing as a close-feeling three-run game. All a three-run game needs in order to seem close is for the losing team to have made the pitcher work. If your team is losing by three runs, but every so often it's hitting the ball hard, or it's getting the occasional hit, or it's working good at-bats and making the pitcher work for his outs, you'll have some confidence that a comeback is possible until it is no longer possible.

We're always ready to believe, and we'll start to believe at any positive signal. So I think it says something and a half that this three-run game might as well have been a twenty-run game. As soon as the Angels pulled ahead and the Mariners tried to bat, it became readily evident that the Mariners weren't going to do anything unless Dan Haren issued several consecutive intentional walks.

It doesn't actually work like that - games can turn around on a dime. The Mariners could've started hitting Haren in the second or the sixth or the ninth, and that would've been a normal baseball thing. Momentum and all. But feelings are feelings, and the feeling was that Dan Haren was able to do exactly what he wanted to do, and what he wanted to do was get the Mariners out all the time.

As soon as Dan Haren started to pitch, it looked like he was in absolute command. And he remained in absolute command throughout, such that, at the end, he was charged with but a single line drive. Haren faced 31 batters, and he struck 14 of them out. He'd never before struck out more than a dozen batters in a game. Since joining the Angels, he's averaged about seven strikeouts per nine innings. Tonight he quite literally doubled that. And he didn't walk anyone, although he came close, once, or maybe twice.

The Mariners felt a familiar kind of helpless, and while they haven't looked this helpless very often in 2012, they looked this helpless all kinds of often in 2011 and 2010, and those memories are hard to shake. Our impressions of the Mariners are still in some way colored by those older editions of the Mariners, and so in some way tonight was a return to normalcy. Coming up, they're celebrating a retro Felix Day. This was a retro Mariners Day, a nod to recent season past.

It was only a coincidence that the Mariners struck out 14 times and didn't walk upon Miguel Olivo's return to the lineup, but that's a fun fact for people who like to be bitter about sports. The Mariners also gave a vote of confidence to Alex Liddi by demoting Casper Wells, and Liddi responded by going 0-for-4 against Haren with four swinging strikeouts on the same pitch. Haren kept giving Liddi cutters low and away, and Liddi kept missing them. Eric Wedge said afterward he was frustrated by his team's inability to make adjustments as the game wore on, and while he wasn't talking only about Liddi, he was presumably talking a little about Liddi. Liddi threw in one of the worse defensive diving attempts I've seen, going after a foul pop-up and diving forward seconds before the ball came down. The ball also came down a few feet away. Alex Liddi isn't a left fielder, but these Mariners are all about on-the-job training.

What this baseball game was was the sort of baseball game we expected the Mariners to play against the Angels coming into the year. The Angels were supposed to feature awesome run prevention and some ability in the middle of the lineup, and the Mariners were supposed to be raw and generally under-productive. Today the Mariners struck out 14 times without walking, and Albert Pujols finished 3-for-4 with a home run. Granted, it was a home run off maybe the worst pitch Jason Vargas could have thrown: 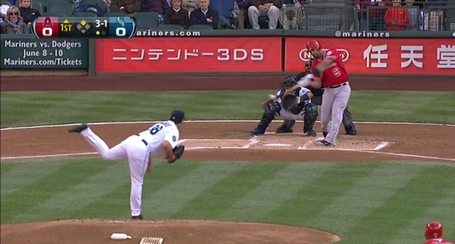 You watch a game like this and you wonder how Dan Haren ever gets hit, but Dan Haren does get hit sometimes. He usually looks more or less the same, and some hitters can handle him. None of the Mariners hitters could handle him at all and at this point I'm just rambling and being repetitive about how Haren made the Mariners look terrible. It's as if, if I write about this enough, I can put all of my memories of this game on the Internet and remove them from my physical brain. What actually happens is that, by writing about this over and over, I'm only cementing my memories of this game. We're all so self-destructive.

There's really just not much else to say about this. There wasn't even bullet-hole material. At one point Ichiro caught the second out of an inning thinking it was the third out, and he started jogging back in. Nothing bad happened as a result so it didn't matter, but I can't remember the last time we saw Ichiro look that kind of human. Even in Boston, when he dropped that fly ball, he was dealing with the sun, and the sun can blind anything. Has Ichiro ever forgotten about the number of outs? I wonder what this means for Munenori Kawasaki. Has Kawasaki's image of Ichiro been irreparably shattered? Alternatively, will Kawasaki strive to pretend all subsequent second outs are third outs? When Ichiro made the mistake, did Kawasaki run out of the dugout screaming? The camera never shows what you want it to show.

After all that talk of the Mariners competing and looking at least a little tough even in most of their losses, we were given this game, which was a three-run game in which the Mariners never competed. Jason Vargas did, and that's great for him, but after the top of the first he was stuck with a loss. He did a remarkable job the rest of the way, considering he was already doomed. The differences between good Vargas and bad Vargas are usually so subtle that it's hard to know how he did after an outing, but I can't imagine anyone's displeased with the way that Vargas pitched. He made that one mistake in a 3-and-1 count to Albert Pujols, but even the best pitchers are allowed to make some mistakes. The only pitcher who doesn't make mistakes is Hisashi Iwakuma, because he never throws pitches.

Tomorrow these same Mariners face those same Angels, with some key differences: Blake Beavan will slot in for Jason Vargas, and Ervin Santana will slot in for Dan Haren. The consequences of these substitutions are unpredictable, but at least if Santana's better than Haren was, he can only be better by so much. There's an upper bound for these things, and Haren approached it. Good for Dan Haren! He seems like a neat fellow.