Events Cause Mariners To Lose To Rangers

Share All sharing options for: Events Cause Mariners To Lose To Rangers

I never really approve when people say a baseball game turned on one or two pitches. It sounds nice, but I have trouble buying into it, because any given pitch could turn into anything from a strike to a home run. Games are always turning on pitches, even when it seems like nothing's happening, so to distill a game down to one or two or three individual moments is to ignore the fact that all the moments mattered. Tonight, for example, there were dozens of moments that mattered - some which were obvious, and some which were not.

But if I were asked to isolate the two moments that felt like they mattered the most, that wouldn't be very challenging. I had them in mind when the game ended, and I kept them in mind while eating dinner. I couldn't think of a better way to approach this recap, so here we are, doing this.

In the bottom of the first inning, the Mariners put instant pressure on Matt Harrison, getting runners to the corners with one out. Some of the pressure was relieved when Jesus Montero struck out, but then Justin Smoak singled, and the Mariners went ahead. Then Kyle Seager drew an eight-pitch walk. That meant the bases were loaded for Casper Wells, who was in the game specifically because the Rangers were starting a lefty. Not that Wells is some sort of platoon-mashing specialist - and honestly I'd rather not think about one of those again as long as I live - but he's a talented righty, and the lefty Harrison was dog paddling in hot water.

Harrison threw Wells a first-pitch fastball. Wells swung at it, which is the sort of thing that automatically drives a lot of fans crazy after a walk. But Harrison threw Wells a fastball over the middle of the plate, down in the zone, and that's Wells' hot spot. Wells put a great swing on the pitch and drove it to center field, and off the bat it looked like at least a double and maybe a grand slam. It kept on looking like extra bases until Josh Hamilton turned it into zero bases on the center-field track. Wells did everything right, but Safeco kicked him in the testicles, and instead of having a bigger lead, the Mariners emerged from the first with a narrow lead.

That's one moment. The other came in the top of the third, when the game's remaining runs scored. The Rangers had runners on first and second with two out and nobody in. Elvis Andrus was batting against Hector Noesi, and after Noesi missed with his first pitch, he came back with an absolutely outstanding low slider. Andrus swung through it, presumably thinking fastball, and Noesi was back in command. The next pitch was a fastball that Andrus took for a strike, and Noesi was one strike away from escaping. Jesus Montero called for a curve, which is Noesi's most seldom-used pitch, and Noesi looked to throw it low, below the zone.

What Noesi actually threw was one of the worse curveballs we've seen this season. He got the curveball part right, so he was part of the way there, and he aimed the curveball toward home plate, so he was more of the way there, but Noesi probably knew he screwed up as soon as the ball came out of his hand. I tell this story in screenshots, because I have only so many arrows in my quiver. I've got words, screenshots, and .gifs. Hope you like 'em. 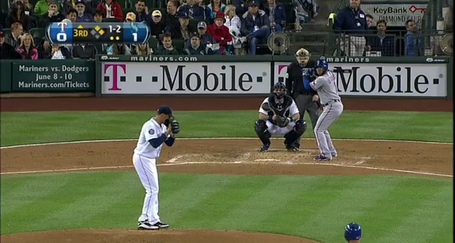 Noesi wants the curveball low. Montero won't give a target yet because there's a runner on second base. Right now, it feels like Noesi is going to get Andrus out, and the Mariners will remain in the lead. 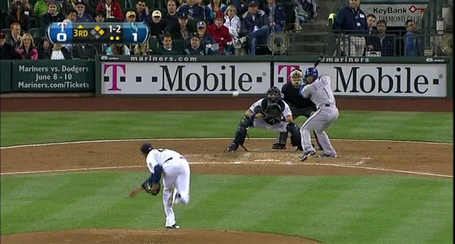 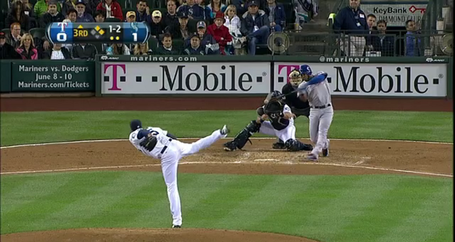 The thing about curveballs is that, unless you're Tim Collins or sometimes Tim Lincecum or sometimes Felix Hernandez, they're not great swing-and-miss pitches. They're good weak-contact pitches when you spot them, and they're good called-strike pitches when you spot them. When you don't spot them, and you let them hang up like this one, you're flirting with disaster. Then you go beyond flirting with disaster. You're like, "hey disaster, come home with me, I will give you sex." Hector Noesi hooked up with disaster, and while it was a one-night stand, what was done was done.

After Noesi allowed some runs in New York, I argued that he had mostly gotten burned on good pitches. There's no way to argue that this was a good pitch. This was a terrible pitch, and while Major League hitters won't punish every mistake, they'll punish a lot of them. As it happens, on the very next pitch, Josh Hamilton doubled home Elvis Andrus. That double came on a good pitch, a first-pitch fastball running away off the plate. Noesi did what he was supposed to do there, but Josh Hamilton has a four-digit OPS and an insanely aggressive swing rate, and this is just one of the things he does. Hamilton wouldn't swing at so many balls all the time if he didn't get rewarded.

Hector Noesi didn't make one mistake tonight. He probably made a lot of them, some worse than others. Every pitcher makes mistakes in games. This was Noesi's worst mistake, a terrible breaking ball right after a magnificent breaking ball, and Andrus plated the winning run.

An easy way to sell this game is that the Rangers got the big hit when they needed it, and the Mariners didn't. Or, similarly, that the Rangers got the big pitch when they needed it, and the Mariners didn't. I wouldn't find that satisfying. Absolutely, Noesi threw the wrong pitch and got burned. But it's not like Matt Harrison escaped the bottom of the first on account of his skill. He tried to allow a bases-clearing double or a grand slam. He threw the right pitch in the right place for damage to be done, and Casper Wells put the right swing on it. The ball just died. You could say that Wells should've hit the ball harder, but Safeco's gonna Safeco. Harrison was a hair away from having a much uglier start.

There were other moments that mattered, of course. Specifically, all of them. But there were other big moments later on. In the fifth, Jeff Datz threw up a stop sign for Brendan Ryan at third base when he probably could've scored on an error. In the eighth, the Mariners began with consecutive singles, and then the runners never budged. Again, this baseball game didn't turn on two pitches.

Let's see, running down the potential bullet holes...Noesi curveball vs. Andrus, check. Noesi fastball vs. Hamilton, check. Harrison fastball to Wells, check. Datz holds up Ryan at third, check. Blown rally in the bottom of the eighth, check. Guess that's it, time to go to bed! Wait, what are you doing, fingers? Why are you still writing? Why are you moving the cursor to the bullet hole button? Do you mean to tell me that you're actually still going to