Share All sharing options for: Felix Hernandez And Adrian Beltre

Early on, Beltre singled off Felix on a grounder through the hole. This is the pitch that Beltre hit: 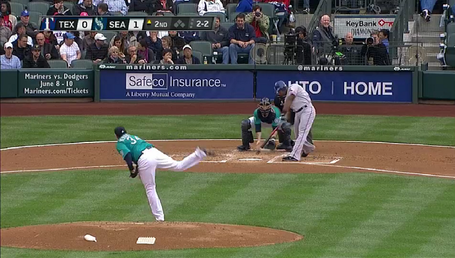 You can see Felix joking that Beltre practically putted the ball. Later, you see Beltre fly out just shy of the track in straightaway center, and that's when things pick up. Felix and Beltre spent much of the bottom of the eighth yelling and gesturing at each other. Beltre was supposed to be playing defense, and Beltre is arguably the best defensive third baseman in baseball, but he was distracted the whole time, which is charming and also dangerous considering he still doesn't wear a cup. I'm uncomfortable with how often we have written about Adrian Beltre's junk.

Beltre and Felix have faced off 13 times - once in 2010, nine times in 2011, and three times in 2012. Beltre is 3-for-12 with a homer, a walk, and four strikeouts. He might've had another homer yesterday in another ballpark. You can see Beltre accusing Felix of doctoring the ball, and Felix showing that he's got nothing on him, but Beltre's had more success against Felix than you might expect given what we know about Adrian Beltre and given what we know about Felix Hernandez.

I wish I had something clever or insightful to say but I do not. Thankfully I don't need to be entertaining because the linked video is entertaining, and you should watch it, even if you've already watched it. I loved when the Mariners had Cliff Lee, because Cliff Lee did nothing but work quickly and throw awesome strikes. Lee was a hypnotic pitcher to watch. But Lee's moments of personality were few and far between, at least on camera. Felix doesn't throw as many strikes as Lee, and he doesn't work as quickly as Lee, but with Felix we get to see an entertaining pitcher and an entertaining person, and that's a big part of what makes him so great. You're the best, Felix. And you're the best, Beltre, for the same reasons. Miss you :(