Every so often, it'll hit me. Maybe I'll be scanning over statistics on Baseball-Reference, or maybe I'll be checking out a player's updated numbers in Gameday. Most recently it hit me when I was thinking about Michael Saunders' above-.700 OPS. We've been dealing primarily with the Seattle Mariners for so long that our standards are kind of warped. What we consider to be the line between acceptable and unacceptable is not the same as it is for other fans of other teams. The Mariners haven't made the playoffs since 2001. That is a very long time. The Mariners haven't won 90 games since 2003. That is a very long time, but a little shorter. I think we've kind of forgotten what it's like to support a good baseball team, and what kind of production a team needs to get there.

The destination has felt far away. The Mariners have been a talented team, but generally they haven't felt like a good team, or a contending team, if those mean different things to you. They've definitely had their moments, but they haven't inspired much consistent confidence at the plate, which is kind of a thing good teams need to do. When you watch a good team, you're supposed to have faith that they're good.

Tonight, we got to see it. Tonight, we got a glimpse of how a good Mariners team might look. I know the Mariners were fresh off a three-game road sweep of the Colorado Rockies, but the Colorado Rockies are terrible, and the Texas Rangers are possibly or probably the best baseball team in the world. If you're looking for a measuring stick, you can't find a better...stick...than the Texas Rangers, and they weren't even starting some clown. The Rangers don't really have any clowns, but it's not like they started Scott Feldman. The Rangers started Yu Darvish, who is supposed to be most excellent, and Darvish hasn't been like we saw him the first time around.

Felix Hernandez and the Mariners beat Yu Darvish and the Rangers 6-1. It was 4-0 Mariners after three innings and there was no let-up from Felix on the mound. It was fantastic to see Felix have so much success against a team that's hit him, but more important than Felix is the way the Mariners looked at the plate. On the year, Darvish has hovered around 60 percent strikes, with a low contact rate. He's had some walk trouble, but he's succeeded by generating bad swings. We've seen the Mariners let guys like Darvish off the hook before, because we've seen the Mariners let pretty much every type of pitcher off the hook before, but tonight the Mariners just didn't swing themselves into outs. Tonight the Mariners' hitters behaved well and let Darvish beat himself, and that's how Darvish wound up with four innings and 96 pitches.

I'm not going to sit here and say the Mariners couldn't have done more, because in the fourth they had the bases loaded and nobody out after a Dustin Ackley single and didn't score again. The Mariners finished with just four hits against Darvish and five hits overall. But they drew seven walks and didn't hurt themselves. The Mariners as a lineup had a terrific approach, against a very good starting pitcher, and we haven't seen enough of that. We haven't seen enough of the Mariners looking like a playoff team, if only for a day.

It's funny - not long ago, Eric Wedge said it was up to the younger players to teach themselves, because the veterans weren't cutting it as offensive role models. Tonight's lineup had Ichiro and Brendan Ryan and an assortment of youth. Maybe Ichiro was the veteran offensive leader tonight. Maybe the younger Mariners hitters don't really need much in the way of veteran presence in the lineup, because they can figure things out on their own. Not entirely - I'm not saying the Mariners should cut ties with the entire instructional staff - but maybe baseball really is a team game played by individuals.

There was obviously plenty of hype coming into this game, given the pitching matchup and given that the Mariners were being visited by the first-place Rangers. First-place teams generate hype, even when they're facing teams that aren't close to first place. We warned you not to get your hopes up, because that's a recipe for getting your hopes dashed. And now look. You set low expectations, and they've been exceeded! I can graph this: 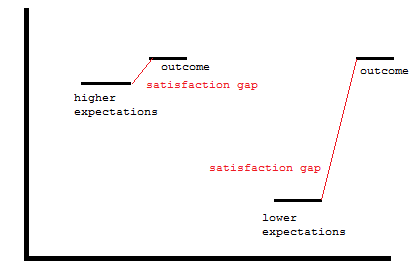 Keep your hopes down, and if people accuse you of being negative, calmly inform them that it isn't negativity. It's preparation, enjoyment maximization, and disappointment mitigation. It isn't negativity at all. Negativity is saying "everything sucks." This is saying "everything is going to suck," and then bathing in pleasure if and when it doesn't.

I'm off track now. Tonight, the Mariners beat the Rangers in convincing fashion. It's one baseball game, and by the end of the year this result probably won't have meant anything, but for this one baseball game we got to watch the Mariners and think, yeah, the Mariners could happen pretty soon. They have many of the pieces, and more are on the way. After so many months and years of thinking it's got to get better in the future, it's energizing to have a night of what the future could be like.

We've reached the point in the evening at which I'm supposed to compose some bullet holes, and as I look over my notes, I have less written down than I thought I would. After all, Felix and the Mariners just thumped a good pitcher and a good team. It's also 11:21 so while on the one hand I wish I had more to say, on the other hand I just gave myself a mental high-five. "The sooner you're done writing, the sooner you can go to bed and think about this baseball game!" "Can't you think about this baseball game while you're writing about it?" "Shut up, brain." "You're the brain!" "Why are we fighting!" I cannot believe that writing is my job. I cannot believe I get paid full-time money for whatever is going on in this paragraph. Let's get to Felix and the Mariners!