Mariners Offense In Pursuit Of History

Share All sharing options for: Mariners Offense In Pursuit Of History

I haven't given it a lot of thought, but I don't think I'm a firm believer in that many things. Evolution, sure, and plate tectonics, and gravity, and basically lots of scientific principles. But with other things, I might be a believer, but said belief might not be firm. One idea in which I am an infirm believer is the idea that something unprecedented is always happening, and you just have to dig deep enough to find it. Today I am applying this idea to baseball and more specifically the Seattle Mariners because I am a one-tricky pony. It's just always the god damned Mariners. I want to write about trees! Once.

On Monday, April 9, the Mariners were in Texas to take on the Rangers. This was Yu Darvish's Major League debut, and in the end the Mariners lost a game in which they led 4-0. In the top of the third inning, Darvish faced Brendan Ryan. Behind 1-and-0, Darvish came inside with a fastball and hit Ryan square in the back. 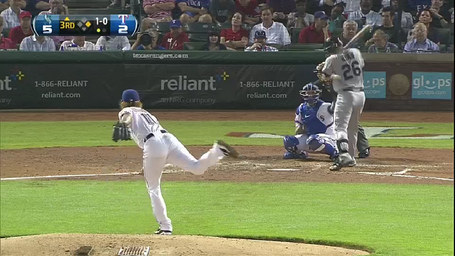 On Tuesday, April 17, the Mariners were in Seattle to take on the Indians. This was a heartbreaking game and in the end the Mariners lost 9-8 despite having led 8-1. In the bottom of the fourth inning, Justin Masterson faced John Jaso. Masterson was struggling, but he got ahead of Jaso 0-and-1. Then he came inside and hit Jaso right in the shin. 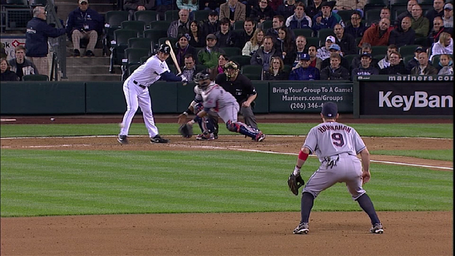 I took FanGraphs back to 1950 because I decided 1950 would be a good time to start. It's a round number, smack in the middle of the century, and while baseball was integrated, it was only kind of integrated. Most people believe the modern era of baseball began well after 1950. But in any case, since 1950, the lowest team hit-by-pitch rate is 0.1471 percent, by the 1989 Padres, who were hit nine times. The current Mariners are beating that rate by 0.000001. It is not literally the narrowest of margins, but it is basically the narrowest of margins.

For funsies, the highest HBP rate is 1.64 percent, by the 2008 Indians. They were hit 103 times. Ryan Garko, Kelly Shoppach, Grady Sizemore, and David Dellucci were all individually hit by more pitches than the entire 1989 Padres team. Jamey Carroll was hit by as many pitches as the entire 1989 Padres team. The team leader in HBPs for the 1989 Padres was a nine-way tie between nine guys with one. No member of the Padres was hit until May 16, or team game number 41.

Anyway, the Mariners haven't been getting hit by pitches. They have been hit by pitches, but I can only barely make that plural. If they keep this up, they will set the lowest HBP rate in baseball's modern era, assuming your modern era begins in 1950 at the very earliest. This is not all up to the Mariners, of course. HBPs are about both the pitcher and the hitter, and if a pitch is fast enough and bad enough, there's no getting out of its way. But the Mariners have gotten this far, and they've demonstrated a certain aversion to reaching first base. With a little hard work and routine stretching to maintain flexibility, Mariners hitters might continue to not get hit by baseballs. And therefore they might set a record.

A year ago, Brendan Ryan was hit ten times. This year, he's been hit one time. Eric Wedge is right, Ryan's really in a funk.