Hector Noesi started for the Mariners against the Yankees on Saturday. Saturday was two days ago. The Mariners played another game against the Yankees yesterday, and they play a game against the Red Sox in a few hours. Why talk about Hector Noesi now, when by the baseball regular-season schedule his most recent start was ages ago? A fun fact, that's why. I'm not referring to it as Today's Fun Fact because this is Today's Fun Fact. Click, read, and savor.

I've already come to Noesi's defense. Noesi allowed five runs and five extra-base hits on Saturday, four of which came with two strikes, but I don't think his pitches were that bad. I think Noesi was more the victim of good hitting than the source of bad pitching, and while I've seen that Geoff Baker disagrees, I've looked at this more than I probably should've. Visually, most of the pitches that got hit were fine. According to the PITCHfx data, most of the pitches that got hit had fine movement. Maybe they weren't all exactly the pitches Noesi wanted to throw, but most were still fine pitches. Anyhow, that isn't what's important. None of this is important when you get down to it but this post is about one event in particular.

Noesi allowed three doubles in the span of four hitters in the bottom of the second. It would've been one thing had the inning ended there, but it didn't - the finishing touches were applied by Jayson Nix, who rode Noesi out to right field. Nix's homer turned a two-run frame into a four-run frame and put the Mariners well behind in the early going.

Here's the 1-and-1 pitch that Noesi threw to Nix: 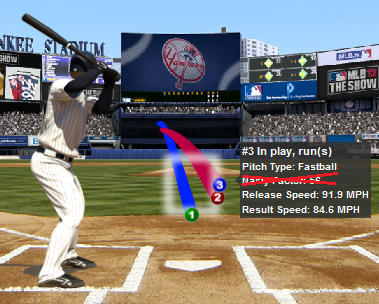 Looks okay, right? Right on the edge. Here's a different look at the same pitch: 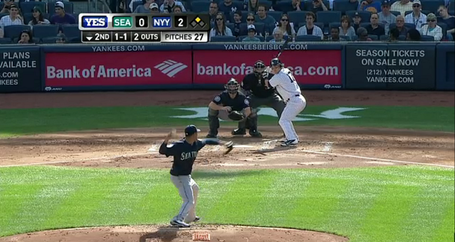 John Jaso wanted the pitch on the outer edge, above the knees. The result: 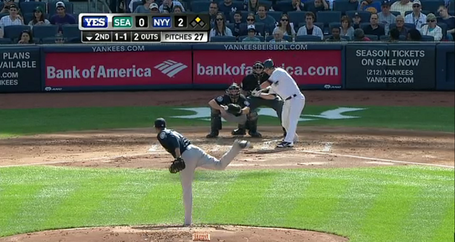 Noesi threw the pitch on the outer edge, above the knees. Noesi essentially hit his target dead-on. Except he didn't, because the ball never arrived at the target, because Nix swung and made contact and hit the ball over the fence.

The ball barely got out. It practically scraped the fence as it descended. According to the Home Run Tracker, the dinger had a distance of 339 feet. That is the fifth-shortest dinger hit so far this season. But wait, there's more! According to the same source, Nix got an 11-foot boost from the wind. Accounting for conditions, Nix's dinger had a "standard distance" of 326 feet, which would've been good enough to hit it out of zero stadiums. And finally, according to the Home Run Tracker, the ball came off Nix's bat at 89.8 miles per hour. That is the weakest home run of the season, narrowly undercutting another Yankee Stadium pile of crap by Chris Iannetta.

Saturday afternoon, Hector Noesi allowed a two-run home run to Jayson Nix. It was Nix's first Major League hit since June 16, 2011. It goes in the books as a homer, never to be edited. But some home runs are different from other home runs, and this was not a home run to be held against Hector Noesi. Critics might say that Noesi needs to do a better job of making his pitches, but in this specific instance, Noesi did make his pitch, and you could say he even got his result. He got Jayson Nix to lift an unremarkable fly ball to the opposite field. Sometimes unremarkable fly balls can leave this particular field, especially when aided by wind. From a binary perspective, in this at-bat, Hector Noesi allowed one home run, and zero not-home-runs. From a more informed perspective, the home run that Hector Noesi allowed was the least worst of all home runs. I bet that makes Hector Noesi feel way better.