A Small Assortment Of Mariners Thoughts

Share All sharing options for: A Small Assortment Of Mariners Thoughts

I decided to take today off and get out there in the spectacular northwest sunshine. Except here I am writing right now anyway, so I guess I mean I decided to take watching the actual Mariners game off. I'm going to write a little something about it. How can I write about a baseball game I didn't watch? You're going to find out! And I've done it a million times before, where I've missed a Mariners game, or I've watched a Mariners game but not really watched it. You know the feeling. I like to call it "2008".

Coming back from where we were all day, I asked Ms. Jeff to check the score of the Mariners game. I didn't want to turn on my own phone because I wasn't in the mood to deal with it. Whenever I miss a game I fear I missed something special, but Ms. Jeff told me "the Mariners lost 6-2." That was a load off, then I wondered if she accidentally pulled up yesterday's game. So the fear came back and I asked her to double-check the date. She said "the Mariners lost 6-2, today." That was a load off.

With the loss, the Mariners fell into last place in the AL West. The Mariners have spent so much time in the AL West's basement the last few years they've got posters and shit up on the walls and a "Mariners' Room, Keep Out" sign on the door, but this is the first time this season the Mariners have been fourth. So that's significant, or that's supposed to feel significant. They're only a half-game behind the Angels, so tomorrow they could get back to third. Or they could stay in last from now through the end of September. Did anybody think the Mariners would keep up with the Rangers? No. Did anybody think the Mariners would take one of the wild cards? Not really. We still want the Mariners to look presentable of course, but the Mariners being in last is less embarrassing than the Angels being in last. The Angels are supposed to do things. Good things, I mean. They've done plenty of bad things. Albert Pujols has a .514 OPS! He has a lower OPS in May than he had in April!

I noticed from tweets and from the box score that Brendan Ryan rode the bench. He had a terrible at-bat at the wrong time Friday night, and in general his numbers are miserable. Said Eric Wedge:

This is where I have no choice but to point out that Brendan Ryan has a .267 OBP and Miguel Olivo has a .229 OBP. Last year, Miguel Olivo had a .253 OBP. And Brendan Ryan provides actual, substantial, measurable value in the field, while whatever value Olivo provides in the field we're supposed to take on faith. Olivo, of course, has power, and I'm not going to sit here and say that Ryan's offense has been acceptable. By and large he's been a mess. But Brendan Ryan has a .190 BABIP that isn't going to last, and his reserve is Munenori Kawasaki, who's a lot more awesome when he isn't actually playing much. Ryan's going to get it sorted out, advancing to the point where his offense is poor but not ghastly. It's fine for Wedge to sit Ryan for a day or two. Wedge should also understand that, in the big picture, Ryan's his guy.

Now then, while scrolling through Twitter it seemed like Hector Noesi had himself a rough outing. Too many extra-base hits allowed, too many of them in two-strike counts. Before doing any research, I prepared to come on here and say that Noesi needs some help developing an out pitch. But then I looked at the numbers and I looked at the video, and what I feel now is that Noesi was more good than bad this afternoon. After reading through a lot of criticism, I investigated on my own and came away encouraged.

First, the straight numbers. There aren't any lies in numbers, and of Noesi's 98 pitches, 68 of them were strikes. That is an excellent strike rate. The Yankees put 23 balls in play, and 11 of them were grounders, which is fine, and actually better than we've come to expect from Noesi. And I think most significantly, Yankees batters swung and missed 15 times. They attempted 53 swings, so that's a contact rate of 72 percent. Noesi's previous high for swinging strikes this year was seven. Swing-and-miss ability! 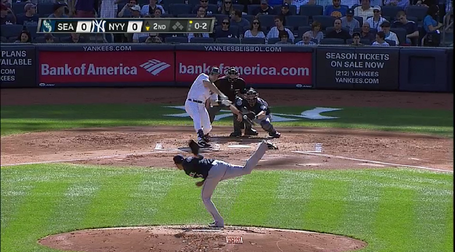 That pitch was in the low-away corner of the strike zone, and Teixeira yanked it. Noesi could've stood to actually miss the zone, a little lower and a little more away, but that wasn't by any means a bad pitch, and had Teixeira taken it, it could've gone either way. Teixeira had to reach to barrel that pitch up.

The second extra-base hit was a double by Raul Ibanez two batters after Teixeira. Noesi threw a 2-and-2 change: 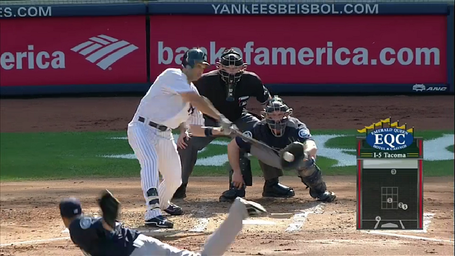 That's low and actually off the plate outside. If taken, maybe the umpire gives Noesi a lefty strike, but that isn't a pitch you'd expect a batter to drive. This was less bad pitching, and more good hitting.

The third extra-base hit was a double by Russell Martin, immediately after Ibanez. Noesi's 0-and-2 slider: 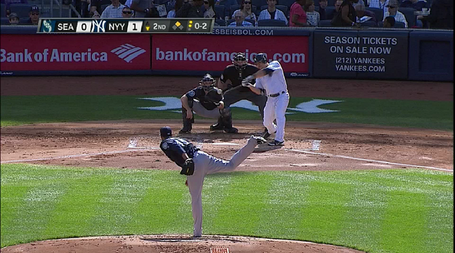 This was a mistake. Noesi left an 0-and-2 slider up and over the plate, instead of low and a little bit off. He got burned, and probably should've gotten burned.

The fourth extra-base hit was a homer by Jayson Nix, immediately after Martin. This was the one that didn't come in a two-strike count. Noesi's 1-and-1 fastball: 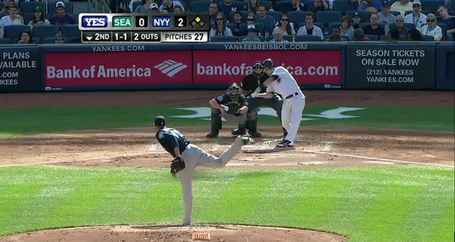 Outer edge, pretty much exactly where John Jaso wanted the pitch to go. Nix punched it over the short right-field wall, barely, and in I think any other stadium, Nix is out. Remarked the Yankees' color guy after the ball scraped the fence: "Noesi really hasn't made too many bad pitches in this inning." He was right. The inning looked bad for its four runs and its four extra-base hits, but only one of those extra-base hits come off a total mistake. The others were either good hitting or lucky hitting. I personally consider Nix's to be lucky hitting but I guess he was well aware how favorable right field can be.

The fifth and last extra-base hit was a homer by Raul Ibanez in the bottom of the fourth. Noesi's full-count fastball: 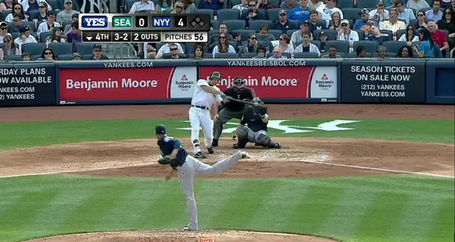 That pitch is up and on or just beyond the outer edge. Gameday identifies it as a fringe strike, which is a good pitch to throw in a full count, and while Noesi did miss higher than Jaso's target, the horizontal location was fine. This, again, strikes me as good hitting. Yankee Stadium is a dangerous ballpark in which to elevate the ball and Noesi did miss his spot, but he didn't miss over the plate or down the pipe. Ibanez went to the border of the strike zone and hit a ball out. Maybe you can chalk it up to Ibanez being on a tear. Remember how Raul Ibanez developed a reputation for being streaky? I usually don't put stock in such things but I don't feel like putting in the work to disprove it. Raul Ibanez, he's so locked-in! He's like a bald Josh Hamilton, or a whiter Carlos Beltran, or a much whiter Matt Kemp!

This afternoon in New York, Hector Noesi allowed five runs and five extra-base hits. His ERA increased to 6.32. I don't think Noesi necessarily deserved all the damage that was done, and while you could argue that maybe his fringe pitches are simply more hittable than someone else's fringe pitches, this was a day that Noesi generated 15 swinging strikes. On this day, Noesi was not all that hittable. He just got hit a few times.

I went in preparing to be disappointed by Hector Noesi, and I'm coming away feeling all right about Hector Noesi. He threw a lot of strikes, he threw a lot of good strikes, and he generated a lot of misses. The Yankees weren't exactly punishing meatballs. Maybe Noesi could stand to expand the zone a little more in two-strike counts, I don't know, but I'm fine with his effort today against that lineup in that ballpark. I mean, sure, Jayson Nix took Noesi deep for a dinger, and that dinger's going into Noesi's stats, but that wasn't a dinger pitch that Noesi threw, and that wasn't a proper dinger ball in play that Nix hit. All in all, decent work by Hector Noesi, no matter what the more negative local media might suggest.

Yay for Mike Carp going deep and almost going deep again. It looks like Carp's injury is completely behind him, which means we can now begin really evaluating Mike Carp. Well not now now. Now it's dinner time! Yay, dinner! And Mike Carp! Yays all around! Except boo for the loss. Yep, sure am broken up about it. (This is not serious.)