Right now, Justin Smoak is sitting on a .492 OPS. Wow, that is a very bad OPS for a Major League hitter! Last season, Chone Figgins posted a .484 OPS. Franklin Gutierrez posted a .534 OPS. Now I've just reminded myself about the existence of Franklin Gutierrez. Remember how he was supposed to be an everyday player for this team?

So, we know the problem with Justin Smoak: he hasn't hit well. He is supposed to be able to hit well and he has not been able to hit well. What I'm about to show you, then, doesn't tell you anything new, but it is a different presentation, and this post is an excuse for me to use a tool I haven't used before. Check this out! 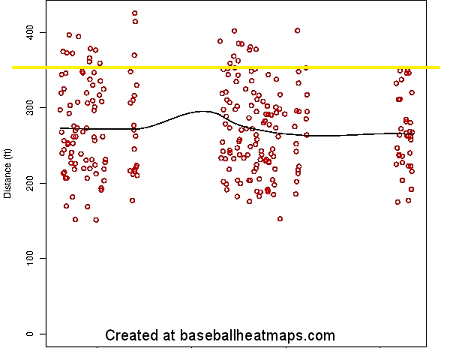 On the x-axis, we have time. This covers Justin Smoak's entire big-league career, from 2010 through the present day. On the y-axis, we have batted-ball distance. Kind of. It's based on Gameday data, and Gameday tells you where a ball was fielded, and not where a ball might have landed. This is the best we can do until we have HITfx, if we ever have HITfx. Please ignore the black curvy line in the middle of the graph. The yellow line, I inserted myself, which shows the furthest Smoak has hit a ball in 2012. After inserting that line I realized it's inaccurate - for whatever reason this data doesn't include a 415-foot homer Smoak hit in Detroit on April 26. So the yellow line, I think, captures the furthest Smoak has hit a ball in 2012, aside from that one home run.

You can see the issue. You already knew about the issue, but you probably haven't seen it presented like this. Look at last year. Look at the red dots above the yellow line, and then look where they stop. That's where Smoak's dreadful slump began. Then he came back and had a decent September. So far, 2012's been a complete mess, outside of that one long home run. Maybe that one long home run is excluded from this chart because the chart thought, naw, there's no way this guy hit a baseball that far.

Justin Smoak has been hurt by having line drives caught. That's probably cost him a handful of singles. Justin Smoak isn't supposed to be a singles-hitter. We've seen only fleeting glimpses of power, and we don't know why. Is Justin Smoak hurt? Has Justin Smoak's swing become slower and therefore less powerful? Something is the matter, and it's highly, highly unlikely to just be bad luck.

The apparent emergence of Kyle Seager makes the Smoak situation a little easier to take. It still isn't easy to take. What's happening should not be happening.