See that new thing over there? The thing that looks like this? 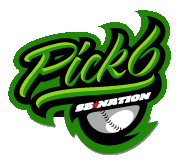 That's a free daily game that we have now for you guys to play. It's fantasy baseball, but it's much simpler than fantasy baseball and doesn't require the time or thought commitment. If you're not into fantasy baseball then you can ignore this, and I'm right there with you, but if you're interested, this couldn't be easier to play, and you can compete against one another. Because this is fantasy baseball, it is not to dominate the comment threads. I recommend that somebody set up a Pick 6 FanPost in which conversation can take place. We will not tolerate Pick 6 taking over all of the conversations on the site. Now then, here's the brief explanatory text I was told to include:

The twist? Each user only has $120 of imaginary money to spend per day, and each player has a different cost. Player values are determined by their production and their popularity in Pick 6.

Successful users will strike a balance between expensive players and under-the-radar talent to take their lineup to the next level. Since this is a daily game there is no draft, no lengthy sign-up process - just you competing against fellow blog members for bragging rights.

It only takes a couple minutes to Pick your 6 - it's so easy to play! Go to the top left side of this blog and click on "Play Now" on the Pick 6 widget. Come back during and after games to see how you and your friends did.

For more information on how to play and how scores are calculated, please go to the Rules