Share All sharing options for: Yoenis Cespedes Goes Impossibly Deep In Baseball Game That Was Also Played And Won By The Mariners

The Mariners beat the A's 7-3. The Mariners scored seven runs! There were just 21 occasions all of last season that the Mariners scored at least seven runs. There were but 15 such occasions in 2010. Hell, today the Mariners scored four runs in the third inning, which is more than they scored last year in 95 whole games. Tonight, the Mariners looked pretty good. But Yoenis Cespedes started a personal nuclear program and got to a launch with remarkable haste. I know that the Mariners looked good, and I know that there are encouraging Mariners things to talk about, but it's Cespedes' homer that I'm going to take away from this evening. The image of where that ball hit has been seared into whichever part of my brain would be the right place to sear an image. Probably the part that controls memory, which would explain why I can't remember the name of that part of my brain.

If you haven't seen the home run yet, watch it right now. Actually, before you watch it, clear the next 30 minutes of your schedule. You're not going to be doing anything productive. Here's where the ball hit: 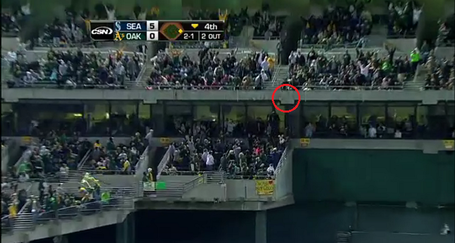 Maybe that doesn't quite capture the distance. Let's pull back a little bit, shall we? 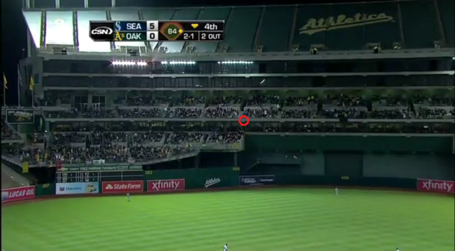 All home runs are impressive. The walls are far away. This home run was unusually impressive. The ball wasn't still rising as it reached solid matter like one of the announcers suggested, but it came closer than most other home runs that I've seen. I saw a tweet from ESPN stats or something that calculated the distance as 462 feet. Maybe that's right, and 462 feet is a whole lot of feet. I still don't find it satisfying, though, so I choose to ignore it. As far as I'm concerned, this home run didn't have a numerical distance. This home run is to be measured by how often you see it in your eyelids when you blink.

Our old friend Graham suggested to me that this home run should be worth two home runs. I'm not comfortable going that far. I am comfortable giving Cespedes some extra credit. I think what should've happened was that the A's get credit for the two runs, and then Cespedes goes to second base. So instead of being a four-base home run, it's a six-base home run. Bonus points for wow factor. The Mariners might've hated it, but then the Mariners shouldn't have allowed it.

I don't want to move on. I don't want to not write about this home run, even though the Mariners just won a game by more runs than they usually score. Yoenis Cespedes hit that ball so hard that when it bounced off the outfield concrete, the concrete block's twin concrete block brother shivered in pain, and a visually unappealing office tower collapsed in downtown.

I do think that Cespedes probably has an air about him. He is a very confident young man, with certain traits. The more he showboats, the more it's going to develop into a pattern, and fans of other teams don't like showboaters. But fans of teams with showboaters love the showboaters, so I think ultimately this is going to be good for all of us. We should want for Yoenis Cespedes to be an annoying talented douche. That'll stir some emotions, which I don't need to tell you have been lacking in Mariners/A's games for years. I've dreaded most Mariners/A's games because there wasn't a whole lot about them that was interesting. If Yoenis Cespedes is a prick, that'll be interesting. We'll want the Mariners to get him out every time. When they don't, it'll be infuriating. Maybe he'll incite a brawl, or maybe he'll just get brushed back a lot. Basically, there's a chance that Cespedes could be for us what Bryce Harper's going to be for the other teams in the NL East.

Look at all of these words about Yoenis Cespedes. Tonight was perfect. Cespedes provided something amazing I won't soon forget. Cespedes provided something else the Mariners won't soon forget. Cespedes laid the groundwork for a more interesting short-term and long-term future. And the Mariners won the game by four. I imagine Chone Figgins wouldn't be pleased that he's not my top story after reaching base four times, but Chone Figgins should just be happy that people don't want to drop his ass as bad today as they might have yesterday.

About Figgins - and here I'm using the jump to switch topics - he really did have a strong game. He lost a ball in the lights in left field, but then he's not normally a left fielder, and stadium lights are bright. It wasn't that important. At the plate, Figgins had a long at-bat in the first, he dropped down a perfect sac bunt in the third, he lined a single to center in the fourth, he put down a perfect squeeze bunt in the sixth, and he dropped a single in shallow left in the eighth. This was Chone Figgins being incredibly annoying, just like we all wanted him to be when he first came over.

It's a game. Figgins entered today 1-for-8. Nothing's resolved. But what I wonder is, to what degree is the consensus opinion of Figgins reversible? With rare exception, nobody who likes the Mariners still likes Chone Figgins. Quite a lot of people seem to hate him. Remember that he was getting booed in Seattle, and players never get booed in Seattle. You'll get a lot of people calling him worthless, and many of those same people can't stand the fact that Figgins is up there batting leadoff.

But what if Figgins becomes okay? What if the Mariners play decent baseball around him? We know that Chone Figgins isn't too far gone, because if he batted .400, we'd all love him. How much does he have to do to get in good graces, or to at least climb out of bad graces?

I'm not trying to argue that Figgins is headed in that direction, because he's got a hell of a lot more to prove. But what I noticed was that, where last season I loathed Chone Figgins, tonight I was okay with him, and in the end even pleased with him. The long offseason of memory erasing didn't hurt. And I realized then that, emotionally, Chone Figgins isn't a complete lost cause. Just as A's fans should be happy that Cespedes could be annoying, I'm happy that Chone Figgins could be annoying, albeit in a super different way.

It's essentially moot. I can't imagine that Figgins rebounds that much. Even if he does, people are going to prefer Kyle Seager. But I'm just in a good mood, because the Mariners have twice as many wins as losses and Yoenis Cespedes hit a baseball to the Great Attractor. When I'm in a good mood, I think about how much Chone Figgins would have to do to get people to like him. Apparently.

Well hell, I wasn't planning on writing that much, so I'll just fly through a handful of bullet holes. I know I usually begin my bullet holes by talking about the day's starting pitcher, but I literally have no idea what to say about Jason Vargas that you guys might find even remotely interesting. He was fine. Threw Jason Vargasy pitches. Served up a home run and a half. Maybe he was a little better than he was in Japan and maybe he was a little worse than he was in Japan, but regardless, he was well within the Jason Vargas margin of error.

Dustin Ackley was awesome but I don't need to tell you that. Tomorrow, at 6:05pm PDT, there's Felix. Tune in if only on the off chance that Felix took exception to Cespedes' behavior. Of course that shouldn't be the only reason for you to want to tune in, because at the risk of repeating myself, tomorrow, at 6:05pm PDT, there's Felix. There are only going to be so many Felix Days before he is dead or you are dead. Think about that, tonight.