There was an old episode of House in which a very young and impossibly attractive Leighton Meester comes on to our hero during a clinic visit. I haven't checked to make sure Leighton Meester was 18 years old at the time of filming, but I also don't think I can get in legal trouble for referring to a minor as "impossibly attractive" as long as that's where I stop so I'm probably in the clear. On one hand, such advances are flattering; on the other hand, such advances are unusual and unsettling. There's reason to be suspicious, basically.

The first most of us heard about Munenori Kawasaki was that he wanted to come over from Japan to the States, and that he only wanted to play with the Seattle Mariners. Such statements were flattering, and such statements were unusual and unsettling. Kawasaki expressed a desire to play with Ichiro. To play only with Ichiro. He expressed a willingness to accept a minor-league contract, just to have a chance to play with Ichiro. The situation was...a weird situation, provoking nervous laughs and concern that Kawasaki was going to murder Ichiro and stuff him and sit him at the table for tea.

What we've learned since Kawasaki first emerged is that he hasn't killed Ichiro yet, and that he might actually just want to be a baseball player. In fact, the whole reason I'm writing this post is because I don't think I've talked about Kawasaki a whole lot, and he just led all of Major League Baseball in spring-training batting average. The backup shortstop brought in on a minor-league deal batted 20-for-44 with 13 RBI. We've assumed that Kawasaki is a glove-first player. Might he actually have a bat worthy of remark?

The first thing we all have to remember is that Kawasaki just batted .267/.310/.327 last season in Japan. Last season in Japan was played with wet sponges instead of baseballs so offense was down league-wide, but Kawasaki still swung a below-average bat. Now he's 30. He's nearly 31. He was much better in 2010, but mediocre in 2009.

Now then, you know who's really similar, probably unsurprisingly? Munenori Kawasaki and Ichiro. I mean, the stills: 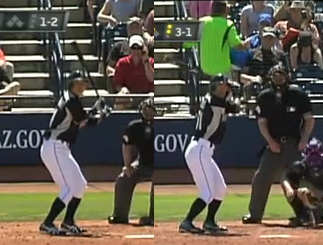 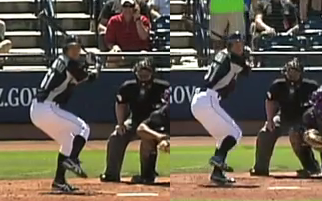 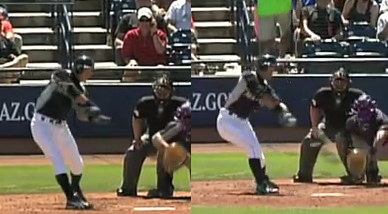 There are some differences, of course. There are many more similarities. In fact, Kawasaki's approach and swing might be the closest to Ichiro's in baseball. If you're not paying careful attention to the TV, you might not know which of them is at the plate. The "I-chi-ro" chants might give it away. But then Kawasaki probably chants "I-chi-ro" when he's minding his own business.

Given similar styles, one might expect similar results. Munenori Kawasaki is not going to generate similar results to Ichiro. Ichiro is a lifetime .326 hitter. But Ichiro just batted .272/.310/.335 last year. I can see how Kawasaki could have a lot in common with Bad Ichiro.

Then I looked at those balls in play. This information was available for every game. There were 43 of them, with the following breakdown:

And, all the bunts. Lots of bunts. Some as sacrifices, some trying for hits. In 2009, Kawasaki finished with 43 sacrifice bunts. The man's a bit of a bunter.

Offensively, spring training numbers be damned, I can buy Munenori Kawasaki as Bad Ichiro. Maybe he has more upside than that, but not by much. Of course, the thing about Bad Ichiro is that the numbers would've been tolerable coming from a middle infielder with speed and defense. Kawasaki might not be good enough to start often. He might be good enough to start sometimes, or fill in.

So that's Munenori Kawasaki, in my estimation. You can see why he made the team, and you can see how he might stick around with the team provided he can handle second base. He won't often be a hero, but he can contribute, and he's not bad for a player who essentially fell in the Mariners' lap. He's better than some players the Mariners have sought out. It's good that Kawasaki should be useful, too, because there are a lot of jokes I still want to make. The schedule just ripped the talking stick jokes right out of my hands. Let me at least have this.