Last year there were exactly 3,000 comments in the Opening Day game threads for a game that began at the normal 7pm time. This year's game began at 3am local time and lasted almost until sunrise. It did not matter much. There were 2,774 comments. 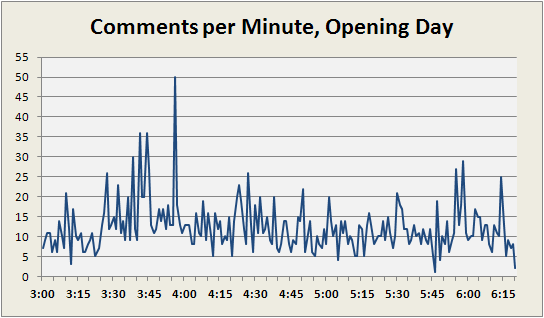 While the threads were open before and after game action, there still was, on average, roughly a new comment every four seconds during the game.

This isn't a post to brag about our comment numbers, nor is it about anything specific recently; the opposite in fact. It's time for a yearly reminder to try and restrain your posting frequency a bit in the game threads. Commenting is free and like any good that's free, it runs into the problem of overcrowding.

Fewer comments overall isn't the goal here, it's fewer isolated comments. You probably know the type, the single comments that generate no replies, left sitting there like an island adrift amongst so many exclamations, GIFs and battered by wave after wave of depression. They aren't all bad, but they do tend to be superfluous. Often they are reactions to game events like strikeouts and hits. Again, that's not bad. I understand; sometimes you want to express a hilarious new way that you want to pleasure Dustin Ackley after another clutch hit.

Will people see your witty comment though? If 50 comments fly by after even minor developments in the game, good comments are missed; needles are lost in a haystack. Without people willing to sacrifice a little of their desire to share every emotion for the greater good that is thread readability, everyone suffers. That's not to say you should completely neuter yourself. We don't want fewer needles. We want a smaller haystack so the needles are easier to find.

So instead of rushing to post "K!!" after each strikeout or "Woohoo" after each big hit, consider waiting for someone else to post a comment about the play and then respond to that comment with your take (and perhaps with a bit more than just "woo!"). That way, we can start building up more and longer subthreads. Those are desirable because they breed engagement and mingling between the members here. They create the community and it's that sense of kinship that can make game threads so damn fun. It unites us and heightens our joys. It helps blunt our disappointments because we share them together.

In summary, try to spend less time starting subthreads and more time building subthreads. Similarly, you can use your profile page to look back over your recent comment history. If many of your comments are not getting replies, that's a powerful signal that you should consider how to better add something original.

Similarly to that, please don't narrate the events of the game or, as mentioned in the Following the Mariners FAQ, ask questions that can be otherwise answered from the game casts. We want game threads to be a place for people to interact and entertain each other, both relating to the game and not. Being able to have back-and-forths is essential to that. Let's keep that goal in mind as we go forward this season.