Think about how different the game story might be tonight if Blake Beavan gets a called strike on Eric Thames in the bottom of the fourth. This is going way back. Remember how this baseball game was started by Blake Beavan and Ricky Romero? Remember how Romero was throwing a no-hitter? Thames was batting with one out and a runner on second. In an 0-and-2 count, Thames took a fastball practically right down the middle. It was an inarguable strike, but it was ruled a ball, and Thames eventually singled. The Blue Jays eventually scored two runs.

Think about how different the game story might be tonight if Brett Lawrie throws Kyle Seager out in the top of the ninth. When Seager came up with two outs and rolled a grounder to third, I reached for the remote. I had it in my hand, and as I was looking at it for the power button, Lawrie's throw to first bounced and Lind couldn't haul it in. I wasn't even watching the screen when Seager reached. But Seager reached and I put the remote back down. The Mariners lost. I mean, the Mariners basically lost this game. When the ball came off Seager's bat, everyone was thinking the same thing. Everyone began coming to terms with the loss, and then there wasn't a loss to come to terms with.

Think about how different the game story might be tonight if Colby Rasmus doesn't inadvertently knock down John Jaso's line drive later in the top of the ninth. Jaso singled up the middle with two outs to tie the game, with his liner dropping just in front of a diving Rasmus. The ball skipped by Rasmus' glove, and then this happened: 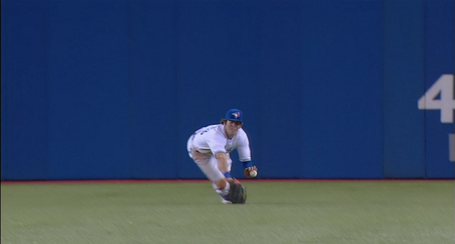 Rasmus blocked the ball completely by accident. That allowed him to recover and get Dustin Ackley thrown out at home. If that ball misses Rasmus' bare hand, Ackley scores easily, and the Mariners pull ahead. Hell, maybe Jaso scores too, because he's quick for a catcher, and Rasmus didn't have any support behind him. Then maybe there's no extra innings.

Had the Mariners won in the ninth, we would've wound up with the same discussion as before. John Jaso would've been the biggest hero, and then all anyone would want to talk about is John Jaso's playing time, versus Miguel Olivo's playing time. I'm not saying it isn't a conversation worth having, over and over. John Jaso needs to play more, and Miguel Olivo needs to play less. That's it, regardless of what Eric Wedge says or believes. But if John Jaso is the big hero tonight, then people emerge both ecstatic and annoyed. They're ecstatic about the win, and annoyed that Jaso's a virtual ghost on the bench.

The way the Mariners won - nobody's emerging the least bit annoyed after the way the Mariners won. This was a feel-good win, an improbable win, sealed by the power bat of Michael Saunders. Michael Saunders is what people are going to be talking about and thinking about. There'll be other stuff - Jaso will be in there, and some other decisions and plays will be in there - but the spotlight's on Saunders for hitting late dingers in back-to-back innings. The spotlight's on Saunders for maybe, actually turning into a quality everyday player, just when people had finally written him off.

I don't think there's a Mariners fan alive who doesn't want the best for Michael Saunders, and who hasn't been disappointed by Saunders' failure to blossom. He's absolutely charming, and his skillset is so appealing. But at the start of spring training, who thought anything about Michael Saunders? He wasn't in the picture. He was going to be a roster casualty, or he was going to head back to the minors.

Then when Franklin Gutierrez got hurt and Saunders stepped in, who really believed his explanation about having a new swing? Who really believed that Michael Saunders could've been fixed by Josh Bard's brother, thanks to a program that Saunders can hardly himself explain? There are camp stories worth listening to and camp stories worth ignoring, and I think the overwhelming majority of us figured Saunders was going to be the same old Saunders.

Today is April 27th. Michael Saunders has batted 67 times, which isn't a lot, but which isn't a little. He has an .852 OPS. He has two strikeouts for every walk, instead of more than three strikeouts for every walk. Nine of his 15 hits have gone for extra bases. He's shown power that isn't just pull power. This could all absolutely just be a flash in the pan. It's 67 plate appearances. This could be Michael Saunders overachieving, the way Albert Pujols and Giancarlo Stanton are underachieving. But Saunders has the best numbers out of all of the regulars. Much like Lucas Luetge, he didn't figure in the picture in the beginning, but he's gotten a chance and he's grabbed it by the testicles. And then he's squeezed it a little bit, to let it know he's there.

What a catastrophe right now, the Angels. A shame they don't have players like Michael Saunders and John Jaso. I'm 95 percent certain this is going to look ridiculous in a few months when they've breezed by the Mariners in the standings, but that might not happen, and even if it does happen, it hasn't happened yet. The Angels will be looking up at the Mariners at the end of this month.

It's interesting that Michael Saunders has re-emerged thanks mainly to an injury to Franklin Gutierrez. It's interesting that Michael Saunders had his best game of the season on the day word got out that Franklin Gutierrez has plantar fasciitis. You wonder if they're connected. I was reading the other night about how psychopaths are charming and charismatic. It makes you think. Now it's making you think.

I don't want to stop thinking about this game. I'm no stranger to referring to hockey when I'm writing about baseball, and recently I was watching a lot of playoff hockey. The highs and intensity level of playoff hockey are unlike anything else. But in the later innings tonight, I got sucked in to an unusual, extraordinary degree. I didn't want to sit down. This was an awesome baseball experience, and because I know all about baseball and momentum, I know there's no guarantee tomorrow will bring another awesome baseball experience. So I want to dwell on this one for as long as I possibly can, because, man, what an experience.

Now some bullet holes. What do I even have left? Let's all find out together.

Tomorrow it's Kevin Millwood and Brandon Morrow at 1:07pm. Let's go ahead and not think too much about tomorrow. Live in the present. Live this day as if it were your last! But don't actually do that, that's really bad advice.