Tom Wilhelmsen And The Matter Of Credit

Share All sharing options for: Tom Wilhelmsen And The Matter Of Credit

Yesterday morning, the Seattle Mariners started playing the Detroit Tigers. Yesterday afternoon, the Seattle Mariners were still playing the Detroit Tigers, and in the bottom of the eighth inning, Tom Wilhelmsen struck out Prince Fielder swinging with a full-count curveball. I wanted to use a post to re-visit that curveball - both because that curve and swing have stuck with me, and because Dave practically dared me on Twitter to write a love song about it. I'm not going to write a love song about it, although I'd be lying if I said I didn't consider it later last night. I'm going to write this post about it.

It was a hell of a curveball, for those of you who were or were not watching. The five pitches Fielder had seen from Wilhelmsen were all fastballs. Good fastballs, since Wilhelmsen has a good fastball, where by "good" I mean "fast". I don't know if the sequence messed with Fielder's timing, but he got tied up and swung right through a sharp hook. Maybe it had something to do with the fastballs. Maybe it had nothing to do with the fastballs.

I was interested in re-watching the video of the curve because all I really remembered was a curve and a whiff. I wanted to fill out the rest of the details. After watching, here's something I noticed. Check out where Miguel Olivo wanted Wilhelmsen to throw the pitch: 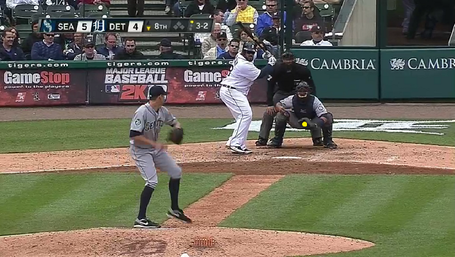 Knee-level, I think over the outer half. Not a bad spot for a full-count curveball. There wasn't anybody on base, so it's not like Olivo had any reason to set up somewhere other than where he wanted the pitch as a trick. 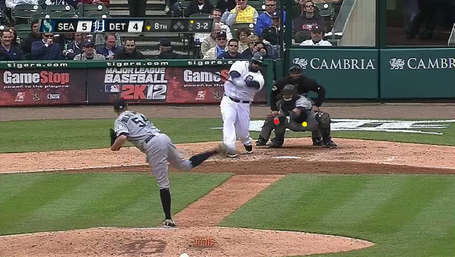 The yellow is the initial target, and the red is where the ball wound up. Obviously, the ball wound up in a good place for Wilhelmsen, as Fielder swung right through it. Wilhelmsen's curve generated the best possible result: a full-count swing and miss. However, here's where we get to thinking. Yesterday I gave Wilhelmsen a ton of credit for the strikeout. And why wouldn't I? He struck out Prince Fielder, swinging. But the strikeout pitch also missed its target, and by kind of a lot. The vertical location was more or less right, but the horizontal location was not. Olivo presumably didn't set up inside because he didn't want to give Fielder an opportunity to pull the curve to right for a game-tying dinger.

So it's interesting to think about how much credit Tom Wilhelmsen deserves. Not that it matters for anything - players don't accrue credit. They can't redeem credit for toys or bubble gum. But I remember reading an interview with a Phillies prospect not too long ago, and he talked about how he would grade every pitch he threw based on whether or not he executed. If he executed and gave up a hit, so be it. If he didn't execute and got a whiff or an out anyway, so be it. It wasn't about the at-bat result for the prospect - it was about the pitch. The pitch is all a pitcher can control.

Tom Wilhelmsen threw a sharp breaking ball, that Prince Fielder swung at and missed. The breaking ball didn't go where it was supposed to go, but it got a whiff anyway. This kind of thing happens all the time, because every game features a few hundred pitches, and many of them miss their targets. I'm focusing on this one in particular because it was awesome and important. How much credit should Tom Wilhelmsen get? The answer doesn't matter, but sports are here to give us something to think about, and this is something I think is worth thinking about.