A year ago, the Mariners averaged 3.4 runs per game. The team offense was a catastrophe. But in ten games against the Tigers, they scored 54 runs, including 13 runs in one game on April 19th. In 6% of the season, the Mariners scored 10% of their runs. The Mariners team the Tigers saw was most definitely dangerous at the plate.

It made things awkward this past offseason. When Tigers general manager Dave Dombrowski heard that the Mariners had interest in signing Prince Fielder, he didn't understand why. "What do they need a bat like that for?" he asked. "They must be trying to build a juggernaut!" Dombrowski and Tigers ownership made the commitment they did to Fielder in part because they wanted to keep him from Seattle, in fear of the Mariners building the best lineup in history.

All right so now that we're getting down to business, I actually couldn't pay as much attention to this game as I usually do, on account of other work concerns. So coming up with a more standard recap is difficult. In lieu of that, I'm going to address just a small handful of things with supplementary screenshots from highlight video. Let's get to the disjointed game coverage!

I think the part of the game that made me feel the best - among the parts of the game I could watch and pay attention to - was Tom Wilhelmsen's effort in the bottom of the eighth. It actually started poorly, when Miguel Cabrera and Prince Fielder opened with consecutive singles. Delmon Young followed with a long fly out to right-center that came alarmingly close to leaving the yard and putting the Tigers on top. The pitch that Young hit was a 96mph fastball down and in, and I don't know how he hit it the way that he hit it, but the Mariners came that close to a probable loss. Nearly every win was at some point close to a probable loss.

After Young, the Tigers had one out and runners on the corners. The score was 6-4, and the batters due up were Jhonny Peralta and Alex Avila. Peralta worked the count full against Wilhelmsen, but then Wilhelmsen dropped in a spectacular curveball that froze Peralta and caught enough of the zone. Curves aren't swing-and-miss pitches. When a curve is working best, it leaves the batter frozen and helpless. Peralta was frozen and helpless.

That brought up Avila, and he didn't require quite so much work. Wilhelmsen fell behind 2-and-0, as he did with Peralta, but he fought back with two curves and then ended the inning with a perfect heater:

95 miles per hour, right where Miguel Olivo wanted it on the outer edge. All Avila could manage was a defensive swing that was more of a wrist-y hack. He swung through the ball and the Mariners were on their way to a win.

The part of the game that made me feel the second-best was in the top of the third. Michael Saunders came up with two on and two out and swung at this pitch: 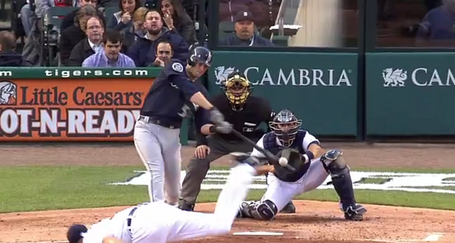 That was a 1-and-1 changeup down and on the outer edge. Previously, we would've expected Saunders to pull off this pitch, missing it or popping it up or hitting it off the end of the bat. What Saunders actually did tonight was drive this pitch deep to left-center, over Ryan Raburn's head and off the wall for a two-run double. This was the Michael Saunders that got us excited in spring. In March, Saunders flashed some power to the left-center gap, which we hadn't seen before. Now we've seen it in a meaningful game. Not often - this is one double - but a glimmer is better than no glimmer.

In the ninth, Saunders faced lefty Phil Coke and pulled a curveball down the right-field line for another double. We've seen Saunders' pull power enough, but it was good to see him hurting a southpaw. It still wasn't a brilliant game for Saunders overall, as he had a double bounce off of his glove and as he made three outs, including one strikeout with the bases loaded and a strikeout with runners on second and third after getting ahead 3-and-1, but Saunders was more positive than he was negative, and right now he has a .719 OPS. It's something. I don't know if Michael Saunders has seized his opportunity, but he hasn't blown it.

In the top of the seventh, with the Mariners in need of some insurance, Alex Liddi came up against Collin Balester with one out and none on. The count ran 2-and-1 when Liddi got this heater: 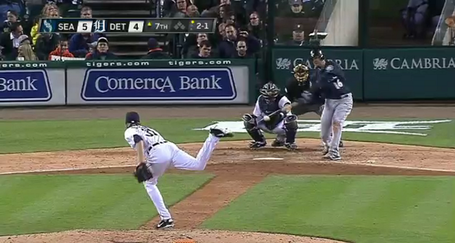 Liddi blasted that pitch over the fence for his first home run of the season. I wasn't sure about starting Liddi tonight with a righty on the mound, but Liddi finished with three hits, including a dinger. I wasn't certain why Liddi was on the roster when he wound up on the roster, but he's made a strong contribution in limited time.

The count was 0-and-1. The pitch was a cutter. Olivo wanted to see if Vargas could stay low and get Cabrera to put the ball on the ground. Vargas was like, "well sure I could do that, but I don't really feel like doing that, because this ballpark's got a spacious outfield, and fly balls just uh oh"

I don't want to pretend like it was a given that Cabrera would hit that pitch out, because even the best hitters in baseball don't turn every meatball into a dinger, but few hitters turn meatballs into dingers quite like Miguel Cabrera does. And few hitters have Miguel Cabrera's dinger swing follow-through: 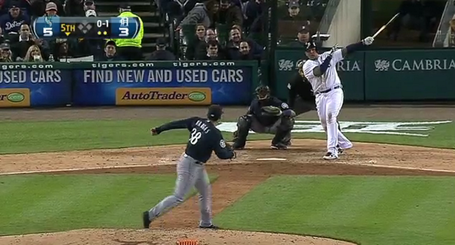 More baseball tomorrow, with Felix and Adam Wilk, who is probably nice. You never want to miss a Felix Day because each one is a treat, is something I've learned not to say. Sometimes they can be emotionally devastating. But you should still watch.